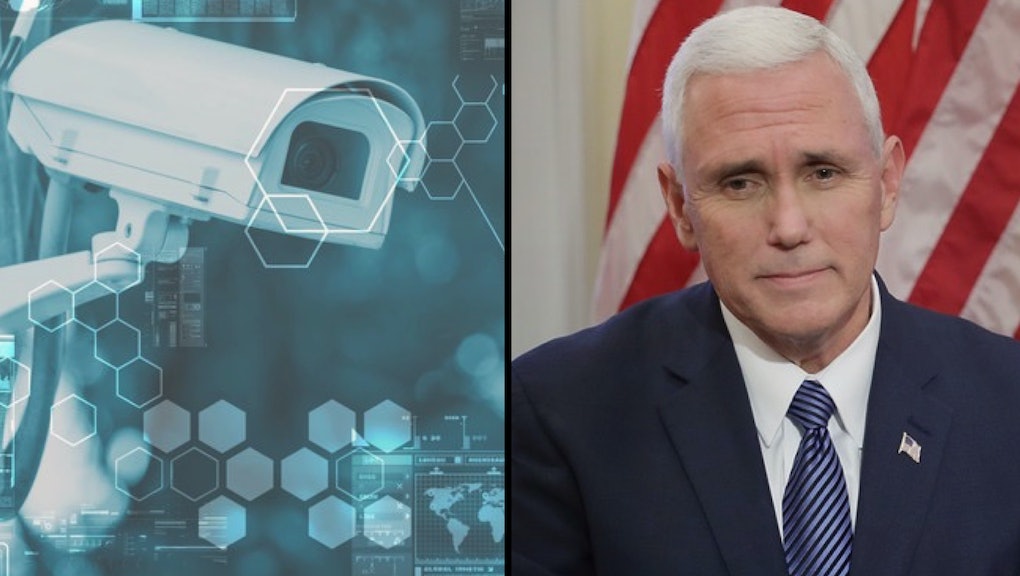 In a Wednesday night interview with Fox News, Vice President Mike Pence told the network "the American people have a right to know if there was surveillance of any private citizen in this country." What he did not mention, of course, is that the American people currently do not have that right thanks, in part, to one Mike Pence.

The vice president was responding to a question about whether or not former national security adviser Susan Rice should testify before the House Intelligence Committee about her requests to the FBI to unmask the names of Trump officials in intelligence reports about Russia. It's something Rice admits to doing, but insists she did not do for political reasons. Some conservative outlets have also accused Rice of leaking details of a conversation between former national security adviser Michael Flynn and Russian Ambassador Sergey Kislyak, a charge she denies.

Still Pence told Fox he's concerned about Rice and that such surveillance powers should be "troubling to anyone who cherishes civil liberties in this country."

His concern about civil liberties and the surveillance of private citizens is not unwarranted. For decades privacy rights advocates have worried about the federal government's increasing power to surveil it's own citizens — powers that were dramatically expanded over the past decade, thanks in part, to Mike Pence.

As a member of Congress in during the Bush administration, Pence voted for a number measures to expand the surveillance state, including several measures that loosened restrictions on monitoring American citizens.

"The Protect America Act and the FISA Amendments Act of 2008, both dramatically lowered protections that would generally apply and they opened the door to a lot of Americans communicating with foreigners," Neema Singh Guliani, legislative counsel with the American Civil Liberties Union focusing on surveillance, privacy and national security, said in a phone interview.

As for that "Americans have the right to know" assertion, well, those laws also limit the extent to which private citizens have a right to know they are being or have been surveilled. "If the government is collecting my information under [the FISA Amendments Act] I likely have no way of finding that out," Guliani said. "The idea that you have a right to know that doesn't exist under our current national security laws."

According to Guliani, the powers granted to the intelligence community under the FISA Amendments Act, could have been used to justify monitoring of former national security adviser Michael Flynn during his conversation with Russian Ambassador Sergey Kislyak.

During his time in Congress, Pence also voted against some measures that would hold the newly empowered surveillance state accountable, including one measure that would have required the Justice Department's Inspector General to provide reports to the House Intelligence Committee about the number of American citizens being surveilled.

Perhaps, now that Pence has voiced some newfound concerns about the U.S.' expansive surveillance powers, he will reconsider some of his previous legislative decisions.  Until then Pence should consider conducting his private conversations behind closed doors.