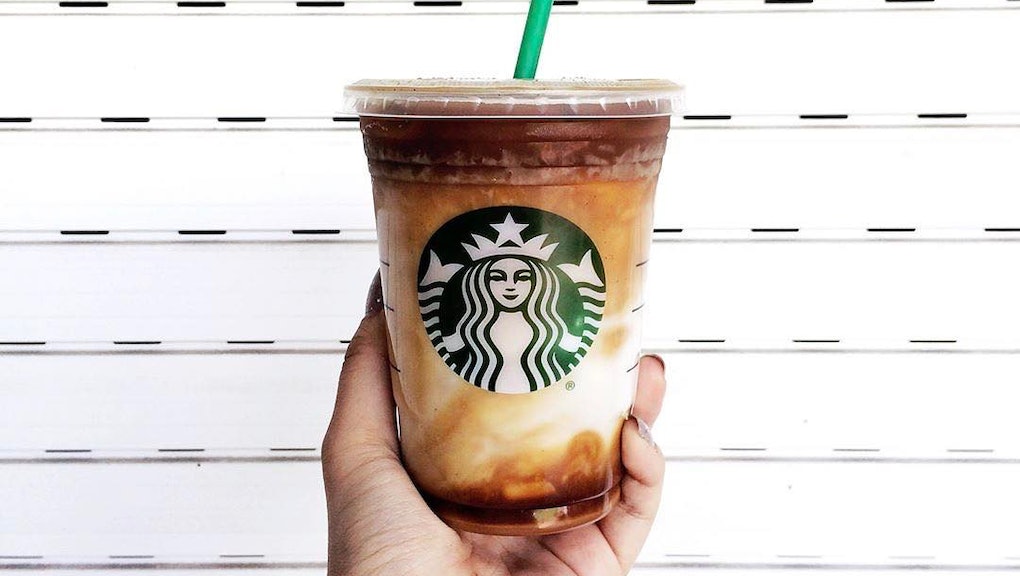 Starbucks isn't known for it's low, low prices. You can easily spend over $5 on a coffee or tea without even thinking about it, which is especially easy thanks to app payments, hoarded gift cards and sometimes covert menu pricing that makes it a little unclear what you'll actually pay for a drink upgrade or an off-menu item.

But if you want to cut back your Starbucks budget with out reducing your caffeine habit, a few hacks will help you get your regular order, for less money, so you can keep visiting your beloved green mermaid.

These five tricks can help you hack the menu, so you can enjoy your favorite Starbucks sippers without needing to take out a loan (dramatic, we know).

Instead of ordering an iced latte, ask for a doppio — or double shot of espresso over ice — in a grande or venti cup. Then, head over to the milk table to fill it to the top and voila, cheap latte! If you like your lattes flavored, feel free to request syrup for an additional charge (usually 50 cents). Still though, you're saving cash by not saying latte, though some stores have started to catch on to this easy trick. In New York City, a shot of espresso costs $1.95, with additional shots at 80 cents each, bringing a fake iced latte to $2.75  or $3.55, when a tall iced latte, with only one shot, costs $3.45.

Gold card members are entitled to free refills of hot or cold brewed coffee, iced coffee and tea in the same store during the same visit. So if you're planning on sitting in the cafe for hours on end, order something simple and load up on refills of the same drink. Non-gold card customers can also get refills of these drinks for 50 cents!

Get 10 cents off your drink order when you bring your own reusable cup! Not only are you helping the environment, but you're saving change while getting the exact same drink at a lower cost. Plus, you get to carry the thermos or mug of your choice and not a silly paper cup.

Ask for a bigger cup

Requesting room for milk? Opt for a larger cup instead. Order your tall coffee in a grande cup or grande coffee in a venti cup to get more coffee (they just eyeball the fill level) and have more space for milk than if the barista left empty space at the top in the standard sized cup for the same cost. Usually get a venti? Request a trenta cup — or stay in the store for your free refill!

Like the feeling of a large cup in your hand? Grande and venti iced drinks both have two shots of espresso, ventis just have more milk — why pay for that? Order your grande iced macchiato or cold brew in a venti cup with extra ice, and top it off with your own milk at the milk station — you'll get more volume for the same price.

Getting coffee with a group or planning to drink a lot of brew in one sitting? Order an off-menu French press, which is about 32 fluid ounces, or almost three tall cups! Not every Starbucks offers a French press that you can take to your table, and prices may very with the type of beans they use, so ask about pricing and availability at your local Starbucks.

Reddit user therewillbesnacks recommends ordering an Americano instead of a brewed coffee, which may cost a little more but packs in extra caffeine. To amp up your energy, don't ask for an extra shot but rather a grande Americano in a tall cup, which will get you three shots of espresso without paying for an extra shot. Therewillbesnacks says this costs an extra 30 cents instead of the extra 70 cents for a shot of espresso.

While buy-one, get-one-free days are a great reason to share a sweet Starbucks beverage with a friend, consider every day BOGO day if you and a pal enjoy the same flavor Frappuccino. A tall Frappuccino is 12-ounce, while a venti is 24-ounce but a venti is never twice the price of a tall. Order a venti, request a extra cup and split it. If you're nice, the barista may even do the messy part for you so you can share two tall Frappuccinos for a little more than the price of one.

Ethically, you can decide if this is stealing or just doing the sensible, thrifty thing. Capitalism, right? If you order a basic drink like brewed coffee or iced coffee with soy milk or coconut milk, the register will ring up this order with an additional charge (usually 60 cents). If you're a non-dairy milk drinker, instead head to the bar where it may already be sitting out or request that a barista kindly pass the container or soy or coconut milk. Some will, some may request that next time you order it the proper way, but either way, you just saved some change.

*A representative for Starbucks confirmed that Starbucks prices vary by market. Savings with these hacks (which are not Starbucks endorsed or necessarily approved) may change by region.