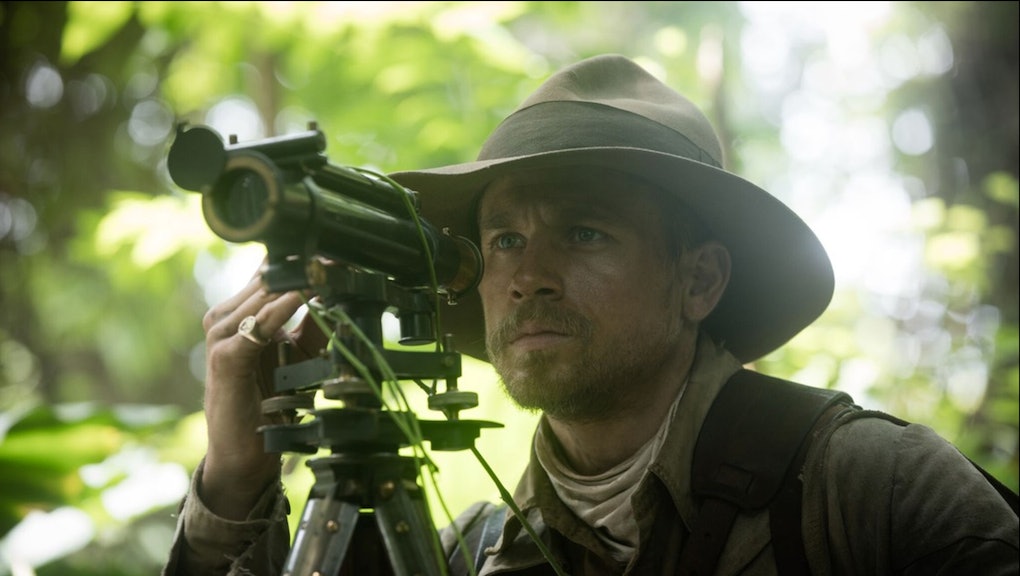 The true story of a famed adventurer disappearing in the expansive Amazon rainforest without a trace is a tempting enough premise for a film, but The Lost City of Z is much more than that. It's a stunning adventure epic, yes — and the horror stories of the jungle setting from the production for it might be a worthy film in and of itself — but The Lost City of Z also offers a fascinating exploration of legacy, both on an individual level and for an entire empire.

The Lost City of Z chronicles the life of British adventurer Percy Fawcett, played by Charlie Hunnam, starting in the early 20th century. Fawcett's a capable major in the British army, but he's beset by his own family name. It's only glossed on briefly, but Fawcett's father was a disgraced drunk and gambler; something Fawcett can't shake off. When he's successful on a hunt in Ireland — an impressive feat of masculinity, badassery, etc. — he's denied the opportunity to join the higher-ranked officers for dinner as one scoffs that he is "unfortunate in his choice of ancestors."

This tainted legacy pushes Fawcett to accept a daunting task from the Royal Geological Society, in which he's to chart a border between Bolivia and Brazil by traveling through the Amazon rainforest. The journey, which ostensibly includes exploring areas of the continent that have never been charted before, is unsurprisingly treacherous, but a successful excursion would redeem his family's reputation. So Fawcett travels to Bolivia accompanied by a small team, including his aide-de-camp Henry Costin, played by a scruffy Robert Pattinson. It's on this cartographical mission that Fawcett is told the story of a lost civilization in the jungle — one of gold and maize — that's never been seen by a white man. Fawcett and the rest of his team are skeptical of the tale their indigenous guide tells them, but a brief window into what he later refers to as the "City of Zed" piques a lifelong obsession.

However, as Fawcett reclaims his legacy after a successful trip, he's again denigrated — this time for his talk of the ancient Amazonian civilization. The reason being that "Zed" would pre-date Britain, and the British empire cannot feign the notion that "savages" could have constructed something so advanced in its time. It's the other legacy The Lost City of Z examines: early 20th-century Britain. The film puts into perspective just how ambitious Fawcett's journey is. Not only is he trying to find a hidden city, he's subverting the idea that Western Civilization is inherently superior. It might not be sacrilegious on the level of Galileo's theory that planets revolved around the sun, but it's certainly close.

The rest of The Lost City of Z follows Fawcett's life after his first trip, which included a second excursion that's ruined by an amateur explorer, and the first World War that thrusts him back into military service. Costin is a loyal companion by his side — even during the war — until Fawcett's eldest son Jack, played by Tom Holland, has the same thirst for adventure. Fawcett's extended absences take a toll on his wife Nina, played by Siena Miller, whose strong-willed nature would've made her a worthy adventurer in her own right, had she lived in a more progressive age.

Of course, The Lost City of Z's effectiveness also hinges on its scenes in the Amazon, and director James Gray frames an encompassing atmosphere (and well, read the stories from the set and you'll see why). It can be frightening in one moment — such as, the typically placid water suddenly swarming with piranhas — and hypnotic in the next. It's perhaps Fawcett's aide-de-camp that describes it best: It might be hell, but it's a hell they want to return to.

While Gray takes a lot of his narrative from the book of the same name by journalist David Grann, he has the challenge of finishing his film cohesively. Fawcett and Jack disappear in the jungle without a trace in 1925, and while there are compelling theories to their fate, nothing is definitive. Such ambiguity might cheapen lesser films, but Gray's able to make The Lost City of Z's improvised ending some parts poetic, sad, haunting and ethereal — much like Fawcett's enduring legacy for adventure.