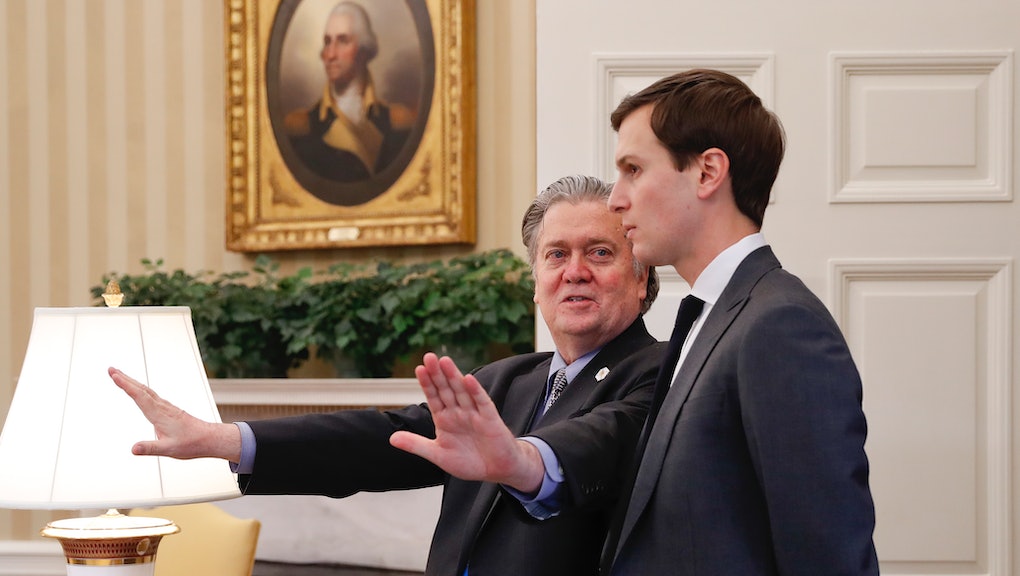 The animosity between President Donald Trump's senior adviser and son-in-law, Jared Kushner, and his chief strategist, Steve Bannon, has apparently devolved into a surreptitious name-calling situation.

According to a Daily Beast report, Bannon calls Kushner "cuck" and "globalist" when Kushner isn't around.

The White House official who spoke to reporter Asawin Suebsaeng added that while the pair frequently argue "face-to-face," Bannon has lately accused Kushner of trying to "shiv him and push him out the door."

The word gained political potency during the 2016 election in the portmanteau "cuckservative" (cuck + conservative) used to imply that the mainstream conservatives of the Jeb Bush variety are weak and effeminate.

Globalist, meanwhile, is a logical diss from a man who seems to revere nationalism above pretty much all else. As Suebsaeng pointed out, the specter of globalism, when it's evoked by a member of the far right, can connote anti-Semitism. Kushner is Jewish.

Bannon seems to be losing ground within Trump's administration, with news breaking on Wednesday that the president removed him from the National Security Council.

Kushner, meanwhile, is busy doing all the jobs — forging peace in the Middle East, figuring out how to run the government as a business, smoothing diplomatic relations with China, keeping it cool while visiting Iraq. It's really quite an intimidating to-do list for a man with a professional background in real estate and media.

Bannon doesn't seem to think so, though. He reportedly threatened to quit over the perceived power imbalance tipping in Kushner's favor.