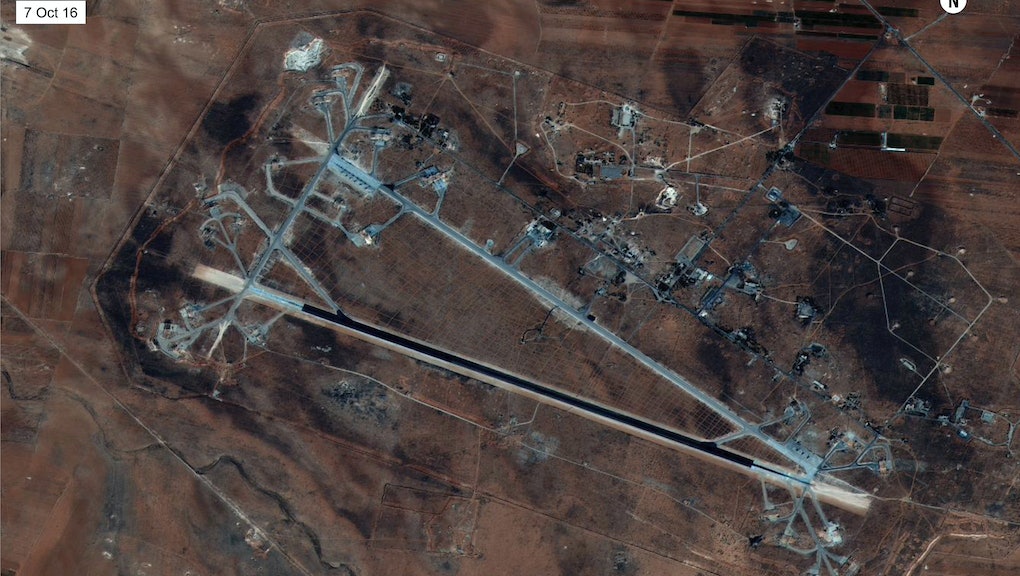 In 2013, when Syrian President Bashar Assad launched a chemical weapons attack that killed more than 1,000 of his own people, more than 100 members of Congress drew a line in the sand.

If then-President Barack Obama wanted to respond to Assad with a military operation, Obama would need to get congressional approval. Striking without that approval would be "unconstitutional," 116 members of Congress wrote in a letter to Obama in August 2013.

Then this: Obama went to Congress to get approval for a strike, but was forced to postpone a vote when the vast majority of House Republicans said they would not give him the OK.

On Thursday night, President Donald Trump launched a military strike on a Syrian airfield after a similar, but smaller-scale chemical weapons attack — without prior approval from Congress. But now, some of those same lawmakers who once called such action "unconstitutional" are praising Trump.

Here's a list of members who are singing a new tune as of this week.

In 2013, Barletta signed onto the letter demanding Obama get congressional approval for a strike in Syria.

Barletta went on to vote against giving Obama approval for a strike after that attack, saying in a statement at the time, "I do not believe the necessity of American involvement has been demonstrated."

On Friday morning, however, Barletta praised Trump's action against Syria.

"I fully support @POTUS' decisive action to show the world that our nation won't stand by as a dictator brutally murders innocent civilians," Barletta tweeted.

Burgess signed the letter in 2013 saying  Obama needed congressional approval for a strike.

On Friday, he said Trump made the "correct decision to take decisive action" — despite not having congressional approval for the attack.

Burgess, added, however, the Congress should have a say in Trump's plan for Syria moving forward.

Collins is yet another member of Congress who signed onto the 2013 letter.

On Friday morning, Collins issued a statement praising Trump, saying he looks forward to working with him to craft a strategy — without any qualms that Trump had not worked out his long-term strategy before the strike.

"We need a decisive strategy for restoring justice and human rights in Syria, and we in Congress look forward to working with the president to develop that plan," Collins said in a statement.

On Friday morning, Fleischmann praised Trump's decision to strike Syria, calling Trump's attack "crucial and necessary." In 2013, however, he signed a letter saying Obama's unilateral action would be unconstitutional.

Jenkins signed onto the 2013 letter demanding Obama get congressional approval for an attack on Syria — and went on to vote against giving him approval.

"The United States of America cannot continue to act as the world's police force in areas of the world where our help is not wanted," Jenkins wrote in a statement at the time.

On Thursday, however, Jenkins praised Trump.

"The recent chemical attack by Bashar al-Assad was heinous," Jenkins said in a statement. "I applaud President Trump's decisive action to show that America will no longer stand on the sideline as innocent men, women, and babies are brutally killed in Syria."

McCaul is another signatory of the 2013 letter. But he mentioned nothing about Trump needing approval for his Thursday attack — he instead praised Trump's actions.

"Passiveness in Syria is what has exacerbated this situation and allowed for adversaries such as Russia and Iran to exert their influence at the expense of U.S. national security, all the while allowing ISIS to flourish," McCaul said in a statement Friday.

In 2013, when Gardner was a member of the House, he signed onto the letter that said Obama needed congressional approval for a strike.

"If the allegations that the regime in Syria used chemical weapons are proved true, then this violation of human rights must be taken very seriously," Gardner said in 2013, according to KDVR. "President Obama must not act unilaterally, Congress must approve any military action. If this means Congress return to session immediately, then so be it."

On Thursday night, Gardner's statement made no mention of Trump needing to get approval before his military action, instead calling Trump's strike "long-overdue."

In 2013, Rokita signed the letter saying Obama needed congressional approval for a Syrian strike. On Friday morning, he called Trump's decision to act without approval "right," and "the leadership that the world needs."

Ross is yet another 2013 signee who said Obama needed congressional approval for a strike on Syria. On Thursday night, he said he supported Trump's decision that did not get a congressional go-ahead.