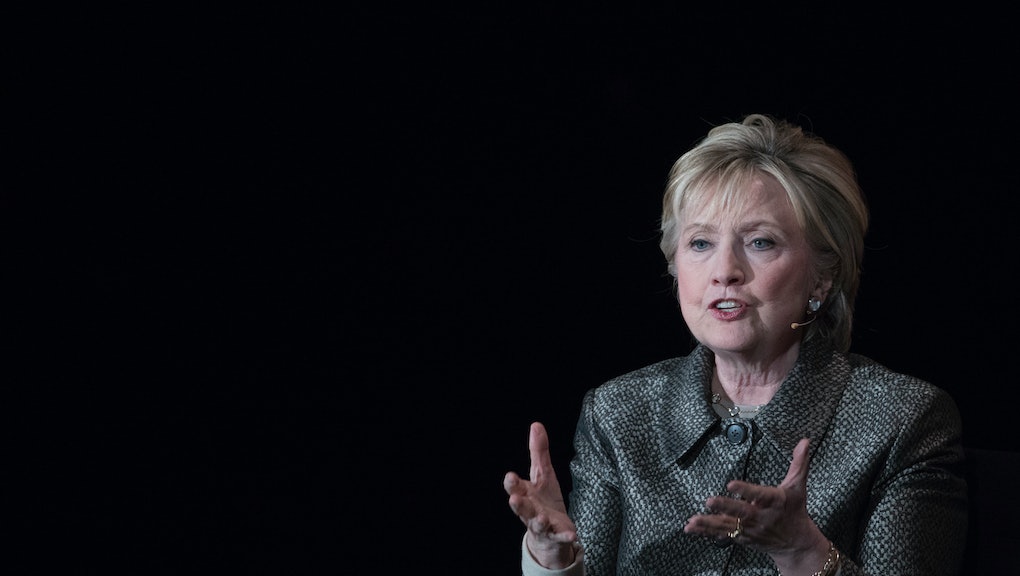 Hillary Clinton's new book will tackle misogyny in the 2016 election

Throughout the 2016 presidential election, Hillary Clinton faced all of the familiar trappings of misogyny.

A Fox News anchor accused her of yelling during her Democratic National Convention speech, advising she speak "more softly" as opposed to what they perceived to be "a sharp, lecturing tone."

Months later, former Republican National Committee chair Reince Priebus criticized Clinton for not smiling enough. And, of course, there's nothing quite like your opponent interrupting you 28 times during a debate.

Clinton could probably regale us with hundreds of incidents like these — and she's decided to put them into a new book.

According to the Huffington Post, Clinton told the crowd at Thursday's Women in the World Summit that she'll "spend a lot of time wrestling" with how sexism may have impacted the election for a memoir due out in September.

"As you might guess, I've thought about it more than once," she said. "I don't know that there is one answer. It is fair to say that certainly misogyny played a role. That just has to be admitted."

Clinton noted there were certainly other forces at work that led to Donald Trump's victory, alluding to his anti-establishment platform and many Americans' desire for a shake up in the White House.

But these factors too, she maintained, were only further compounded by her being a woman.

"In this election, there was a very real struggle between what is viewed as change that is welcomed and exciting to so many Americans and change which is worrisome and threatening to so many others," Clinton said. "And you layer on the first woman president over all of that change, and some people, women included, had very real problems."

There had been some indications that Americans' sexist attitudes could effect the outcome of the election, including a July study that showed many people's hidden biases about women in leadership roles could hurt Clinton's chances.

Others had speculated that Clinton faced different expectations for honesty because of her gender, hence the constant barrage of critiques that Clinton was "dishonest" or "untrustworthy."

We could spend years analyzing what caused the election to play out the way it did, a fact Clinton was well aware of during her interview at the Women in the World Summit.

When New York Times columnist Nicholas Kristoff asked Clinton who she thought was to blame for her loss, she simply replied:

"How much time do we have?"