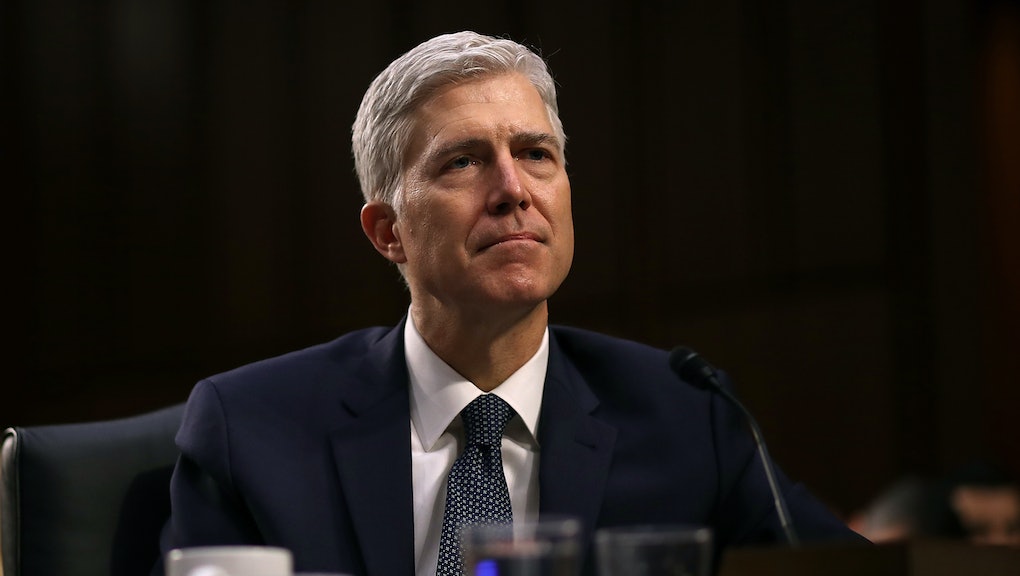 What religion is Neil Gorsuch?

Conservative Christians are celebrating a victory on Friday, as Judge Neil Gorsuch has officially been confirmed to the Supreme Court of the United States.

Evangelical Christians have praised Gorsuch, who ruled in favor of Hobby Lobby as the company fought to preserve their "religious liberties" by declining to cover birth control as part of their employer health insurance.

But what religion does the new Supreme Court judge follow himself? The answer isn't entirely straightforward.

Gorsuch, CNN explained, was raised as a Catholic, though the judge and his family currently attend an Episcopal church.

Gorsuch, CNN noted, could claim himself as either Episcopalian or Catholic if he so chose. Canon law expert William Daniel told CNN that a person enters an "unbreakable theological communion" once baptized Catholic, which would not change if the person worshiped at a different church.

On the other hand, Episcopal priest Rev. Thomas Ferguson told CNN, "If [Gorsuch] intends to be an Episcopalian he could certainly be considered one." The minimum requirements for being an Episcopalian, CNN noted, are being baptized Christian, supporting the church — both through prayer and financially — and receiving Holy Communion at least three times a year.

If Gorsuch considers himself an Episcopalian, CNN noted, he will be the first Protestant judge on the Supreme Court bench since 2010, when Justice John Paul Stevens retired. Five of the current Supreme Court judges are Catholic, while three are Jewish.

Regardless of how he personally identifies, Gorsuch's religion has also come under scrutiny for his choice of church. Gorsuch and his family are currently active at St. John's Episcopal Church in Boulder, Colorado, which, the Denver Post reported, describes itself as a "largely liberal in a largely liberal city."

The church's liberal values include asking members to write Congress in support of action on climate change and delivering a sermon "praising diversity as God's intent," according to the Post. After the shooting at Pulse nightclub in Orlando, the church rang its bells each Wednesday from July 6 to the November election — 49 times — as a way to remember the victims and ask Congress to pass stricter gun restrictions, the Post reported.

Gorsuch's membership at such a church has come under criticism by some, even though, conservative Episcopal priest George Conger told the Washington Post, "There is not really a strong tie between the beliefs of a rector in a social parish and the beliefs of its members."

Despite the church's more progressive values, the congregation praised Gorsuch's nomination to the Supreme Court.

"We know Neil as a man of great humility and integrity, one eager to listen and thoughtful in speaking," the St. John's congregation said in a statement, as quoted by CNN. "These qualities are ones we pray all public servants in any leadership role in our country might possess. ... We give thanks to God for the presence of this family in our midst."