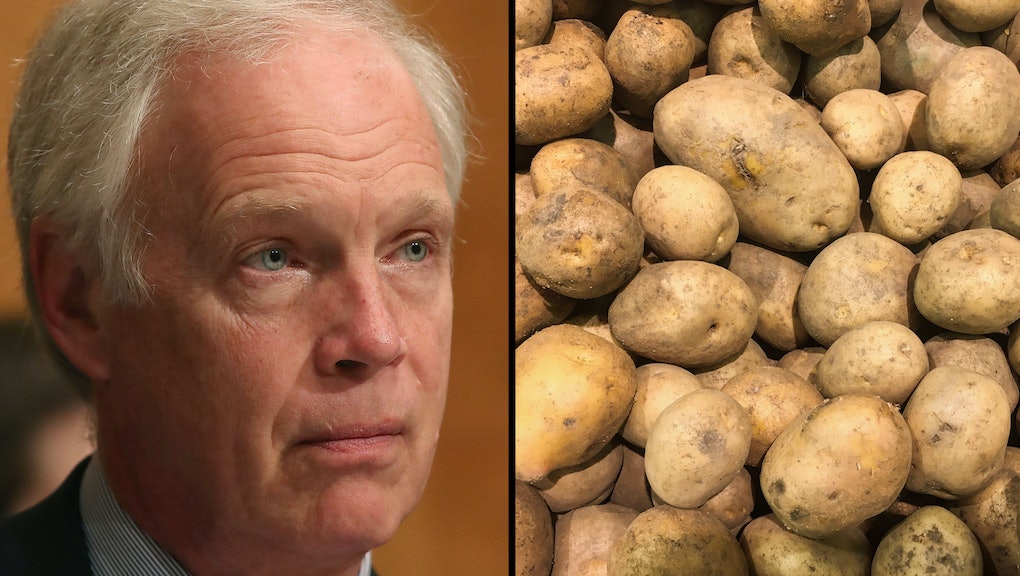 Man sends over 2,000 potatoes to Wisconsin politician who refuses to hold a town hall

What would you do with 2,000 potatoes? Make some French fries? A mammoth batch of buttery mashed potatoes? Homemade potato chips? Perhaps a large cheesy gratin?

Sen. Ron Johnson better start thinking. On Friday, a whopping 1,920 potatoes were en route to the Wisconsin Republican's office to join the ones that had already arrived earlier in the week.

How the hell did we get here?

Max Temkin, creator of the popular game Cards Against Humanity and noted troll, invited people to donate money to send potatoes to Johnson in hopes that the slew of spuds would motivate him to host a town hall. For every $5 donated, Temkin is sending Jonson a potato with a sticker that says "Hold a town hall" and the name of a person who donated.

The potatoes are being shipped from Chicago and they're expected to arrive in Milwaukee by Monday or Tuesday, Fox 6 reported.

"We are allowed to mail thousands of potatoes to his office demanding that he listen to his constituents and hold a town hall meeting,"

Temkin isn't the first to send food in an attempt to get a public official's attention. In February, Julia Silge, a Utah resident, sent a pineapple and ham pizza to her congresswomen to tell her to vote against Betsey DeVos for education secretary.

"We picked potatoes because they're funny and very inconvenient for the senator," Temkin told the Guardian. "If he ignores them, they'll go bad."

The potatoes will be donated to local food pantries, a spokesman for the senator's office told the Guardian, encouraging people to donate to food pantries directly instead of spending $5 on potatoes worth 38 cents.

But Temkin's potato shipment is using spuds to make a point.

"Legally, we're not allowed to call Sen. Johnson a cruel idiot who doesn't understand how health insurance works. But we are allowed to mail thousands of potatoes to his office demanding that he listen to his constituents and hold a town hall meeting," a post on Temkin's website noted.

The ball, er, potato, will be in Johnson's court once the shipments arrive next week.