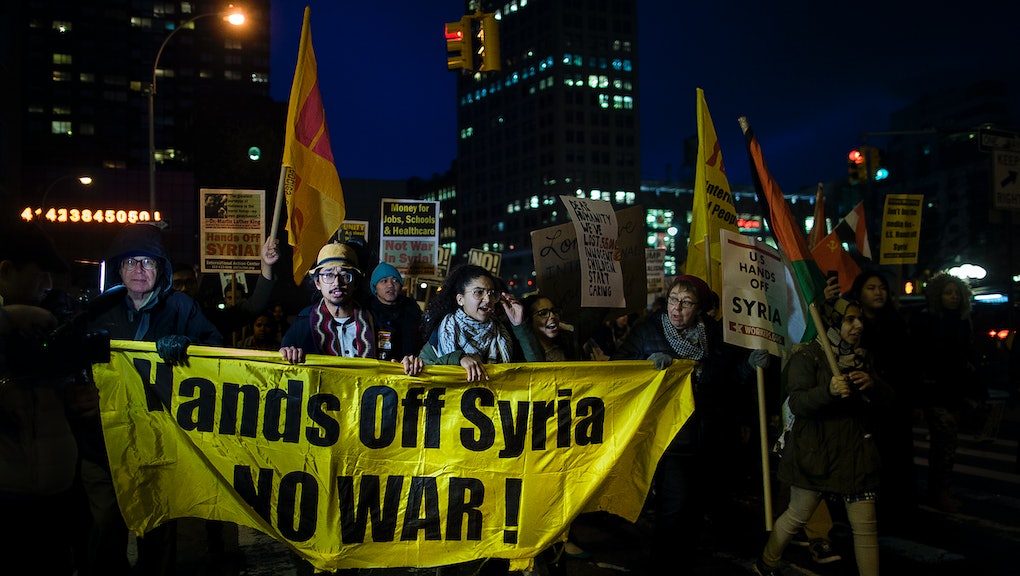 President Donald Trump ordered a unilateral military strike on a Syrian air field allegedly involved in a chemical weapons massacre of civilians this week, potentially putting the U.S. on the verge of launching into another major Middle Eastern conflict.

Major groups in the progressive movement are calling for mass mobilization to oppose Trump's strike. In their corner are left-leaning politicans like Democratic National Committee vice chairman Rep. Keith Ellison and Sen. Kirsten Gillibrand, though they face both Trump and Democratic leadership who supported the strike.

The Sen. Elizabeth Warren-allied Progressive Change Campaign Committee, which is already launching newspaper ads targeting Republicans and some red-state Democrats over Trump's Supreme Court nominee Neil Gorsuch, said any military option in Syria must be preceded by a rollback of the administration's entry ban on all Syrian refugees.

"We cannot forget that the families who were gassed and killed by Assad are the very same families banned from taking refuge in the United States because of Trump," PCCC Senior Legislative Lobbyist Sarah Badawi said in a statement sent to Mic. "Any debate over Syria in Congress must start with accepting refugees who make it through our time-tested and thorough vetting process. It would be hypocritical and morally wrong to bomb the people of Syria who are trapped there because of our government's decisions."

MoveOn.org, which has played a prominent role in organizing hundreds of constituents to hammer Republican candidates at town hall meetings across the country this year, warned Trump could be on the verge of launching the U.S. into another major Middle Eastern war.

"This illegal and unauthorized escalation could have devastating consequences, killing innocent Syrians and costing the lives of U.S. service members," MoveOn.org executive director Ilya Sheyman also said in a statement. "Let's be clear: There's no doubt that Bashar Assad is a brutal dictator who has slaughtered his own people and is complicit in the use of chemical weapons."

"But this is no humanitarian mission," Sheyman added. "These are missiles ordered by a flailing president with plummeting approval ratings, trying to show how 'tough' he can be. The result will likely be increased suffering for the Syrian people."

The Young Turks' Cenk Uygur, who recently launched a group called the Justice Democrats in cooperation with some former campaign staffers for Vermont Sen. Bernie Sanders, criticized "the establishment media's bloodthirsty, pro-war reaction to bombing Syria" on Twitter. Justice Democrats also told Vox they would be moving to run primary challengers against members of their own party who do not condemn Trump's strike.

CREDO Action, a progressive philanthropy group which accumulated hundreds of thousands of signatures on petitions to kick Trump off major TV networks, told Mic in a joint statement with MoveOn, Win Without War and Peace Action that Trump had struck Syria "with no apparent plan for what comes next and with no legal authorization. This is not leadership and it will not make our country safer nor end the tragic human suffering in Syria."

A petition on its web site to have congressional leaders "hold immediate emergency deliberations on Trump's illegal escalation of military engagement in Syria" had reached over 91,000 out of 150,000 signatures as of Sunday afternoon.

Mic's Jack Smith IV and journalist David Klion reported anti-war protests outside the president's New York base of operations, Trump Tower, as well as in Union Square were small.

Progressive groups which oppose the military action are likely to find Trump emboldened by the missile launch, one of the few actions of his young presidency so far with bipartisan appeal.

While some Democrats in Congress have called out Trump for hypocrisy in running on an anti-interventionist platform before launching an attack in the first few months of his presidency, the party's congressional leadership including Senate Minorty Leader Chuck Schumer and House Minority Leader Nancy Pelosi have supported the strike itself.