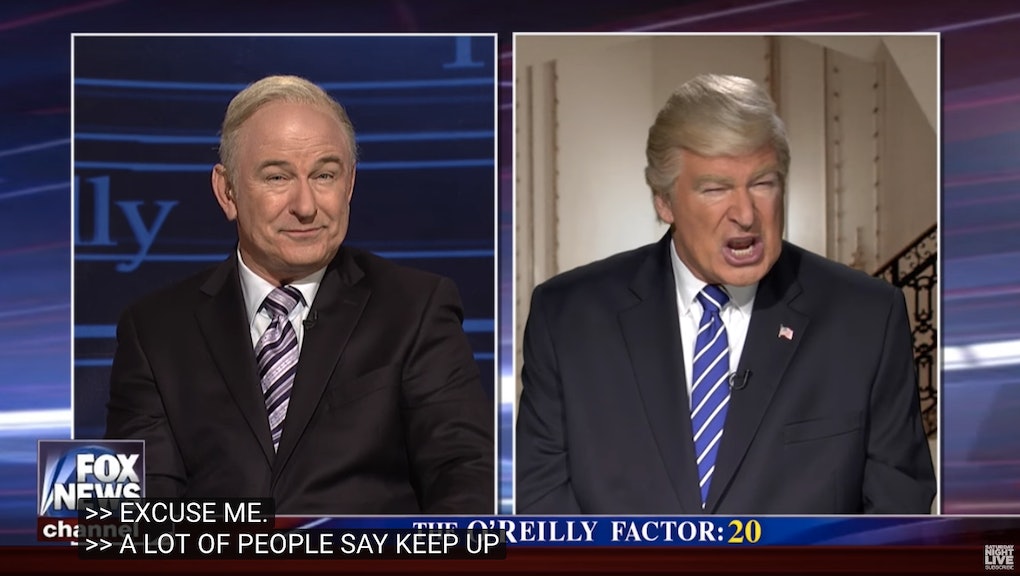 On SNL's imagining of the "no-spin zone," sponsored exclusively by dog cocaine, horse Cialis and the movie Chips — a nod to the dozens of real-life advertisers that severed ties with its host — Baldwin's O'Reilly first offends a female host before addressing the elephant in the room.

"Apparently several women have come forward and accused me of offering them exciting opportunities here at Fox News," Baldwin-as-O'Reilly says, referencing the recent New York Times report that Fox News and its No. 1 host have together paid out over $13 million to quiet allegations of sexual harassment and verbal abuse female employees have filed against O'Reilly.

"Beyond that, the details are a bit fuzzy, but one man was brave enough to come to my defense, a man who is unimpeachable on all female issues," he continued.

That "unimpeachable" man is Baldwin's Trump, live from Mar-a-Lago.

Our real-life president defended O'Reilly this week, saying O'Reilly is a "good person" who hadn't done "anything wrong." Trump is, of course, no stranger to allegations of sexual misconduct — at least a dozen women have made similar claims against him.

"I actually see a lot of myself in you, Bill," Baldwin's Trump says. He explains that, while he is not "familiar" with the actual facts of O'Reilly's case, he has a "loose hunch" that O'Reilly is innocent. O'Reilly thanks Trump for his support, especially during Sexual Assault Awareness Month.

"That's right, Bill. It's a subject that's near and dear to my hand," Baldwin-as-Trump says, drawing light boos from the crowd.

Baldwin's Trump impression quickly became an SNL staple during the 2016 presidential election. The actor has said he won't play the president forever, because he doesn't know "how much more people can take" of an impersonation that so closely approximates Trump's actual behavior.