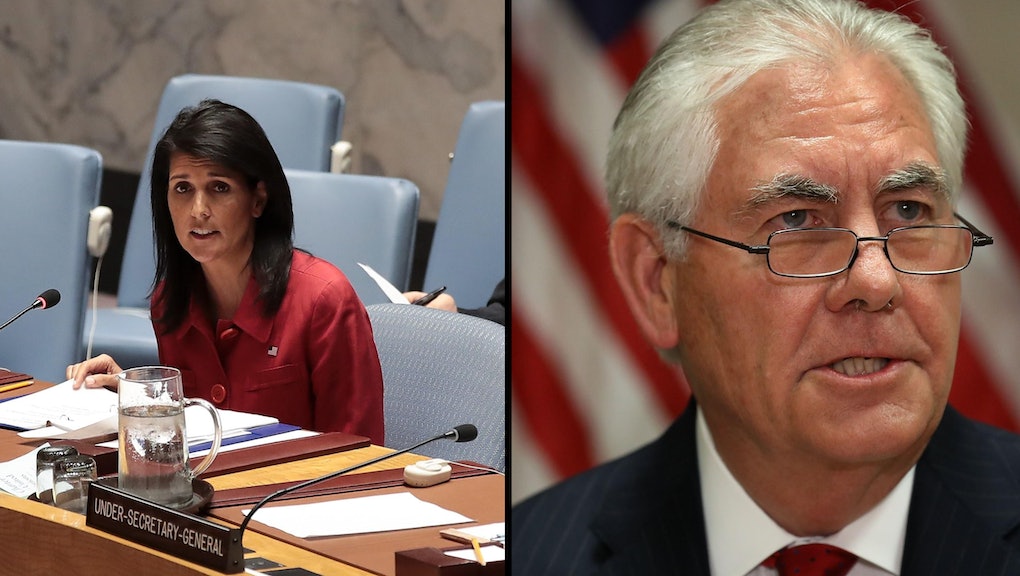 President Donald Trump's administration launched a missile strike on Syrian President Bashar Assad on Thursday, striking an airfield allegedly involved in a chemical weapons attack on Syrian civilians. But the White House is sending mixed messages about whether its view on Assad's future in Syria has changed.

According to Secretary of State Rex Tillerson, the strike has changed nothing about whether the United States seeks to unilaterally oust Assad by force. In an interview with ABC News' George Stephanopoulos on This Week, Tillerson suggested Assad will instead have to be removed by political means, cautioning that force was not a tenable option in Syria.

"You know, we've seen what that looks like, when you undertake a violent regime change in Libya," Tillerson told Stephanopoulos. "And the situation in Libya continues to be very chaotic. And I would argue that the life of the Libyan people is not all that well off today. So I think we have to learn the lessons of the past and learn the lessons of what went wrong in Libya when you choose that pathway of regime change."

But he noted the White House may "ultimately" resort to military pressure to end Assad's reign.

Earlier Sunday morning, Nikki Haley — the U.S. ambassador to the United Nations — told CNN's State of the Union that "getting Assad out" of power was a "priority." However, she did not say force should be used toward this end, instead describing a "political solution" that removes the strongman.

"There's not any sort of option where a political solution is going to happen with Assad at the head of the regime," Haley said. "If you look at his actions, if you look at the situation, it's going to be hard to see a government that's peaceful and stable with Assad."

Asked on Saturday whether regime change was the Trump administration's official policy, Haley responded, "Regime change is something that we think is going to happen."

That sounds a lot like former President Barack Obama's policy on Syria, the limited missile strike against a Syrian airfield notwithstanding.

Obama called for Assad to step down in 2011. By late 2012, he said he was "confident that Assad's days are numbered." Regime change, in other words, was something Obama intended on pursuing during his second term in office.

But Obama was never willing to back up those statements with force. Even when he nearly bombed Syria in response to a horrific chemical weapons attack in 2013 — which Trump opposed — those limited strikes were never going to be aimed at unseating Assad by force. Instead, Obama pursued diplomacy toward a "political solution" to Syria's civil war — a frustratingly fruitless strategy that has left Assad in power.

In 2016, Obama claimed he had not intervened in Syria to remove Assad because the U.S. was still embroiled in the Iraq and Afghanistan wars — and the pitfalls made clear by those conflicts were likely to be encountered during a potential effort in Syria, too.

"Any president who was thoughtful, I believe, would recognize that after over a decade of war, with obligations that are still to this day requiring great amounts of resources and attention in Afghanistan, with the experience of Iraq, with the strains that it's placed on our military — any thoughtful president would hesitate about making a renewed commitment in the exact same region of the world with some of the exact same dynamics and the same probability of an unsatisfactory outcome," he told the Atlantic in April.

"There's a playbook in Washington that presidents are supposed to follow," Obama continued. "It's a playbook that comes out of the foreign policy establishment. And the playbook prescribes responses to different events, and these responses tend to be militarized responses. Where America is directly threatened, the playbook works. But the playbook can also be a trap that can lead to bad decisions."

What's more, it's not clear Trump's addition to the Obama policy — the same strikes Obama avoided in response to a chemical attack — will have any great impact on the Syrian civil war. The airfield struck by the missile attack was used by jets over the weekend, and Khan Sheikhoun, the town Assad allegedly attacked with chemical weapons, was again the target of bombing.

"Although these pin-prick or even wider airstrikes will be symbolic of American power — we're going from 'America First' to being an indispensable nation again — but it may not actually have a material impact on Syria," Vali Nasr, former Obama administration official and dean of Johns Hopkins University's School of Advanced International Studies, said Sunday on CNN.