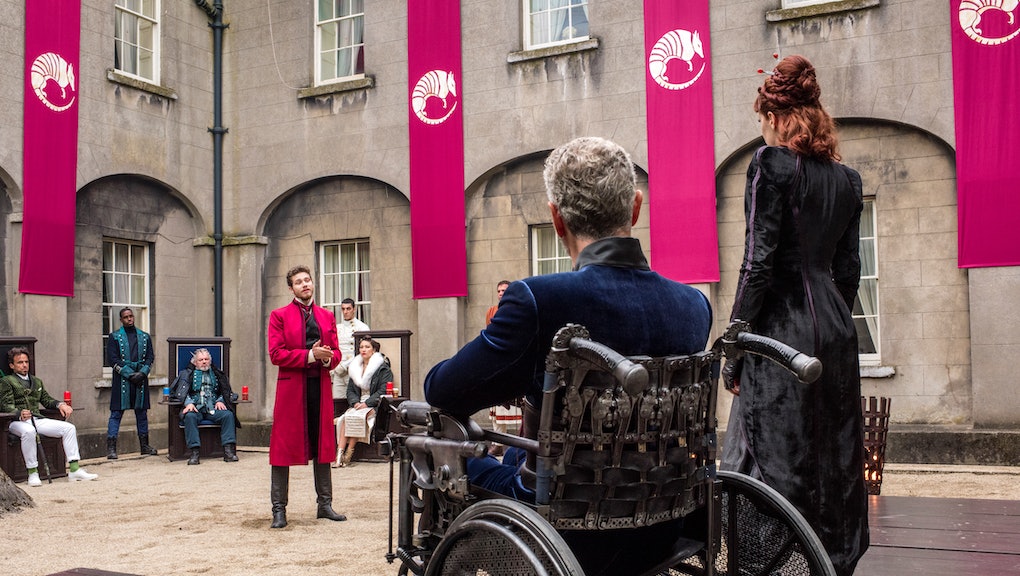 In Mic's TV club, senior arts writer Kevin O'Keeffe and arts writer Miles Surrey will watch an episode of a TV show with no regard to how familiar they are with it. After it airs, they dissect it in a conversation with another Mic staffer. This week's show: AMC's Into the Badlands, with guest Brent McCluskey.

Kevin O'Keeffe (KO): Ordinarily here at Mic TV Club, we watch an episode of a show that at least one of us has some familiarity with. But this week, we watched AMC's Into the Badlands, now on episode four of its second season. It's a show none of us have watched before, and it really is something else.

After watching this installment, I'm not sure I could tell you what happened? There are barons, and they seem to have control of different segments of the Badlands. One of them, the Widow, tries to make a power play but gets ousted by the others in a very dramatic vote involving lighting candles. She fights back with the help of her assassin daughter and an elderly man (her father?) in a wheelchair.

It was pretty batshit, but by the time we got to that centerpiece fight, I was pretty entranced. I don't know how well this works as a show — I'm not sure I could, considering I plainly didn't understand what was happening — but the fight choreography was something really special. Brent, Miles, what did you think of our trip to The Badlands?

Miles Surrey (MS): I'm in love with Into the Badlands, which I basically suggested on a whim after finding a nearly half-hour compilation of action scenes from the show's first season on YouTube. The best part? It wasn't a fan-made video — it was from AMC! They know that's what people want here.

And yes, that's probably the best part of the episode we just watched, in part because I have no idea what was going on. It appears the Widow was sort of trying to broker peace with the other Barons, but on her own terms. However, once things went awry, she was more than happy to start slicing people up.

But my God, we need to talk about the elderly man in a wheelchair, none other than Stephen Lang, who people may recognize from Don't Breathe and Avatar. He killed so many people while sitting in his wheelchair, it's easily the most impressive part of that episode. That, and the guy who shouted "Chaos!" when a soldier asked what was for dinner.

Brent McCluskey (BM): Yeah. Jumping into episode four of the second season blind was interesting to say the least. But after seeing some of the recent trailers and a compilation of fight scenes from the show AMC had thrown together, I knew it was something I wanted to check out, and I wasn't disappointed.

The opening scene of Quinn delivering his rousing speech to his bloodthirsty minions reminded me of Morpheus delivering his speech to Zion. I don't know, maybe it was the fact that Into the Badlands seems to color-code their factions — red denoting whatever warrior group Quinn is leading — like The Matrix painted everything with a green hue.

What's good about the show: I was immediately drawn to the costumes. There were a lot of pretty cheesy lines sprinkled throughout the episode, but also some good ones — with one from Waldo feeling particularly poignant. "You think of compromise as weakness. It's not. It's survival," he told the Widow, who wanted to continue harboring Cogs on her land, whatever that means. But the line was actually thought-provoking and left me thinking after the episode ended.

And to add to what Miles said about Waldo: Yes, he is indeed completely badass. Not only does he have a well of woke wisdom, he can more than hold his own in battle. I never knew a simple chain could be so deadly, or that it could cause so much blood for that matter.

KO: Brent got a lot more from this show than we did! Totally agreed on the costumes, especially those of the female Barons (who were flawless, their fight was flawless, I would watch a spinoff of just them). But I enjoyed the cheesiness of it all, to be honest — like the old martial arts movies that had a similarly corny vibe.

That said, I kind of can't get what this show wants to be. Does it aim for that cheesiness, or just walk into it by accident? Does it want to be Game of Thrones? It feels like it wants to be Game of Thrones, which is a lofty goal. I admire a lot about it, and think the fight scene, plus the "Chaos!" moment Miles mentioned, were close to brilliant in their own, lowbrow way. (And anyone who's read my appreciation of Vanderpump Rules knows I love lowbrow.) But I think, were AMC going to try to sell this to me as a prestige series, I would ask for a refund.

Miles, as Mic's resident Game of Thrones expert, does this make the grade?

MS: I do think Into the Badlands might be the strongest Game of Thrones comparison that airs on the network. People tend to compare The Walking Dead and Game of Thrones a lot, but those comparisons begin and end with their respective popularity and high body count. Into the Badlands is clearly interested in world-building — like Thrones does so well — but I don't think it's trying to be prestige TV. If it is, they're doing a terrible job.

From what I can tell (especially considering the aforementioned AMC fight compilation) the draw of this show begins and ends with the fight scenes. What we saw with all the Barons fighting one another, there's probably one guaranteed set piece like that per episode to draw viewers in. That's not a bad thing — it's immensely fun, but I doubt even AMC would look at it any deeper than that.

BM: What did you guys think of that final hedge chase scene with Quinn and his treacherous son? Was it me, or was it totally reminiscent of The Shining? The Shining with a hint of The Young Pope. I kept waiting for a kangaroo to pop around the corner.

MS: Please, Brent, you know not to say "The Young Pope" in my presence. I will go on a frenzied rant — or more fittingly, a homily. But yes, I did enjoy the hedge scene and I can understand your fascination with Quinn. In the guise of the show, I think he's supposed to be seen as an antihero, but I can't quite tell. And considering how little I know about Into the Badlands, I'd say that's a compliment.

KO: I wish the hedge chase had been the big set piece of its own episode. I felt it couldn't quite hold up to the fight scene we just saw, which was pretty spectacular.

BM: Sure. That hedge garden scene, or at least the essence of the conflict between Quinn and his son could have easily been a standalone episode. Again, I've only seen episode four, but that father-son reunion/murder felt a little rushed.

KO: Miles mentioned body count earlier, and I wanna loop back to that. How many people died in this episode? How major was that guy in red who seemingly got killed at the end? Was that a major character death? I couldn't believe how much bloodshed was happening in what is seemingly a random episode — including that captive mother killing her guard. (That part of the episode was a bit quieter, but still ended on a wild note.)

MS: Yeah, I might've spoken too soon! There were a lot of literal Red Shirts, though I wonder if the scope of the Baron free-for-all meant a higher body count than usual.

KO: Would you guys go back Into the Badlands? I think I'd rather keep up with the show by watching clips of its fight scenes than anything else. The story seems pretty shallow, not to mention tremendously difficult to follow. I'm not even sure watching the whole series so far would make the plot more sensical to me.

MS: I do think I'd probably stick to clips. AMC does release a clip or two of the show once a week (usually, the big fight scene) and that's usually been enough to hold me over. But really, I do want to commend Into the Badlands for clearly putting in a lot of effort into its sprawling fight scenes.

I've seen a few publications cite the series as a perfect remedy for anyone feeling let down by Iron Fist, and from what I've seen here on TV Club, that definitely rings true.

BM: This kind of stuff is right up my alley, so yeah, I'll probably catch up on the show after having watched this episode. There's a lot I liked about what I saw, specifically the apparent conflict of different paradigms from the various factions — that can make for thought-provoking clashes. And if there's more bits of sage advice from Waldo, I'm definitely in.

MS: I think I'm going to have chaos for dinner.

Into the Badlands airs at 10 p.m. Eastern on Sundays on AMC. Mic TV Club is an ongoing series. Follow all Mic TV Club coverage at our main hub.