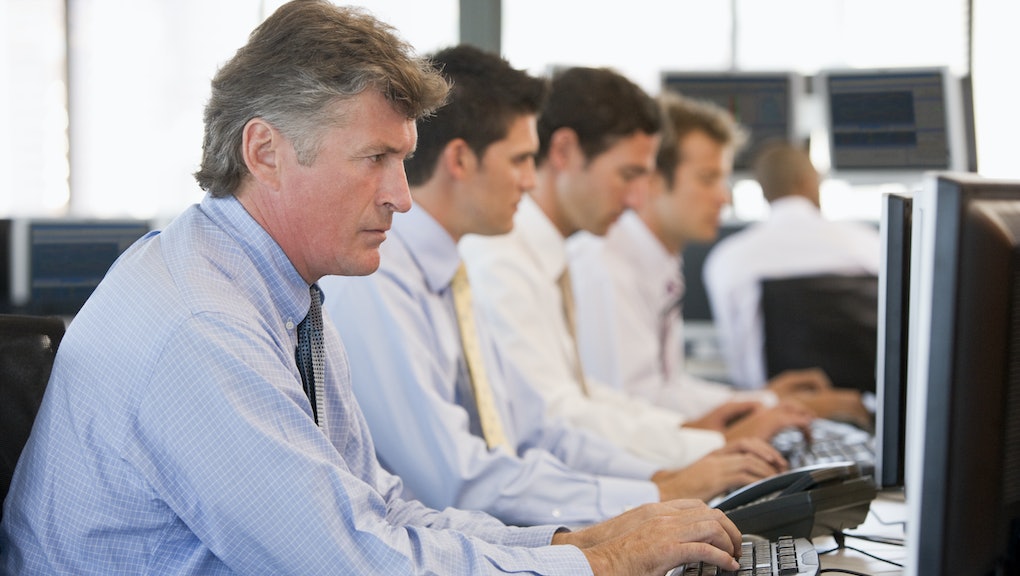 Wall Street is certainly not alone in letting gender discrimination creep into its work culture, but the industry has a particularly fratty reputation as an unwelcoming place for women — despite efforts to promote gender equality.

Sexism isn't simply an issue of bad PR: It's also bad for business. Studies have long shown that across industries, companies that are more diverse — including those with more equal proportions of men and women in leadership roles — do better than ones that are more homogeneous. When people are more likely to encounter outside perspectives, they're more likely to deliberate their ideas carefully. This leads to better decision-making.

Observers have even wondered whether lack of gender diversity might have been a contributing factor in the 2008 financial crisis. Though later research suggests the explanation might be more complicated, there's certainly evidence we pay a bigger price for workplace sexism than we realize.

From loan applications to stock market ratings, bias can create unwarranted costs that are passed on to the public. Here's how.

Stock analysts have an important role in the financial system: They provide what's hoped to be objective analysis of companies with shares owned by everyone from pro investors to regular folks with 401(k)s.

The problem, a new study found, is their analyses aren't always objective, and male stock analysts are more likely to issue favorable ratings when the CEO looks like them, both in terms of gender and race: Since stock analysts are 80% men, the authors of the paper estimate that there's roughly a 3 percentage point bias in favor of companies with male CEOs.

The ratings that get issued by stock market analysts shape how the whole market works, and this phenomenon may result in undervaluing of female-led or person-of-color-led companies and overvaluing of white- or male-led ones, creating costly inefficiency.

2. Men are more likely to give other men bad loans

A new paper from researchers at Harvard, MIT and the University of Southern California actually found that men are more likely to issue bad loans.

Specifically, men seem more likely to issue bad loans to other men after a bit of male bonding: Researchers found that loans issued by men with applications using "soft language" — more casual information about friends, hobbies or education — actually had worse outcomes (including more defaults) after two years than those that didn't, as well as compared to loans issued by women.

In other words, when men chatted, they were more likely to lend or borrow money that would be hard to pay back. As Bloomberg's Suzanne Woolley put it, that suggests "bros shouldn't lend to bros."

3. Men are more likely to commit misconduct (and get away with it)

One possible explanation for why men cause so many more corporate problems compared to women is the fact that they're statistically less likely to be punished for it if they get caught.

But men's mistakes cause disproportionate financial damaging, costing firms about 20% more on average.

In short, while the consequences of workplace bias are complex, the solutions can start simple: Hire more women and people of color so that homogeneity isn't allowed to run quite so rampant as it does today. Better information, a more stable lending system and fairer consequences for corporate misconduct would not just save companies money — we'd all be a little richer for it.