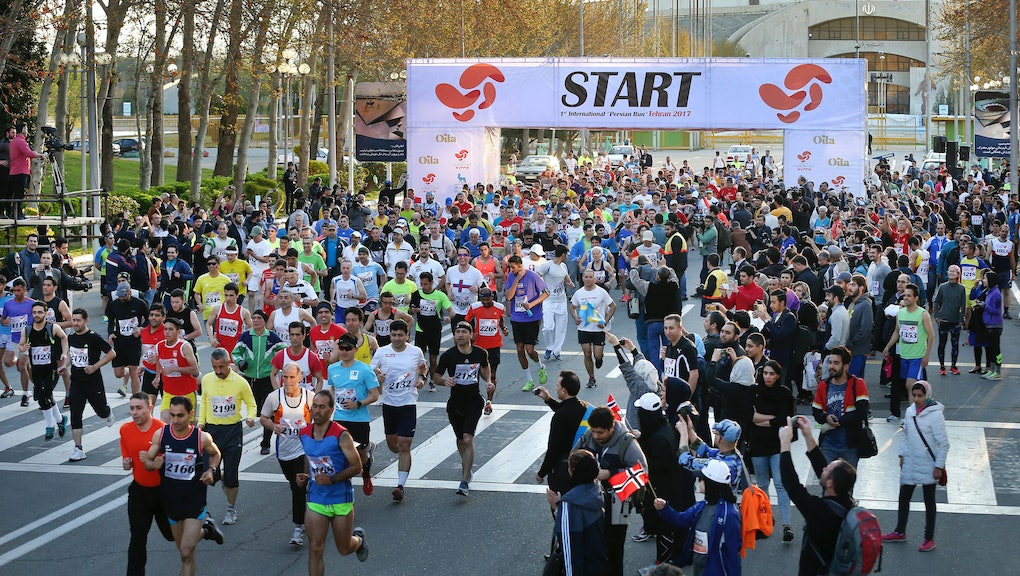 Women in Tehran protest marathon rules, risk arrest and run their own race

After what could only be months of training, a group of female runners checked their emails a few weeks ago to find that they wouldn't be allowed to run in TehRUN, a 26-mile marathon that took place on Friday.

According to the Independent, the marathon's organizers informed the women they were being banned from the race because of a rule that says men and women can't participate in sporting events together. The outlet reported there had been "several confusing updates" on the race's official policy, but in essence, organizers said any woman who wished to still compete in TehRUN would have to run on an indoor track if they wanted to run the full-distance marathon. On race day, however, it emerged that women could take part in the 10 kilometre run but not the half marathon or full marathon, and those still wishing to complete the full distance would have to use an indoors sports stadium track instead.

Determined to compete on their own terms – the 160 female runners decided to flout the antiquated law and organize their own race, risking arrest to run a "secret" 32K marathon outdoors, through a local park.

Dutch runner Karin Brogtrop told the Independent that despite the experience being "stressful" she had a "lovely" time running their alternative marathon.

"It was a women's park but it was family day, so there were men there too," she said. "People kept offering us tea or running alongside us. We had fun. I was happy with it."

Manal Al Rostom, a professional runner from Egypt, said she enjoyed herself too despite being upset by arriving at the marathon only to be told she would have to settle for the shorter women-only race or run inside.

I was arguing and arguing with the registration guy because I came all the way from Dubai for a marathon, not a 10K," she told the outlet.

Rostrom said she was happy she and her fellow female runners had stood up for themselves — and she's looking forward to running alongside men in next year's marathon.

"I just feel that when women speak up for themselves that's when real change comes around," she said. "As a Middle Eastern woman to see women being empowered in this way and see women run in the streets for the first time means a lot to me, of course."

She added, "It lets [women] know there are no limits and they can do anything they want."