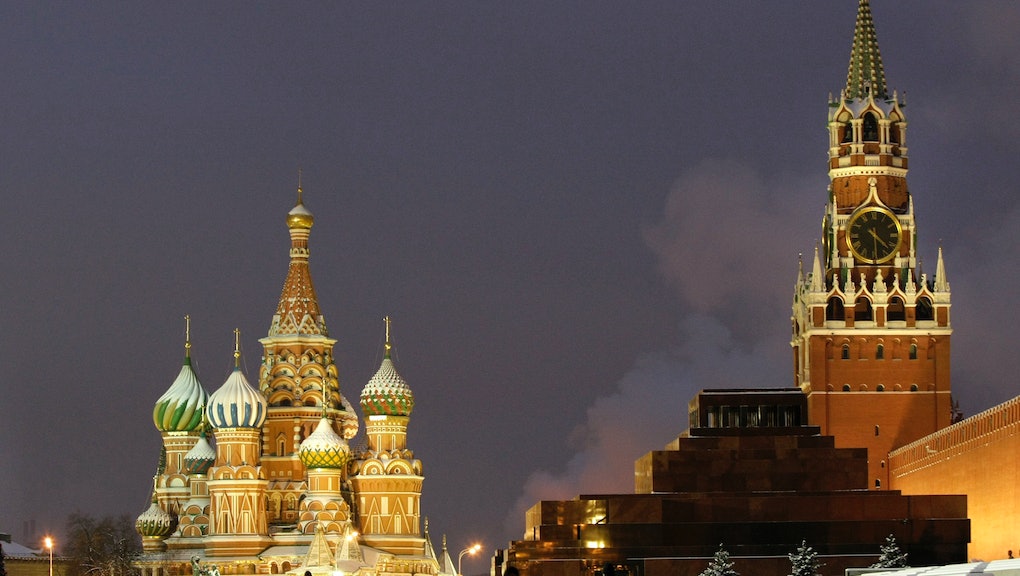 What was the Cold War? How today's Russia-US relations look a lot like the 1960s

Between Trump's recent military strike on Syria and the continued investigations into the president's Russian ties, the relationship between the U.S. and Russia is currently a fraught one — to say the least.

But that's nothing new. For years, the two countries were engaged in the Cold War, a decades-long conflict that involved blacklisting, military intervention, covert operations and the threat of nuclear war.

Though the U.S. and U.S.S.R. were on the same side of World War II, the relationship between the two nations began to decline soon after the war's end. In the late 1940s, the U.S. responded to the Soviet Union and its communist regime by adopting a "containment" policy, which sought to quell the expansion of communism around the globe.

This policy was first described by foreign service officer George Kennan, who wrote in 1947 that the U.S.'s foreign policy regarding the Soviets "must be that of a long-term, patient but firm and vigilant containment of Russian expansive tendencies." The term "cold war" itself, meanwhile, was first coined by 1984 author George Orwell in his 1945 essay "You and the Atom Bomb."

On the home front, this communist threat would be felt through the actions of Sen. Joseph McCarthy and the House Un-American Activities Committee, which sought to stamp out the threat of Americans who were communist sympathizers. Many Americans — most notably those in Hollywood — would find their careers irrevocably damaged by the "blacklist" and the charges of communism wielded against them.

The U.S. raised the stakes of its anti-communist rhetoric by stoking its nuclear arsenal, with President Harry Truman calling for a four-fold defense spending increase and the creation of a "superbomb," a hydrogen bomb even more powerful than the atomic weapons that had been used in Hiroshima and Nagasaki.

The U.S. and U.S.S.R. became engaged in a nuclear "arms race" that made nuclear war an ever-present threat for Americans in the 1950s and 1960s.

The Cuban Missile Crisis revealed that neither side was prepared to use nuclear weapons given the threat of mutual annihilation, and the nuclear tension was relieved by the signing of the Nuclear Test-Ban Treaty of 1963, which banned above-ground and underwater nuclear testing. Though the treaty, lessened the nuclear threat, it also led both sides to build up their other military and strategic forces for the next 25 years.

The two countries' rivalry even extended to outer space, as the U.S. and U.S.S.R. engaged in the so-called "space race." Though the Soviets would be the first to launch a man into space and return him to Earth, the Americans were the first to land a man to the moon in 1969.

Though the nuclear threat never came to fruition, both the U.S. and the Soviet government would go on to use military force to either fight or defend communism around the globe in third-party nations.

This show of military force should feel all-too-familiar as the U.S. militarily engages Russia through their involvement in Syria — a connection, Vox notes, that goes back to the Cold War itself.

A more direct parallel between today's Russian relationship and the Cold War can be traced through its spies. From World War II through the end of the Cold War in the 1980s, both the Americans and Soviets used espionage and counterintelligence to learn more about their rivals.

The Cold War finally came to an end in the late 1980s, after new Russian leader Mikhail Gorbachev took steps to weaken the Soviet's communist regime and President Ronald Reagan declared, "Mr. Gorbachev, tear down this wall." The Berlin Wall fell in 1989.

The espionage, however, still remains. NPR reported there are still Russian agents inside the U.S., and the U.S. continues to monitor Russian communications.

These espionage activities have been revealed through such cases as Evgeny Buryakov, a Russian banker in New York City who pleaded guilty in March 2016 to "conspiring to act in the United States as an agent of the Russian Federation."

As the current federal investigations are now trying to determine, these covert acts could have close ties to the Trump administration. Several former and current members of the administration, such as former campaign manager Paul Manafort, have alleged ties to Russia. Russian ambassador Sergey Kislyak, whom Attorney General Jeff Sessions met with and later denied meeting, is suspected by some to be a Russian spy.

A New York Times article points out several parallels between the Cold War espionage and the current Trump investigation, noting that, as with Cold War-era counterintelligence investigations, it may ultimately take a Russian defector for the U.S. to finally get the truth.

One thing is clear, though — for the Russians, their Cold War-era efforts haven't let up since the Berlin Wall fell.

"For [the Russians], the United States was the opponent, the adversary," Fiona Hill, a former Russia expert for the National Intelligence Council, told NPR. "The main adversary ... And it's the worthy adversary as well."