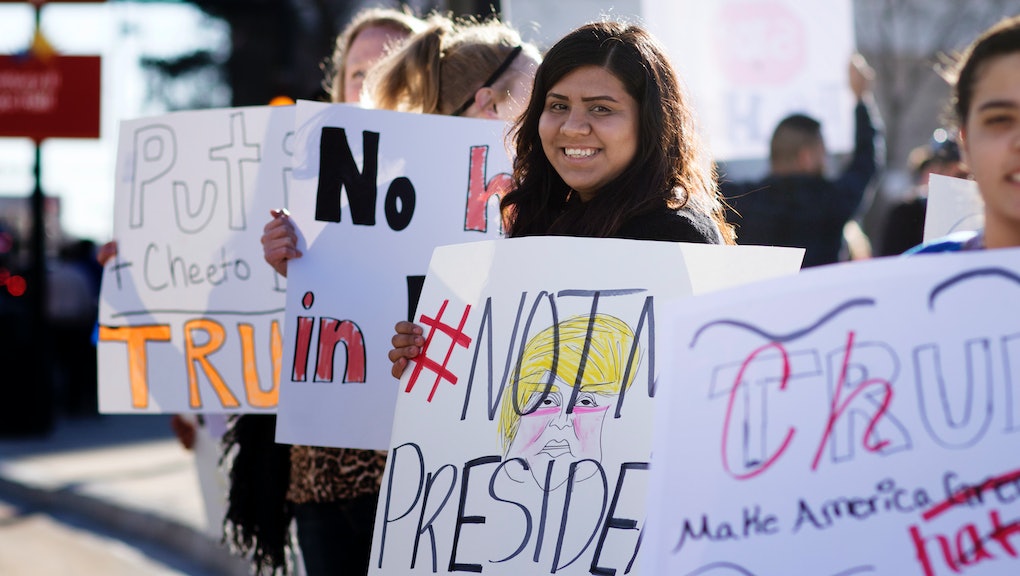 Tuesday marks the first congressional election since November and Republicans are concerned. The race to win the Kansas's 4th congressional district once held by CIA director Mike Pompeo should, by all accounts, be a lock for the GOP. Trump won the conservative district by 27 points, and it's home to the infamous Koch brothers' corporate goliath, Koch Industries.

But over the past few weeks there have been several positive signs for Democrats in the district hoping to send a message to the Trump administration. The Democratic candidate James Thompson significantly out-raised his Republican opponent Ron Estes in individual contributions, and trails Estes by only a small margin in overall contributions from individuals and political groups. In addition, there has been a surge in Democratic early voter turnout compared with previous elections.

And national Republicans have started to show signs that they are concerned. This week Texas Sen. Ted Cruz is scheduled to head to Kansas to start stumping for Estes, and Vice President Mike Pence is reportedly recording a robocalls encouraging voters to back the Republican.

At the same time the National Republican Congressional Committee has dropped $92,000 into the deep-red district with a full $67,111 spent on TV advertising, according to the Wichita Eagle. That's in stark contrast to the money that the Democratic Congressional Campaign Committee who has not not invested in the race.

Given the amount of enthusiasm behind Thompson and the insecurity Republicans seem to have about a district in which they should feel confident, one might expect that national Democrats would be interested in trying to make the race competitive. Instead, they have largely sat out this election, leaving Thompson to fend for himself against Estes.

The move to stay out of the race is part of a broader pattern with the national party. So far the DCCC, which raises money to get Democrats elected to the House, has only made a major investment in one of the four upcoming special elections to replace Trump cabinet members — the race to replace Health and Human Services Secretary Tom Price in Georgia's 6th congressional district.

Another upcoming special election in Montana's at-large congressional district, which will replace Interior Secretary Ryan Zinke, has also gone largely unnoticed. When Rep. Jim Clyburn (D-S.C.), the DCCC national mobilization chair in the 2016 general election, was asked by the Huffington Post about the Montana race, he admitted that he wasn't even aware such a race was under way.

The current homepage for the DCCC invites supporters to get involved and "make calls" and "talk to Georgia voters" but makes no mention of any of the other special election races, despite the fact that Kansas's race is Tuesday, and Georgia's isn't until April 18. The group did not return Mic's request for comment.

The difference may be a calculation about what the party thinks is and is not a winnable race. In Georgia's 6th district Hillary Clinton lost to Donald Trump by only one percentage point. But the popularity of Trump may not be all that matters.

In Montana, where the at-large congressional district includes voters across the entire state, Republicans recently lost a statewide race to unseat the Democratic governor. The Republican candidate in that race was Greg Gianforte, a conservative software engineer who is now trying his luck again in the special election.

One difference that might be driving the DCCC's different approach might be the nature and style of the candidates themselves. Both Thompson and the Montana Democratic candidate Rob Quist have been described as Bernie Sanders-esque outsider figures. Thompson is a civil rights lawyer with no previous experience in elected politics running on a populist, anti-billionaire agenda who says he was inspired to run by Bernie. Quist is a folksy progressive country music singer and a Sanders supporter.

Georgia's Democratic candidate Jon Ossoff is also a progressive but with a more conventional political pedigree. He's a former campaign staffer who once interned for Democratic congressman and civil right legend John Lewis who voted for Hillary Clinton in 2016.

If either Quist or Thompson pull off an upset, it may signal the decline of the Democratic establishment's role in electing candidates, and the rise of grassroots organizing as the future of the party.