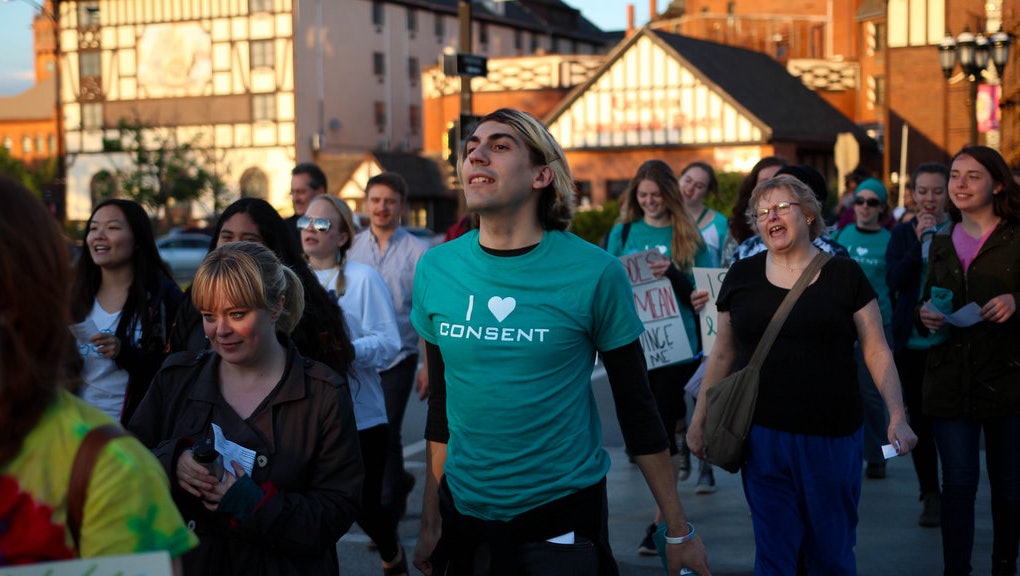 When it comes to sexual assault, we deserve more than awareness

Over 300,000 Americans over the age of 11 will likely be sexually assaulted this year. If we experienced kidnappings at that rate, we wouldn't just raise awareness — we'd be darn sure we were doing something to stop the epidemic.

And yet it’s Sexual Assault Awareness Month once again. It's a grim annual ritual featuring a lot of posters and press releases with the goal of raising awareness. A proclamation was even made by President Donald Trump — the same guy who brags about grabbing women by the "pussy" and who is currently being sued by a woman who claimed he assaulted her, one of at least a dozen women who have made similar claims, including his first wife, Ivana.

That Trump had no problem blithely calling for more awareness of sexual assault should tell us all we need to know about how toothless awareness is as an objective. Nearly everyone is aware of sexual assault; most people agree it's bad. It's the moment after awareness that needs our attention.

There are some key unanswered questions in how to end sexual violence: How do we measurably reduce rates of rape in our communities? Which victims get believed, and under what circumstances? Do women of color have access to justice and healing when they're raped? How about sex workers? Women who never went to college? Trans women? Men? What can we do about judges and cops who shield perpetrators at the expense of their current and future victims? What would real accountability look like for rapists? In comparison to these questions, awareness feels decidedly basic.

That's not to say awareness is completely useless. It can be an important first step leveraged for other, more concrete ends. When I tell my story, I don't do it in the hopes of simply convincing people not to rape. Sharing my story with other survivors helps them find their own voice so they can tell their story, heal and seek justice.

None of the progress that's been made so far in addressing rape — not the outlawing of marital rape; not the passing and renewing of the Violence Against Women Act; not restoring to Native American tribes the right to adjudicate non-tribal rapists who rape on tribal land; not the tremendous campus activism of the past five years; not the Obama White House initiatives that resulted from that activism — could have been done without the creation of mass political will in support of change. That political will is ginned up in part by targeted awareness efforts.

But we can't just take the same first step over and over and expect to make real progress. At best, awareness as a standalone goal is a dead end. At worst, it can do actual harm.

One study even found it may make men more inclined to rape. That’s right: Researchers Dianne Berg, Kimberly Lonsway and Louise Fitzgerald determined that not only did college men fail to become more empathetic after hearing from a female rape survivor — they actually reported being more likely to use coercion or alcohol to push past a partner's "no" than were the men who heard from male survivors or the guys who heard from no survivor at all. It's still not clear why that happened. And not only is there no coordinated effort to figure out why, very few people — even people in the anti-rape field — even know about it.

Awareness campaigns also hoover up enormous chunks of funding that could be directed to researching the causes and best solutions for sexual assault. We're still bumbling around in the dark, with very little idea of what actually reduces sexual violence. What approaches are most effective in convincing undetected rapists to stop raping? We have no idea.

Does the adoption of affirmative consent as a community standard make it easier to detect and deter rapists? I sure think so, but I can't back up my hunch with data.

What kind of consequences for rapists are most effective at reducing recidivism? No one can say, because funding for the kind of research that could actually stop rape is in short supply.

It's time for Sexual Assault Anger Month, during which survivors are free to express the full depths of our rage while allies and supporters protect us from backlash. Even better would be Sexual Assault Action Month, which would require — and inspire — participants to take meaningful action toward measurably reducing sexual violence. The last week would be reserved for evaluation of impact and lessons learned.

Or how about Sexual Assault Accountability Month, through which the institutions that continue to benefit from ignoring or downplaying rape — think college campuses, professional sports teams, police departments, the Catholic Church, the Trump White House — would be pressured to pony up major dollars to fund research into best practices for ending the violence from which they’ve been profiting. If we become aware of something related to sexual violence in April, let it be this: Awareness isn't enough.