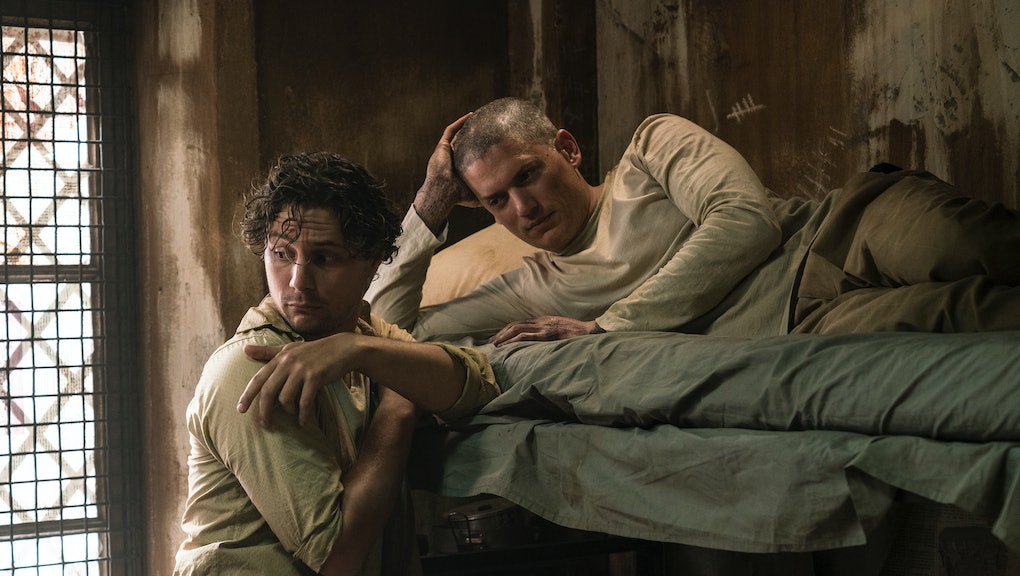 The second episode of Prison Break season five opens on a news reel: ISIL fighters are reportedly closing in on the yet unspecified Yemeni city's borders, and it's revealed that a particularly gruesome terrorist named Abu Ramal is being held in the same prison where Michael now finds himself, Ogygia.

Immediately we can start to see echoes of previous Prison Break plotlines. In order to rescue himself and his fellow "good" prisoners, Michael must compromise himself and his integrity by also rescuing a monster.

This dilemma has played out in many seasons, and has always been in the background to complicate Michael's otherwise martyr status. Is releasing Theodore Bagwell into the world a fair price for society to pay to make amends for his brother's wrongful imprisonment? It's not an easy question, and Ramal, at least superficially and at first glance, seems just as bad.

After this helpful piece of context, the action cuts immediately to Michael and his fellow prisoners who are already attempting to escape. Needless to say, it doesn't go well. The "signal" they're supposed to get for the all-clear never comes.

Later we learn that Michael's escape plan hinges on a blackout to be arranged by the Yemeni municipal official who has access to the power grids. The official's son, we later learn, is one of Michael's more sympathetic prison-mates who is doing a 20-year sentence for homosexuality (homosexuality, though illegal in Yemen, isn't punished nearly so harshly, but whatever.)

To arrange the blackout, Michael — or one of the show's mysterious string-pullers, it's not really clear — successfully passes a message to Lincoln and C-Note, asking them to track down this so-called "Sheik of Light." We later find out missed the Shiek missed the first signal because ISIL fighters had kidnapped his daughter, having seized the suburbs.

Back in the U.S., Sara receives a video message from Lincoln showing footage of their conversation (or non-conversation) with Michael, which inspires her to make an inquiry with the State Department (big mistake). Upon arriving, Sara is confronted by Paul Kellerman, the once-corrupt Secret Service agent who found redemption in season four's final moments.

Kellerman introduces a bit of a mind-bender. "You're married to a man who never existed," Kellerman says, before pulling up footage of a man that looks like Michael murdering a CIA operative. The man in the footage, Kaniel Outis (the episode's title) is wanted for murder and for colluding with none other than Abu Ramal and his fellow ISIL-terrorists. Essentially, Michael Scofield is being erased from existence to serve some sort of conspiracy.

At the episode's conclusion, Ramal and other prisoners who were languishing in solitary are released for Ramadan, and he and Michael embrace, in essence validating Kellerman's interpretation of the events.

Of course, it's Prison Break and so it's probably more complicated than that. As Sara immediately observes, the hunter's camera footage capturing Michael's alleged murder looks exactly like the footage that was used to implicate Lincoln. Kellerman also hedges, "Only somebody very official could turn someone into someone else," Kellerman says. "Or a genius like Michael."