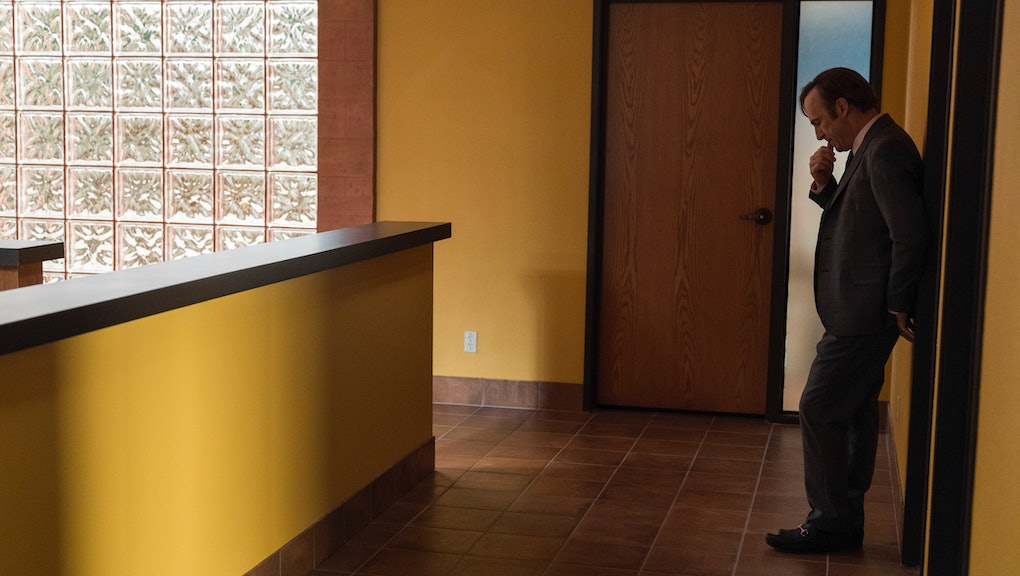 The season three premiere of Better Call Saul, "Mabel," kicks off the way the previous seasons began, with a black and white flash-forward to Jimmy/Saul's fugitive life as Gene, the Cinnabon manager at a strip mall in Omaha, Nebraska. These scenes always provide a fascinating window into Jimmy's post-Breaking Bad life (plus, at least for this viewer, fresh cravings for Cinnabon).

This time around, we see Jimmy going through his meandering work routine, set to Nancy Sinatra's joyful "Sugar Town." However, as Jimmy inconspicuously eats a sandwich during his lunch break, he spots a shoplifter, who hides in a photo booth as the police follow suit. One of the cops asks Jimmy if he's seen anyone run by. Jimmy hesitates, before pointing to the photo booth where the shoplifter is arrested, and Jimmy is thanked for his good samaritan service by the policeman. But just as the cops are dragging the man away, Jimmy blurts out, "Say nothing, you understand? Get a lawyer!"

It's such a telling moment for Jimmy, which perfectly sums up one of his greatest character traits —but also, a tragic flaw. It's that willingness to stick to his guns; to be that shady lawyer that the criminal underbelly of Albuquerque, New Mexico, turns to in a pinch. Jimmy's story in Better Call Saul is as much about male ego as Walter White's in Breaking Bad, and that scene shows it hasn't left him, even after the harrowing events of Breaking Bad. But Jimmy's also a man of self-preservation, so the thought of the police figuring out he's actually Saul Goodman, wanted fugitive, causes him to collapse at work while he's icing some buns. And that's all we get from this flash-forward.

"Mabel" then returns to where we left off the second season: Jimmy confessing to tampering files in Chuck's Mesa Verde case, which is a felony. Jimmy, of course, doesn't know Chuck is recording him, as we see Chuck hit pause and put away the tape before Jimmy comes storming back into the house. The tension between the McGill brothers dissipates a bit once Jimmy helps Chuck remove the aluminum foil covering his home. While Jimmy's removing the tape — as Chuck condescendingly instructs him to do so; gently so Jimmy doesn't damage the wood underneath — he spots an old childhood book: The Adventures of Mabel.

Better Call Saul co-creators Vince Gilligan and Peter Gould (Gilligan also the creator of Breaking Bad) are not ones to throw a children's book into the series without a deeper meaning. Plus, it's where we get the episode title from. The story's about a little girl who helps the King of Lizards, and her reward for helping him is gaining the ability to talk to animals. Uproxx's Dustin Rowles previously theorized that the book could mean Chuck becomes tempted by the elaborate cons his brother can pull so well. I'm inclined to agree with that. Chuck's new to being a con man, but based on how quickly he's able to pull a confession from Jimmy, he's pretty good at it. He also knows the evidence likely won't hold up in court — as he later tells Howard — and has a different plan in mind for the tape. If this keeps up, he might as well call himself Slippin' Chuck.

Meanwhile, we revisit Mike in the same harrowing situation from season two. Someone's left a conspicuous note on his car with his horn blaring, preventing him from attacking the Salamanca family, and he quickly surveys the area before driving away hurriedly. When he's at a safe distance he does a quick check of his car, and in the distance we see a lighting storm begin to form — ominous! Now unless any Better Call Saul fan has avoided all promotional materials for the third season, Gus Fring is coming to the show, and is responsible for stopping Mike. It puts the series in a bit of a quandary: How to make the Gus reveal exciting for fans who know it's coming. So "Mabel" puts forth one of the show's most thrilling sequences to date, with nary a word of dialogue.

Mike takes his car to a body shop, where he meticulously tears apart every inch of his car to try and find something left behind by whomever (Gus!) stopped him. With an upbeat, almost hypnotic score complementing Mike's actions, it feels like we're watching a low rent, much older — no disrespect, Jonathan Banks — take on Jason Bourne. He disassembles the entire car for hours, finding nothing, and waits for a cab at the shop's reception. However, a final thought lingers as he looks at the gas caps for sale. Sure enough, there's a small tracker that was left inside the gas cap of Mike's car. It's an exhaustive search, but one that underscores both Mike and Gus' characters: they're meticulous as all hell.

At his office, Jimmy gets a surprise visit from an Air Force captain; the one who was tricked into letting Jimmy on an air base in season two (Jimmy shot a commercial there by bringing in a faux war veteran, unbeknownst to them). The captain threatens legal action against Jimmy if he doesn't take the commercial off-air, which leads to a heated exchange where Jimmy chides the man, telling him to stick to flying planes while he sticks to the law.

Before the captain leaves, he tells Jimmy that the wheel eventually turns on people like him, and it'll happen to him eventually — or, in short: karma, dude. Karmic justice might not be on the cards for the Air Force captain, but Jimmy does get his comeuppance — eventually. Why else is he working at a Cinnabon, passing out at the notion of cops talking to him?

With Mike aware of the tracker on his car (there's one in his car at home as well), he removes the cap to meet with Caldera, the shady vet. Caldera gets him something that can, basically, track whomever is putting the tracker onto him once the battery dies out and they have to switch it out with a replacement. It's all rather muddy, but the point is this: It works. Mike spends all day draining the battery by strapping it to a radio, then waits by his front window for men to arrive and switch it out. With the tracker in place, the episode ends with Mike pursuing the mysterious vehicle.

There's almost no chance that Gus is inside of the car, but it's definitely one of his henchman. What's interesting is how Better Call Saul might play out the Gus reveal: Is the man Mike follows going to head straight to Gus, or is there a more intricate path at play? Considering how much effort Mike had to put into finding Gus' tracker, doubtless it'll be complex. Unless Mike stops for some fried chicken.