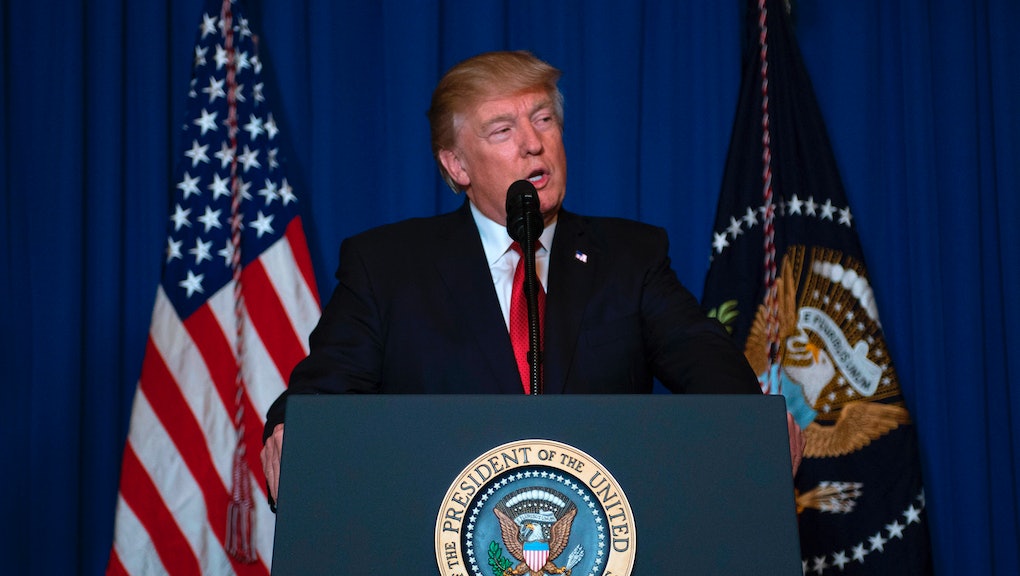 Donald Trump bombed Syria, but has yet to endorse any long-term strategy

President Donald Trump has yet to clarify what, exactly, his administration is planning to do about Syrian President Bashar Assad and his regime's use of chemical weapons on civilians and rebels — even as his own staff is scrambling to justify Thursday's missile strike on a facility allegedly involved in chemical weapons attacks, the New York Times reported.

As the Times noted, Trump's conspicuous public silence on the matter since last week has been mirrored by internal confusion in the White House about what comes next. Mixed messages from the administration have included Secretary of State Rex Tillerson's statement that the U.S. military is not seeking to oust Assad by force, U.N. ambassador Nikki Haley's statement that a "regime change" is a "priority" and press secretary Sean Spicer's suggestion that the United States could launch further strikes in response to other war crimes like the use of barrel bombs — a statement the Times reported the White House quickly walked back.

As both the Times and CNN's Chris Cillizza noted, it looks an awful lot like Trump has not yet settled on a decisive strategy to deal with the Assad regime and Trump's advisers are responding by publicly pushing their own views on the situation.

Pressure on the White House to settle on a course forward is building rapidly, with some of the loudest voices in the Republican Party's hawkish wing, Sens. John McCain and Lindsey Graham, endorsing sweeping military operations in Syria. Key Syrian ally Russia is reportedly furious about the U.S. strike, even as the White House has publicly dithered about whether Russia knew about the chemical attack in advance. Meanwhile, major changes in Trump's national security leadership suggest the administration is sidelining the anti-intervention wing of his party and returning to the hawkish stance of his Republican predecessors.

The only idea consistently pushed by Trump and Tillerson is creating an "interim zone of stability" for refugees to gather, a strategy criticized by Human Rights Watch because it might not amount to "anything at all" given the continual failure of previous cease-fires.

Former President Barack Obama infamously warned Assad of a "red line" if his government continued to gas civilians and then never launched a military strike, instead relying on an agreement with the Russian government to disarm Assad, which was apparently toothless. Before the latest chemical attack, he was adamant a major intervention in Syria could result in the United States becoming bogged down in exactly the kind of disaster it experienced during its wars in Iraq and Afghanistan.

"There's a playbook in Washington that presidents are supposed to follow," Obama told the Atlantic in an article published April 2016. "It's a playbook that comes out of the foreign policy establishment. And the playbook prescribes responses to different events, and these responses tend to be militarized responses. Where America is directly threatened, the playbook works. But the playbook can also be a trap that can lead to bad decisions."

Trump's rapid about-face on Syria, which he previously warned could be the trigger for "World War III," shows he is comfortable with rapidly projecting force.

Now the confusion surrounding the administration's apparent indecision shows Trump might not have been prepared to deal with the consequences of his decision. Not only does that suggest Trump hasn't yet settled on a game plan, it also suggests he might resort to making one up on the fly. The consequences of any potential failure would mainly be felt by Syrian citizens, who have already suffered immensely throughout the six years of the conflict.