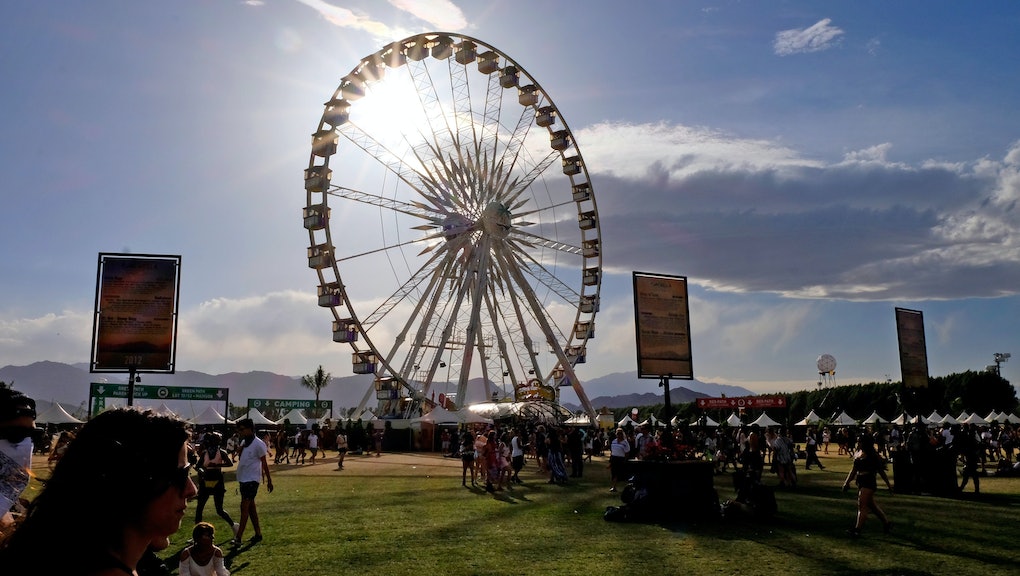 Coachella survival guide: 7 things to keep in mind when planning your festival trip

Neon bandos, dandelion crowns and dad hats as far as the eye can see, the warm scent of stale beer on the breeze, the rumbling blur of a distant drum and bass set — nothing says "spring is here" like the sights, smells and sounds of the Coachella Valley Music and Arts Festival.

Coachella, the festival season's first major outing, kicks off Friday, April 14. A beautiful weekend is expected, which should make packing relatively straightforward for both campers and casual Coachella goers. But there are still preparation pitfalls that the inexperienced festival goer can face in perfect sun. Even the most innocent error can become grave if you're not prepared to deal with the fallout.

Before you leave for Coachella Valley, give a read over the following packing, dress and general activity suggestions to make sure you're set for a safe and fulfilling weekend. Or send to a friend to help them avoid the Coachella comedown.

As an adult who knows how to pack, you know that the best way to make sure you don't forget anything is to make a list. You know what you need to be happy and healthy, but there are a few game-changing essentials that some might forget running out the door on Coachella day. They are:

• Sunscreen: The Coachella tan takes the worst parts of the farmer's tan and the yacht club burn and mixes them together to create the most profoundly unsexy skin coloration around.

• Plastic bags: Handy for just about everything: trash, wrapping up leaky bottles, keeping your bags neat and your snacks safe from poachers. You have a million under your sink. Bring them.

• Bandana: The way bandanas are normally worn in the Coachella uniform (rolled up, and tied around the forehead like a Street Fighter character trying to pass as a Dead Head for the day) isn't really gonna do squat. But they're handy to have to help you cool down. Wet it every time you fill your water bottle and lay it over your searing neck. Use it to shade your face or dab sweat. It's good.

• Hat: You may not be a "hat person," but you have to understand: the sun doesn't care about you, your skin or your eyes. Defy your fashion norms and take a walk on the wild side.

• Ear plugs: You're not lame for wearing ear plugs. Those speakers at Coachella are loud enough to call people in from the parking lots. You're saving yourself from serious ear fatigue, so you can actually enjoy that final headliner, which this year is Kendrick Lamar.

As is the case with all theme parks, concerts and sporting events — food is absurdly expensive at Coachella. You can't bring snacks into the venue, and unless you're extremely clever, security will likely find your granola bars. But you can bring food into the camping area.

For some reason, when people enter the festival environment they magically forget their alcohol and drug tolerance levels. So let us be clear: Nothing about your physiology changes simply because you have all day to get fucked up and nothing urgent to wake up for in the mornings. If anything, you're going to be more susceptible to the effects of alcohol because you'll be out in the sun getting dehydrated all day. No one wants to be that person hugging trees and vomiting at noon.

You can bring alcohol into the camping area, but just be sure it's in plastic bottles. Spring for the lighter color alcohols, as you'll be slightly less likely to wake up with a hangover the next day.

Coachella, Bonnaroo and other major festivals claim their events are drug-free. Even those who have never been know that is not true. Not only are there drugs, but there are fake drugs: bath salts masquerading as molly, crushed up ramen noodles pretending to be DMT, vinegar soaked paper passing as LSD, you get the idea.

These random solicitations usually swing one of two ways. They'll either be a disappointment or dangerous. If you must do something to help you remain engaged and excited to be at Coachella, there are precautions you can take. Drug testing kits, like those offered by the Bunk Police and similar organizations, can be a quick way to tell whether what your friend just bought is actually cocaine and not some random combination of nose numbing powders.

The Bunk Police no longer vend openly at Coachella, but according to a past Reddit AMA, they're working on ways to get their services into festivals to help protect festival goers.

5. Get a watch and plan a relaxed schedule

Nothing kills a battery like a music festival's unpredictable, spotty network problems. An easy way to save a solid amount of battery is to pick up a watch so you can see when you've got head to the next stage.

As for actually scheduling your acts, everyone will inevitably overestimate their energy levels and time management skills. You'll have a better time if you pick fewer acts and take the time to immerse yourself in a full set, rather than lopping off the end of one to catch the start of another. You'll get worse spots in the crowd and spend the majority of time crossing the festivals grounds back and forth, achieving nothing but making yourself more irritable.

6. Plan for down time

Especially for those camping, there will be more down time than you'll realize. You'll need to post up and rest a bit each day, especially in the afternoon when the sun is highest and the highest number of acts are overlapping in the schedule.

Prepare for that to make it a more attractive alternative than desperately pushing yourself to see one more act in the unforgiving sun. Bring a towel or blanket, some cards, a pen and paper — anything to keep you from chain smoking one more cigarette or cracking another beer for no reason other than boredom.

7. Prepare for the Coachella comedown

There's a very unique emotional fallout that many experience following the action-packed, dopamine-surging Coachella weekend — the Coachella comedown. People likely use the term to refer to a lot of aspects of the experience — either the fallout from extended substance abuse, general exhaustion or just a more wistful feeling of paradise lost. It's always the same rude awakening back into the real world filled with people who didn't spend the weekend trading only good vibes, music and drugs.

It can manifest in addictive behaviors, a want to keep the high going, or supreme lethargy, lack of motivation and general intellectual performance issues. You've got to reset. Easing off the partying Sunday night will help, but getting back into your regular sleep, exercise and eating schedule is key.

"Promote healthy sleep, get in a routine, do some physical exercise early in the day, don't drink drinks that stimulate you like caffeine and certainly no other drugs," Tim Williams, a consultant addiction psychiatrist, told Noisey in an interview posted April 11, when asked how to ensure you can get back on that normal sleep schedule without relying on copious amounts of marijuana. "Take TV and computers out of your bedroom."

Do all these things and you just might make it through Coachella weekend without doing serious damage to your ears, body and psyche.