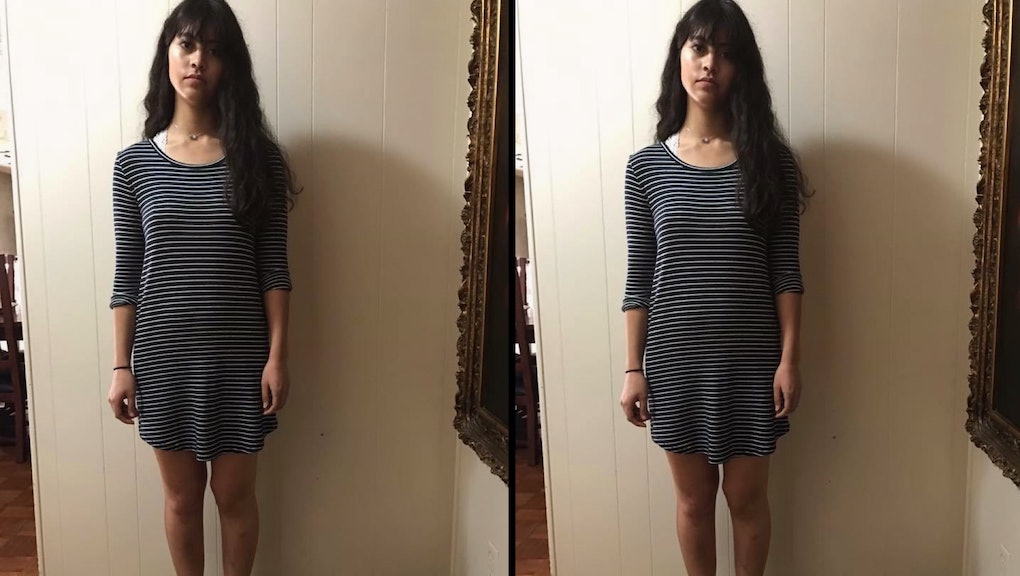 Abuabara's mother, Rosey Abuabara, took to Facebook and Instagram  to write about the situation, first posting a picture of her daughter's outfit, a black and white striped T-shirt dress that extends farther than her fingertips, with the caption: "What is more important here? My daughter's skirt length, or her PHYSICS AP TEST SCORE? She also had an [Advanced Placement U.S. history] test, and a LATIN 3 test, back to back. Don't understand how this is a dress code violation. She's 5'9". It's hard to find anything that fits longer."

According to the Abuabaras' own account on Instagram, the skirt wasn't in violation of the dress code, with less than four inches between the end of the dress and her knees, which is the official dress code rule.

Nonetheless, Sophia Abuabara was, according to Yahoo Style, still reprimanded by the school's vice principal, who told her to call her mother and get a pair of pants or a change of clothes. Her mother arrived shortly thereafter, but without the extra set of clothes. She thought, with three exams that day, that her daughter shouldn't be getting harassed for her outfit anyway.

The mother then proceeded to have a conversation with the principal that ended with her getting escorted off campus, a 14-minute video she posted on Facebook.

The younger Abuabara, meanwhile, was allowed to stay at school in her outfit.

"This issue was addressed by campus administrators in a manner consistent with other dress code concerns on their campus,"  Barry Perez, the executive director of communications for Northside Independent School District, said in a statement to Mic. "The student was not taken out of class during a test. She visited with a campus administrator after her test was completed. No disciplinary action was issued. Campus administrators have met with the student and her parents to discuss the matter and it has been resolved."

This is the kind of story that might sound familiar. There have been several cases now of girls getting dress-coded at school for outfits that seem more unlikely, like this 16-year-old girl in Kentucky who was asked to change because her dress showed her collarbones, and this sixth-grader who wore a denim skirt and was told that it looked like it was for "clubbing."

Given so many cases like her daughter's, this fight isn't over just yet for Abuabara, who told Yahoo Style that she plans to go to the American Civil Liberties Union over the ordeal.

"I'm going to call the ACLU to see if they can give me some idea of how to proceed with this," she said. "This has never happened to us before. I'm considering going to the school board."

Mic has reached out to Rosey Abuabara for further comment.