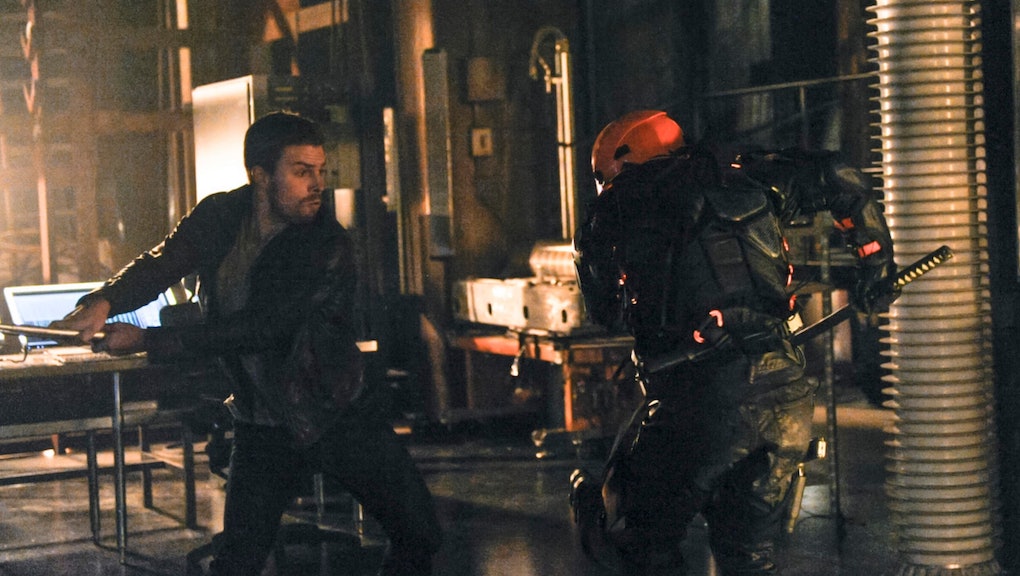 While Prometheus may be Arrow's major antagonist in its resurgent fifth season, it appears that another one of Oliver Queen's former adversaries will soon be making his return. Following a series of tweets from Arrow star Stephen Amell and series producer Marc Guggenheim, TV Line confirmed that Manu Bennett will return as Slade Wilson/Deathstroke in the series' season five finale.

A masked Deathstroke most recently appeared in Arrow's historic 100th episode, which was part of the CW's massive "Invasion!" crossover. In the episode, Deathstroke was an adversary of Team Arrow's in the shared dream between Oliver, Thea, Ray, Sarah and Diggle. In Arrow's season five finale, on the other hand, it sounds like Deathstroke's return will very much be real.

Stephen Amell kicked off the news of Bennett's return by tweeting a picture of Deathstroke's mask with the following caption: "Desperate times call for desperate measures. Welcome back @manubennett."

It appears that Manu Bennett was hoping to keep the reveal a surprise, as he responded to Amell with a very simple tweet: "WTF???"

Bennett later tweeted, "For the record — I'm not going back for Arrow!" Considering that Marc Guggenheim has confirmed that Bennett is indeed returning for the season five finale of Arrow, it seems that the actor may be indicating that Deathstroke will not be returning to go after the Green Arrow. Could it be that Oliver seeks out his old enemy for help defeating Prometheus?

Once Amell let the cat out of the bag, Guggenheim took to Twitter to reveal the official title of Arrow's fifth season finale: "Lian Yu."

Lian Yu is the island that Oliver Queen spent some time stranded on, and was eventually rescued from in the series' first season. Lian Yu is also the location of a secret ARGUS prison where, as of season three, Deathstroke is locked up. And there are a few reasons why Arrow's season finale would be titled "Lian Yu."

We have known for some time that Arrow's flashbacks would be coming to an end in season five. This is, of course, because the series' flashbacks have almost caught up to the events of season one. In a recent episode of Arrow, Oliver tells Anatoly in a flashback that he will soon return to Lian Yu, since the island is the best cover for his whereabouts the last five years.

In "Lian Yu," it is likely the flashbacks will end with Oliver returning to the island to eventually be found and returned to his home. But it could be that the present storyline primarily takes place on the island as well. Perhaps Oliver goes to Lian Yu, not only to recruit Deathstroke to his cause, but also Black Siren, who we know will be returning in the finale, before joining the series as a regular in season six. While we do not know for sure that Black Siren is being kept on Lian Yu, we do know that she is in ARGUS custody.

Who else will return?

Manu Bennett's Slade Wilson and Katie Cassidy's Black Siren are not the only characters who will be returning for Arrow's season finale. Shortly after confirming Bennett's return, Guggenheim revealed there are still a few more announcements to come. And we now have one of those announcements.

Entertainment Weekly revealed on Tuesday that Nyssa al Ghul, played by Katrina Law, would return for several episodes in season five, ending with a showdown between her and half-sister Talia al Ghul. Talia has appeared in season five of Arrow as an ally — and more recently as an enemy — to Oliver.

It was revealed shortly after Prometheus' unmasking as Adrian Chase that Talia had been instrumental in training the villain as part of a revenge plot in retaliation for Oliver killing her father, Ra's al Ghul. Whether Nyssa comes to the aid of Oliver, or has some other beef with her half-sister, is as of yet, uncertain.

Regardless, it certainly sounds like Arrow's season finale is shaping up to be one of epic proportion.