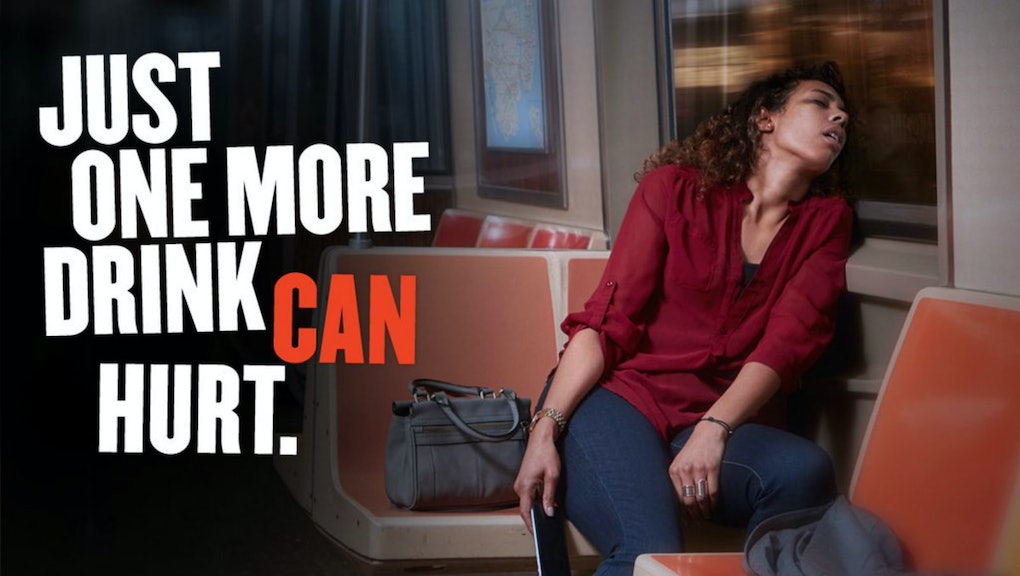 In victim-blaming PSA, New York blames drunk women for their own assault

Drink too much, and you might get yourself assaulted.

That seems to be the victim-blaming message behind a New York City Health Department poster that was recently called out by the Village Voice.

The ad is part of the Health Department's "One More Drink Can Hurt" campaign, which debuted in 2014. Other posters in the series are geared toward men and warn against stereotypically masculine activities like barroom brawls: "Keep your friends from hurting themselves or others," one poster reads, its text written beneath a photo of a male bar patron winding up for a punch.

This poster, featuring a woman, is quite different. The woman is shown slumped over and snoring in a subway car, apparently exposed to and defenseless against potential threats. Next to her is the campaign tagline: "Just one more drink can hurt."

It seems to be a textbook case of victim blaming. Instead of warning people not to commit assault or thievery, it warns women not to drink so much lest they put themselves at risk of being attacked or robbed.

In a statement to the Voice, Stephanie Buhle, a spokesperson for the Department of Health, said the ad was crafted after focus group feedback. Buhle said the message is that "excessive drinking can result in someone passing out and being vulnerable to having valuables taken — and ending up in Coney Island when your stop was at Delancey."

Unfortunately, the ad exemplifies an all-too-common attitude toward dealing with sexual assault: Blame women and everything they do. Asking an assault victim what she wore, whether she was drinking or whether she fought back are all ways of shifting the blame for sexual assault onto the victim — and off the person or people who took the opportunity to violate a drunk person.

"Our call to action in this campaign is to have New Yorkers watch out for their friends," Buhle said. "In creating this scenario, we chose a large purse and a dangling cell phone to emphasize vulnerability."

As the Village Voice pointed out, the ad ignores the fact that assaulting or robbing a drunk person is a crime. Rather than teaching people about bystander intervention or telling predators not to assault sleeping women, New York City chose to remind women that if you're a woman, you should live in fear — constantly.