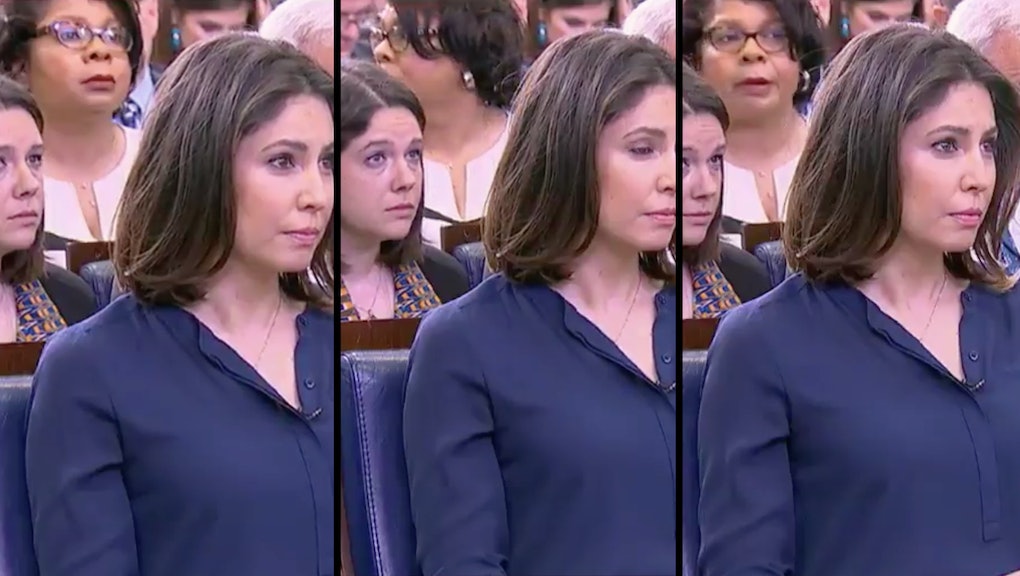 Have you ever asked yourself, "How would I react if a well-educated government official stood in front of me and tried to act like Hitler didn't kill millions of German Jews with chemical gas?"

White House correspondent April Ryan has just given you your answer.

During Tuesday's White House press briefing, press secretary Sean Spicer said that Hitler, unlike Syrian leader Bashar al-Assad, never used chemical weapons to attack Jews. Later, when asked to clarify his comments — because, you know, that's exactly what Hitler did — Spicer had this to say:

"He was not using the gas on his own people the same way that Assad is doing. There is not ... he brought them to the Holocaust centers. I understand that."

First, when Spicer suggests that Hitler did not kill Germans the way Assad has killed Syrians, Ryan's head pops up like, "Did he just say what I think he just said?"

Then, Ryan takes a swift look around the room to see if she's the only that realizes that Spicer is straight-up failing some grade school history in front of the press' very eyes.

Just to make sure she hasn't entered an episode of Scare Tactics and Shannen Doherty isn't about to pop up and surprise her, Ryan takes a second look around the room. This head swivel includes a surprise "Nobody ... really? Nobody?" double take.

Then, it comes. The head shake. She pities poor Spicer. "Who taught him history?" she wonders. "Why do I have to sit here and listen to this man?" she ponders. Finally, she realizes the truth: he's trifling.

When Spicer returns to talking about Assad's specific bombing tactics, Ryan makes one last desperate plea to the room for eye contact. She hopes another soul sees what she sees.

Finding no one, Ryan bows her head, cleanses her soul of Spicer's scrub-is-a-guy-who-thinks-he's-fly nonsense and asks herself, "Why has it come to this?"

Ryan and Spicer do have a history. In March, Spicer told her to stop shaking her head during a verbal spar. Ryan had other run-ins with White House staff before that, as well. In February, White House staffer Omarosa Manigault reportedly physically intimidated Ryan, as well.