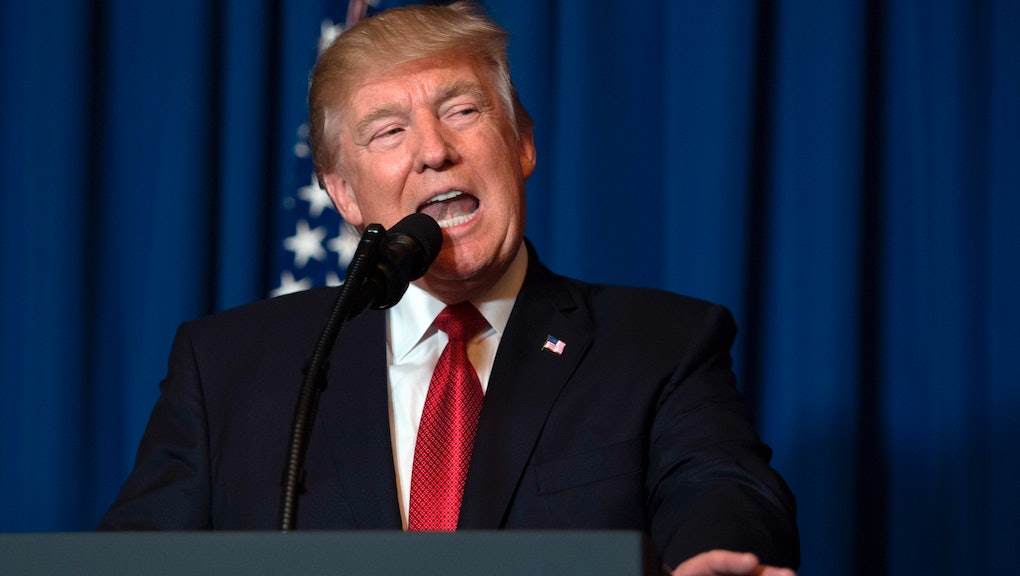 Donald Trump says "We're not going into Syria," but offers no further details

President Donald Trump said the U.S. is "not going into Syria" after his missile strike on a Syrian air field allegedly involved in chemical weapons attacks on civilians, Fox Business reported Tuesday.

"We're not going into Syria," Trump told host Maria Bartiromo during an interview which will be aired on Fox Business Network on Wednesday. "But when I see people using horrible, horrible chemical weapons ... and see these beautiful kids that are dead in their father's arms, or you see kids gasping for life ... when you see that, I immediately called General Mattis."

"What I did should have been done by the Obama administration a long time before I did it," the president added. "I think Syria would be a lot better off right now than it has been."

In a separate interview with the New York Post, Trump repeated "Our policy is the same ... We're not going into Syria" and added the number one U.S. priority in the country remains "getting rid of ISIS."

It's as of yet unclear what the president meant by "not going into Syria." While the comment seems to rule out deposing Syrian dictator Bashar al-Assad with U.S. ground troops, it could easily leave the door open to future military solutions like continued air strikes or arming opponents to Assad's regime.

The snippet released on Wednesday offers no further clarity as to what the White House's long-term strategy in Syria actually is. Trump's senior staff including U.N. ambassador Nikki Haley, Secretary of State Rex Tillerson and press secretary Sean Spicer have all offered conflicting accounts of what the administration's game plan is, varying from a "priority" on "regime change" to focusing on a political solution involving ceasefires and interim safe zones.

However, pressure had been growing on Trump to make some decision following days of silence on the issue and declarations from GOP Sens. John McCain and Lindsey Graham for the president to directly intervene in the conflict. The Russian government, which is closely allied with Assad, was furious about the strike even as the White House openly accused it of aiding and abetting the chemical weapons attack.

Before he launched the strike, Trump had loudly and repeatedly said attacking Syria was a bad idea that could possibly lead to World War III, even as Assad killed hundreds with chemical weapons.