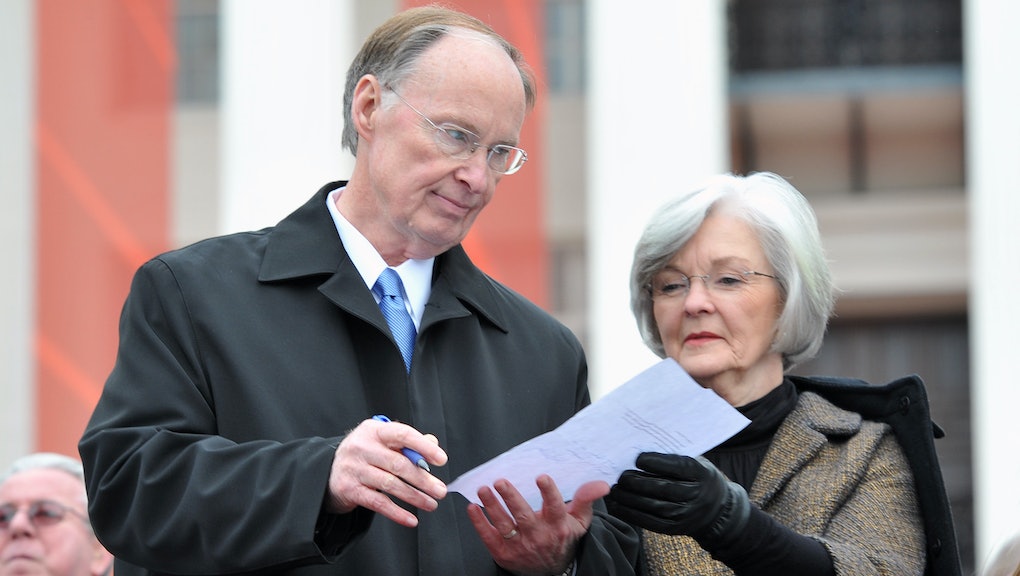 When male politicians do shitty things, their wives are generally expected to stand quietly and supportively behind them, in press conferences and in life.

Not Dianne Bentley, though.

According to Business Insider, when she discovered that her husband, Alabama Gov. Robert Bentley, was having an affair, she set the sabotage machine in motion that ultimately brought him down.

The governor resigned Monday as evidence mounted that he had violated a number of campaign finance and state ethics laws in pursuit of an extramarital relationship with his adviser Rebekah Mason. That the Alabama House Ethics Committee amassed so much evidence in the first place is thanks in no small part to Dianne Bentley, who saves receipts.

According to the impeachment report, the Alabaman first lady first sensed something was going on between her husband and Mason in September 2013. At the time, Mason had not yet moved to Montgomery and was living in the governor's mansion pool house. She was also, Bentley noticed, aggressively texting the governor during off hours and for non-gubernatorial business. But Bentley didn't get concrete proof until February 2014, when she and the governor attended a National Governor's Association in Washington, D.C. Mason came along, and Bentley saw her texting flirtatiously with the governor at the dinner table one night.

"I can't take my eyes off of you," the governor texted Mason, in full view of his wife, according to the report.

In spring of 2014, the governor made a few unambiguous fumbles that blew his cover. Once, he texted his wife to say, "I love you Rebekah." He also gave her his state-issued iPad, apparently oblivious to the fact that it was synced with his state-issued iPhone and that any texts he might send from that phone would be accessible on the iPad.

Dianne Bentley watched her husband call Mason "sweetheart" and overheard the pair discussing the governor's "Private Rebekah phone" and speak of making an escape together. Mason apparently called the governor a "handsome wonderful amazing funny sweet man," to which he responded, "You are wonderful my sweet love."

Bentley's wife took screenshots of it all, which can be viewed here.

She also obtained audio evidence. In March 2014, according to the report, she turned on her phone's recorder, dropped it into her handbag and told her husband she was taking a "long walk on the beach." She left her purse behind, and within one minute, the governor and Mason were chatting on the phone. Their conversation eventually took a turn from business to Mason's breasts.

Dianne Bentley filed for divorce in 2015 and handed over her evidence to the ethics committee in 2016. Taken together with accounts from staffers on both sides, who attested to threats and the misuse of state money in an effort to sustain the affair but keep it secret, it paints a very clear picture. The governor pleaded guilty to two misdemeanor charges on Monday, and will never again run for or occupy public office.

And that's why you always save receipts.