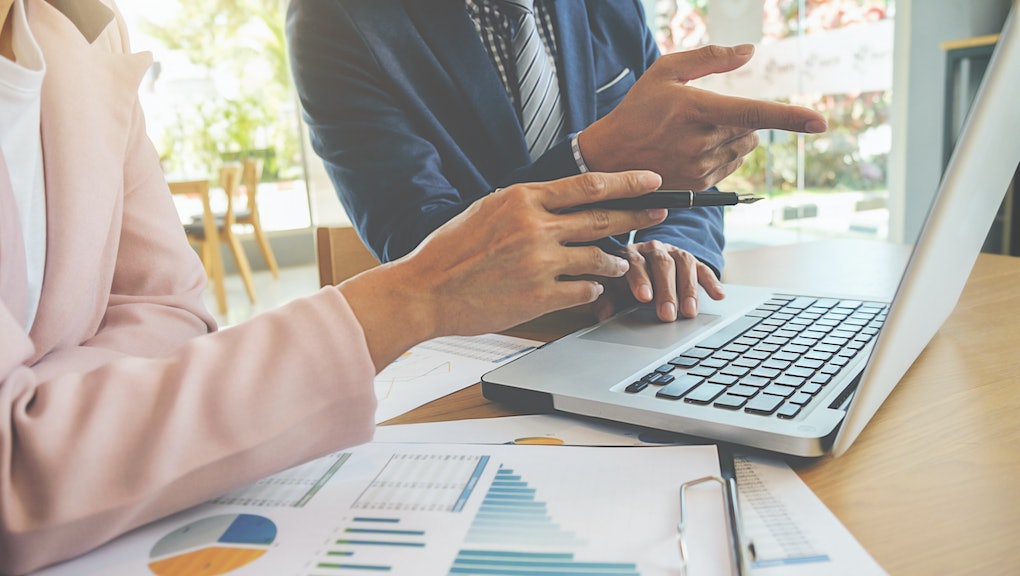 I e-filed with H&R Block — then called an accountant: Here's what I learned about taxes

Ahead of Tax Day 2017, I brewed a strong cup of coffee and sat down to face my fears: filing my 2016 taxes. Not gonna lie, I wasn't especially excited, and I know I'm not alone.

One 2015 survey revealed a majority of Americans would rather go to the dentist than file their taxes, and I'd have to agree. That pile of paperwork and tricky financial and tax terms filled me with more squirmy dread than the thought of a little plaque-scraping and chitchat about my love life.

While the idea of enlisting professional help has its appeal — since it might take some of the headache out of filing — I've always gone the DIY route and simply e-filed my taxes with tax software. Since I'm an unmarried millennial, typically have a simple income situation (one job, plus dividends) and don't own property, hiring an accountant has seemed like a luxury, not a necessity.

But this year I decided to try a little experiment. I'd calculate my taxes with software, as usual — but then I'd call a certified public accountant to see whether the CPA could have saved me more money. Depending on what I found, I might consider hiring a professional in the future.

Here's what I learned.

Since I used H&R Block's online tax software last year, I decided to use the software once again. A big plus: I was able to import my 2015 W2 because H&R Block already had it in its system.

I chose the "Deluxe" program because it said it was best for "deductions." Deductions means a bigger tax return, right? (Wrong, as I later found out.)

I prepared my federal return first, answering questions about wages, salaries and tips. Pretty painless thus far. Riffling through a desk drawer to find a W2 from a job I left in March 2016 was probably the hardest part of reporting my income. (But freelancers — I feel for you, and your drawers.) Onward!

I liked that H&R Block's software didn't bombard me with options. I was worried the decision-tree-like surveys wouldn't let me revisit information, but I never felt like I was being shuttled through too quickly. It felt idiot-proof.

Even when I thought I could get a tax credit because I use renewable energy for electricity, H&R Block gently let me down, telling me that the "energy-saving home improvements" credit only applies if you make a major overhaul, like installing energy-efficient insulation for your home.

The bad news: Filing my federal taxes took roughly an hour of my life that I'll never get back. I clicked "Next," "Back," and other buttons about 50 times. The good news? I did not have to call my parents for help once. Adulting!

With so much smooth sailing, I was doomed to fail at some point, and fail I did. I wasn't able to submit my state return until I submitted my federal taxes to the IRS and the government agency accepted it. After I submitted my federal return, I figured I wouldn't be able to continue filing my state return until a few days later — so I closed my computer and enjoyed a tax-free afternoon.

Oops! H&R Block emailed me a mere 17 minutes later to say my federal return had been accepted. Still, it wasn't until weeks later that I felt the motivation to finally log back into my H&R Block account and file my state return. (After getting locked out of my account, I had to reset my password, which was kind of a pain.) Filing my state return took roughly 20 more minutes.

Victory was sweet, but not that sweet: For the first time ever, I learned that I owed the government money! And I had to make a payment through payUSAtax.com, which required a $2.69 processing fee. Womp womp.

Sadly, I didn't realize until too late that I could have avoided that fee (it was small, but still) by paying my tax bills on the IRS site. D'oh!

Lessons already in hand, I decided to go a step further and get a second opinion on my tax adventure — and whether H&R Block had really done right by me.

What an accountant had to say

Though I was bummed to owe Uncle Sam money, I soon felt better: "As a tax accountant, my first reaction is, if you're getting a big refund every year, you're paying too much," Betty Isler, CPA and managing director at accounting firm CBIZ MHM, told me in a phone interview. "It's not something I strive for. I hope that by planning throughout the year, my clients don't get big refunds."

As Mic has pointed out, a large tax refund means the government has been holding your money and effectively costing you, by not allowing you to earn interest on it in a bank or investment account. A big refund could mean you aren't claiming the correct number of exemptions on your W-4, the form you fill out for your employer saying how much tax to withhold from your paycheck.

Translation: It's actually better to get your money throughout the year instead of letting the government take it ahead of time. Refunds are overrated.

Isler's advice made me feel better. But by using H&R Block's tax software instead of an accountant, was I leaving any money on the table?

"Not that you want a complex tax situation, but you're going to build up your career and ... [will] need some tax advice." - Betty Isler, CPA

Isler pointed out that tax software has several limitations. First of all, some of the questions on products like TurboTax and H&R Block can be confusing, causing you to calculate a lower tax return, she noted.

"One year I had three different people ask me to look at their returns," which they had calculated using software, Isler said. "They were paying unreported Social Security and Medicare tax. There had to be some question [in the software] that year that was confusing — that had them all end up with an additional tax," she said, accounting for a few extra hundred dollars lost.

(Alas, as Mic has previously reported, companies that sell tax software spend millions on lobbying against reform that might make filing simpler and cheaper overall — since it could hurt their bottom line.)

But, miscommunications aside, a human can also be particular helpful when you're older and your financial situation gets more complex, Isler said. They "know you and can look at your full picture." She explained that she advised one client of hers that her son, a high-schooler with a part-time job, didn't need to check the box to withhold his earnings for taxes in the first place — because he was earning less than $6,000 a year.

Isler did not say definitively that she could have gotten me a bigger refund this year, but she made a case for hiring an accountant in the future.

"Not that you want a complex tax situation, but you're going to build up your career and ... [will] need some tax advice," she said.

Thinking of merging finances with a partner, buying real estate or owning your own business? You'll probably want an accountant, she noted.

Using H&R Block's Deluxe service, I paid a total of $43.54 to file my state return and $48.98 to file my federal return — after a small discount off the sticker price for loyalty. I paid $92.52 in total. Americans spend an average of eight hours and $120 doing their taxes, and the services of an accountant might cost roughly between $160 and $270. So I arguably got off easy.

Would I use H&R Block again over hiring an accountant?

Yes, since my life and finances are straightforward, and I don't have kids, own property or run a small business. But I don't think the "Deluxe" filing software ended up helping me more than the basic free tax-filing software from H&R Block that I used last year: Since I took the standard deduction instead of itemized deductions and my tax situation was simple, I suspect I overpaid.

"Clients can call customer support to downgrade if that is the desire and still meets their filing needs," Gene King, a spokesperson for H&R Block, told me in an email. Yet I did not see a clear option in the software noting that I could make this choice — and potentially knock dollars off my fees by downgrading.

To be honest, I probably won't even bother at this point. I'm happy to not think about taxes again until next tax season rolls around. (Okay, okay — until December, when there are a bunch of deadlines to save on 2017 taxes.)

So what did I learn this year? Filing my taxes initially filled me with dread, and I was bummed to owe money, but chatting with Isler made me realize I had been handling my withholdings well all along — and essentially hadn't overpaid the government. Still, it kind of sucked to pay money on a tax service, only to learn I owed more money. Just goes to show how conditioned we are to be excited for a refund, even if that's based on faulty logic.