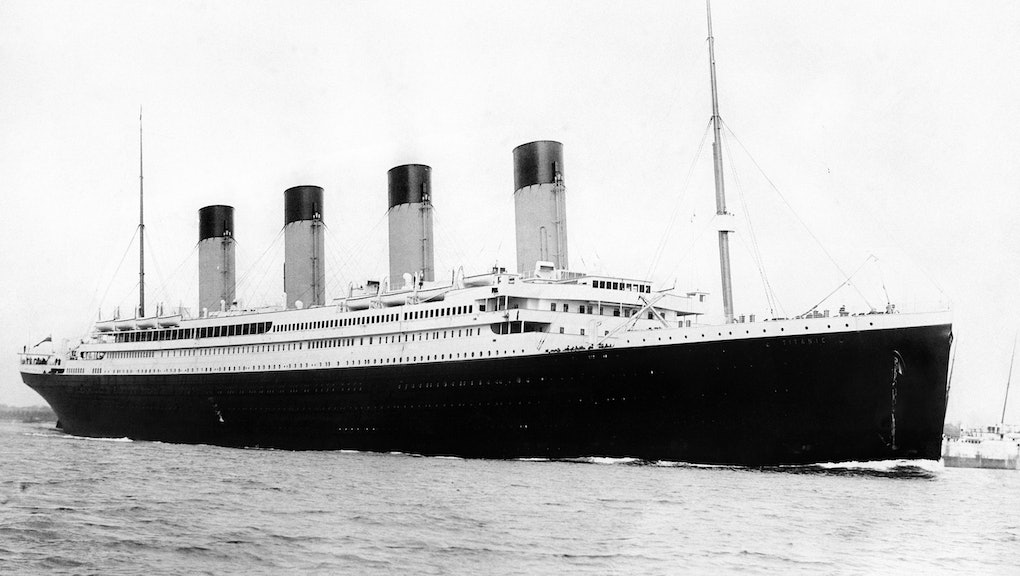 Saturday marks the 105th anniversary of one of the most iconic tragedies in history: the sinking of the Titanic.

The "unsinkable" ship's fateful end has since taken on legendary status. In 2012, Smithsonian reported the word Titanic is said to be the third-most recognized word in the world — just after God and Coca-Cola.

Here are 17 things you may not have known about the famed tragedy.

1. It was one of the biggest objects in the world.

The Titanic wasn't just large — it was the "largest moving, human-made object in the world," according to Live Science. The ship, whose 882-foot length spanned more than four city blocks, took two years and $7.5 million to complete.

The luxurious ship included a number of amenities that hadn't been seen on past ocean liners, according to the International Business Times, including a heated swimming pool, Turkish baths, a gym, a squash court and more. The Titanic was also the first ship to feature running water in all cabins, and, unlike most other ships of the time, it provided kosher meals for Jewish passengers. Though the first-class customers were most privy to the ship's luxuries, IBT noted even the ship's third-class lodgings were much nicer than those on other ships from that time.

3. The ship's maiden voyage went smoothly — before the iceberg, anyway.

Prior to its tragic end, the Titanic's maiden voyage was going well. The voyage enjoyed perfect weather conditions and was running on schedule. According to Ultimate Titanic, the ship's second officer Charles Lightoller noted "the sea was like glass."

Of course, those calm conditions wouldn't last long. Four days into the ship's journey — at roughly 11:40 p.m. April 14, 1912 — the Titanic struck an iceberg in the northern Atlantic Ocean and later sank into the sea at approximately 2:20 a.m. on April 15.

4. The actual collision wasn't that bad.

Though the iceberg would spark the vessel's demise, causing the ship's compartments to flood, the actual collision was relatively minor. The ship didn't strike the iceberg head-on, but rather turned and hit the iceberg on its starboard side, according to Ultimate Titanic. The "mild unexpected vibration of no major significance" led the crew to believe — at least momentarily — that the ship might be "unsinkable" after all.

Just before going to my state room, A11, there was a bump. As I turned the handle of my room [door], there was another bump. As I got into my room, there was a third bump ... like little pushes, nothing violent. ... As I got out onto the promenade deck, I saw a large grey, what looked to me like a building, floating by. But that "building" kept bumping along the rail, and as it bumped it sliced off bits of ice [which] fell all over the deck. We just picked up the ice and started playing snowballs. We thought it was fun. We asked the officers if there was any danger, and they said, "Oh, no, nothing at all, nothing at all, nothing at all. Just a mere nothing. We just hit an iceberg."

5. An onboard fire might have contributed to the disaster.

A recent discovery suggested there may be more than the iceberg to blame for the ship's tragic end. In a documentary that debuted in January on Britain's Channel 4, author and journalist Senan Molony reported the Titanic's bulkhead steel — in the exact spot struck by the iceberg — had been weakened by a massive fire in one of the ship's coal bunkers.

"The bulkhead was not worthy of the name," Molony told CNN. "It completely compromised the ship and led to an accelerated sinking — Titanic couldn't stay afloat long enough for an effective rescue."

Regardless of the cause, the Titanic's demise was a deadly one. Only 711 of the 2,223 total passengers and crew members on board survived the ship's sinking, according to the Ultimate Titanic.

The survivors were largely women and children, who were prioritized to board the ship's limited number of lifeboats — even above men who had paid for first-class accommodations. Forty-six percent of third-class women were saved, compared to 33% of men in first class. Almost all women traveling in first class survived, along with 86% of women in second class.

7. The Titanic actually had more lifeboats than were legally required.

The Titanic carried just 20 lifeboats with a total capacity of 1,178 — far below the number of passengers. This limited capacity, however, was actually more than legally required. At the time, maritime safety laws dictated the number of lifeboats based on a ship's "gross register tonnage," rather than the number of people aboard. Those laws were later overhauled following the Titanic disaster.

8. The limited lifeboats weren't full for a reason.

The limited number of lifeboats, however, weren't filled to capacity. Had they been, hundreds more could possibly have escaped the sinking ship. Ultimate Titanic suggests several reasons for the underused capacity: During the immediate aftermath of the collision, passengers may have been reluctant to leave the splendor and comfort of the Titanic for the small and, potentially, structurally unsound lifeboats. In addition, crew members reportedly wished to get the lifeboats down quickly and assumed the half-empty boats would return later to rescue passengers who were in the water.

Those who escaped aboard the lifeboats were rescued by a nearby ship, the RMS Carpathia, which arrived in New York City on April 18, 1912.

After the Titanic struck the iceberg, those on land didn't immediately know the accident's scale. According to Variety, White Star Line initially sent out a false report claiming the ship had survived the iceberg, that everyone was fine and the ship was being towed into Halifax. Once the public learned the truth, they were left "shaken and depressed."

Though the Carpathia's captain refused to allow members of the press onto the ship as it arrived in New York, Carpathia passenger and journalist Carlos F. Hurd, of the St. Louis Post-Dispatch, had already spoken to survivors and gathered notes for a 5,000-word story while the ship was still at sea, according to Smithsonian. Hurd smuggled the story off the ship by having a colleague pull a tugboat up to the vessel and throwing the manuscript onto it.

It was later published in the New York Evening World on April 18, the day the Carpathia arrived in port.

10. The tragedy was immediately the subject of stage productions.

Theater producers quickly capitalized on public fascination with the Titanic disaster. A vaudeville group in Gloucester, England, announced in May, 1912 that it would stage the disaster "with all the realistic details," according to Variety. The production The Sinking of the Titanic soon debuted in White City Park in Chicago.

As the Carpathia arrived in New York, filmmaker Jules Brulatour was on-hand to document the ship's arrival, producing a newsreel that debuted in East Coast theaters on April 22, according to Smithsonian.

"The motion picture may fairly equal the press in bringing out a timely subject and one of startling interest to the public at large," Billboard magazine wrote at the time.

Brulatour then produced a film depicting the tragedy, which starred his lover and Titanic survivor Dorothy Gibson, a silent film star. The film debuted just a month after Gibson disembarked on the Carpathia.

12. A shocking number of songs have been written about the Titanic.

The art world's continued Titanic fascination was also expressed through songs — more than 100 of them, in fact. Smithsonian reports that in 1912 alone, 112 Titanic-inspired songs were copyrighted in the United States.

13. It inspired a Nazi propaganda movie.

Around the world, the public's interest in the Titanic waned during the years of World War I and World War II, according to Smithsonian. That is, apparently, with the exception of Nazi Germany. According to the Telegraph, the Nazis produced a wartime movie known as Titanic, a propaganda film depicting the tragedy that was heavily critical of the British and featured a German as the ship's first officer. The film would later become known more colloquially as "The Nazi Titanic."

Though the film, the Telegraph noted, was considered "one of the most expensive and ambitious movies ever made" at the time, Nazi propaganda minister Joseph Goebbels quickly pulled the film from theaters, fearing its depiction of the tragedy would be demoralizing to the German people.

14. The story of the Titanic regained popularity in the 1950s.

The tragic event returned to popular consciousness in the 1950s, when Cold War fears and an ever-present nuclear threat sparked nostalgia for the fixed roles of early-20th century society and the "containable, understandable" nature of the Titanic's tragedy, according to Smithsonian.

During this period, two new films about the disaster debuted: Titanic, which starred Barbara Stanwyck, and the British film A Night to Remember. The latter was an adaptation of Walter Lord's successful 1955 book, which detailed the tragedy based on interviews with survivors.

"In the creation of the Titanic myth there were two defining moments," wrote one commentator, as quoted by Smithsonian. "1912, of course, and 1955."

After quieting again in the 1960s and '70s, the next wave of "Titanic madness" came about after the 1985 discovery of the ship's wreckage, found two and a half miles beneath the ocean's surface 370 miles off the coast of Newfoundland, Canada.

The discovery sparked public interest even more fervent than before, Smithsonian notes, and the eventual recovery of 6,000 artifacts from the wreckage led to worldwide exhibitions that extended public curiosity. Hollywood director James Cameron would later capitalize on this heightened interest and bring the Titanic myth to new heights with his record-breaking 1997 film.

The Titanic's last remaining survivor, Millvina Dean, passed away in 2009, erasing the last living link to the iconic catastrophe. Dean, a British citizen who died at the age of 97, was just 2 months old when she boarded the Titanic. Her family had been third-class passengers on the voyage, and Dean, her mother and brother were among the first to depart the ship on a lifeboat, according to the Guardian. Her father died during the sinking.

Dean gained fame following the discovery of the ship's wreckage. Cameron, along with Titanic actors Leonardo DiCaprio and Kate Winslet, were later said to have donated a combined $30,000 toward Dean's nursing-home care.

17. A Chinese theme park is being criticized for trying to capitalize on the tragedy.

Now, 105 years after the 1912 tragedy, people around the world are still fascinated by the sinking. In China, a new theme park in Sichuan province will feature a life-size replica of the iconic ship. Thanks to the 1997 film, the Titanic has "many Chinese fans," Shaojun Su, chief executive of Yongle Seven Star Cultural Tourism Development Company, told the BBC.

Members of the British Titanic Society, however, have criticized the theme park attraction — which was originally slated to have a "6D holiday experience" featuring a simulated iceberg crash — as insensitive to victims.