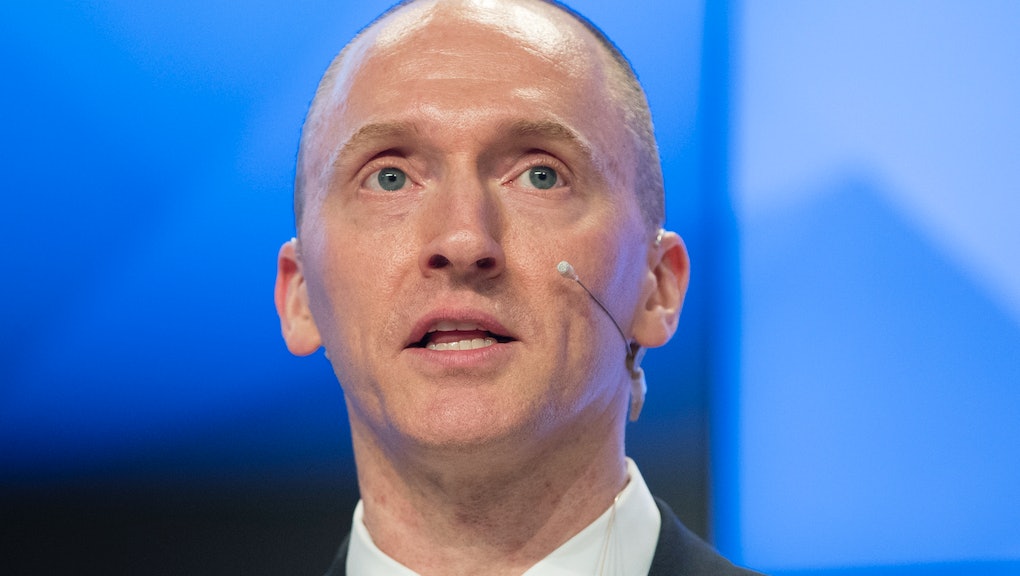 Today in Trump-Russia News: Carter Page surveilled under suspicion he was a foreign agent

Between a special election in Kansas, the ongoing Syria crisis, and Sean Spicer's accidental Holocaust denial, the latest revelations into the Trump Russia story have had a lot of competition for media attention.

But since the FBI just admitted they obtained a warrant to surveil a member of Trump's presidential campaign based on evidence they believe indicated he was an actual Russian spy, we should probably hang a lantern on it.

For months now, the American press has been trying to confirm claims first made in overseas outlets about the FBI obtaining a Foreign Intelligence Surveillance Court warrant to investigate a member of the Trump campaign. And last night that story finally hit U.S. newsstands.

According to the Washington Post, the FBI had probable cause to believe Carter Page, a foreign policy adviser to Trump's presidential campaign, was an "agent of a foreign power" and convinced a FISA court judge to grant them a warrant for his surveillance.

Just recently, Page had been identified by BuzzFeed as a previously unnamed source of Russian intelligence referred to in court documents filed in the prosecution of a captured Russian spy. In that case, Page appeared to have been unwittingly sharing information with the Russians.

The latest news suggests that the FBI suspected Page of being an active foreign agent intentionally working for Russia.

Over the past month, White House press secretary Sean Spicer has done his best to distance the Trump administration from Page, calling him and Roger Stone "hangers-on" to the campaign and claiming that "the greatest amount of interaction that they've had is have cease-and-desist letters sent to them."

There's just one problem with that explanation, Trump is on tape praising Page as one of campaign's foreign policy advisers. In a March 2016 interview with the Washington Post, Trump listed the names of his brand new foreign policy advisory team. Carter Page was the second name out of his mouth.

House Intelligence Committee chair Rep. Devin Nunes (R-Calif.) has suffered yet another humiliation at the hands of the Trump administration. Nunes stepped down from his position leading the House investigation into Trump and Russia after it was revealed he was being used by the White House to present intelligence to support Trump's claim he had been wiretapped.

Now a bipartisan review of that intelligence by Nunes' House colleagues finds that it in no way supports that claim.

The intelligence review also contradicts the claim made by Donald Trump that former National Security Adviser Susan Rice broke the law when she requested that the names of several Trump officials be unmasked from foreign intelligence. Aides who spoke to CNN described Rice's requests as "normal and appropriate."

Remember how Paul Manafort's name showed up on that mysterious ledger of off-the-books payments made by former Putin-backed Ukrainian President Viktor Yanukovych? Well, now the Associated Press has confirmed that at least $1.2 million of that money was actually paid out to Manafort.

This could spell trouble for Manafort who is already being investigated for shady financial dealings in Cyprus and set to testify before Congress soon.

The AP also reports that the lobbying organization Manafort worked for while overseeing a covert lobbying campaign on behalf of Putin-backed Ukrainian political parties has officially registered with the Justice Department as a foreign agent and admitted it may have done work that benefited the Ukrainian government. That move may have come in anticipation of Manafort's testimony.

• Can Trump bomb his way out of the Russia mess? (Vanity Fair)