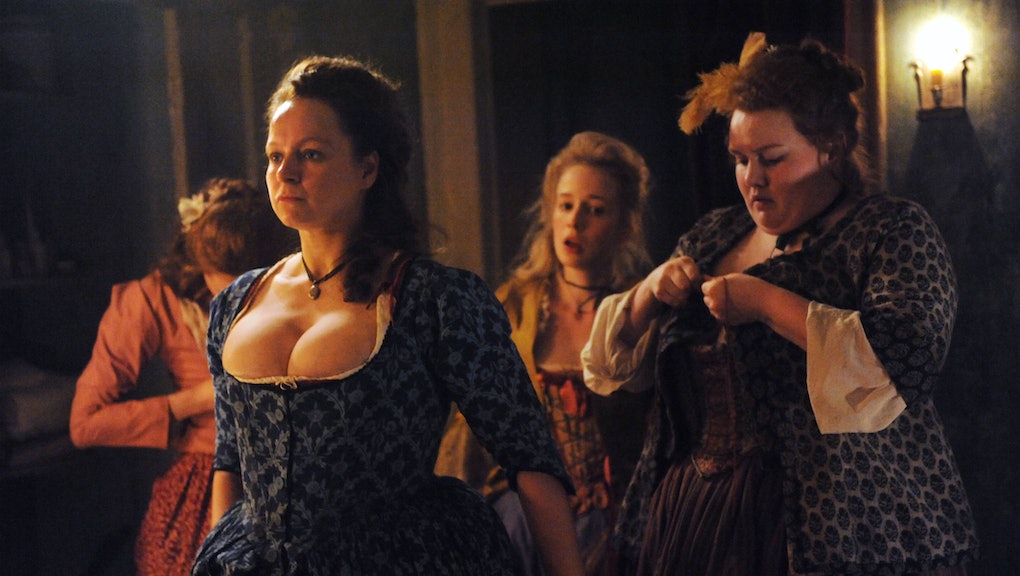 Hulu is riding feminism hard in 2017 with two provocative shows featuring women taking control of their bodies: The Handmaid's Tale and Harlots. Even though Handmaid's Tale was based on a book that came out in 1985, and Harlots focuses on 18th-century England, both seem oddly relevant to what women are facing today in America. With President Donald Trump in office, women once again find their reproductive rights under attack, but they're fighting back with a vengeance. Both these shows demonstrate a similar fight against masculine oppression. Harlots, however, does it in a seemingly antithetical way — through the eyes of female prostitutes.

At first glance, Harlots appears to paint a dismal picture of women's lives in 18th-century England, where one in five women sold their bodies to make a living. The story focuses largely on Margaret Wells, played by Samantha Morton, who runs a lower-end brothel in London, and her two daughters. Jessica Brown Findlay plays her oldest daughter, Charlotte — a high-end prostitute who's staking her ground in high society — and Eloise Smyth plays Lucy, whose virginity is to be sold at auction in the first episode. This premise sounds rather tragic, but there's an important distinction: These women genuinely seem to revel in their work.

One of the very first scenes has the women of Margaret's brothel clamoring over the latest issue of Harris' Guide to Covent Garden Ladies — a prostitute review book of sorts in which each eligible lady is ranked and critiqued. It may seem crass and degrading, but since it's also their business, the women outwardly deal with it as if they had been given access to everyone's grades in school — with playful, lighthearted attitudes.

"The women that it's about use humor as a weapon and as a sort of shield," Harlots creator Moira Buffini told Indiewire. "We sort of thought, we should write about how they survived, rather than how they were oppressed."

Harlots Executive Producer Debra Hayward continued, saying sex work was a booming business at this time in England, and one of the only ways a woman could be financially independent of a man.

"If you were the daughter of a wealthy aristocrat and you married somebody else, your fortune instantly became his fortune," Hayward told Flavorwire. "Prostitution then was one of the only ways that women could be socially mobile."

So these women became experts on separating emotion from body exploitation. Granted, that likely wasn't always easy, as is demonstrated in episode one when Margaret throws up after selling her daughter Lucy's virginity to the highest bidder. It also doesn't mean the work wasn't degrading from time to time, but at least it was one way for women to take back some control in a world that regarded them as second class citizens. Since sex was the hot commodity, sellers had all the power.

The women on the show cope with the mental and physical pains that come from such a lifestyle with rousing competition, fashion and flippant humor usually having to do with male genitalia. They also often work together to overcome circumstantial obstacles, like when Margaret was in danger of losing her new brothel in Soho.

Finally, according to Buffini, who is part of the show's all-female creative team, the women of this period were just as concerned about reproductive health as we are today. They actually had reusable condoms (called "cundums") which were made out of sheep guts. "All you did was rinse and reuse it," Buffini told Indiewire. "So it was kind of disgusting, but ecological."

If the sexist oppression radiating from the White House is wearing on you, this show might just be the perfect antidote. It's a colorful reminder that women have struggled through the ages, and they've never stopped fighting for a better life.