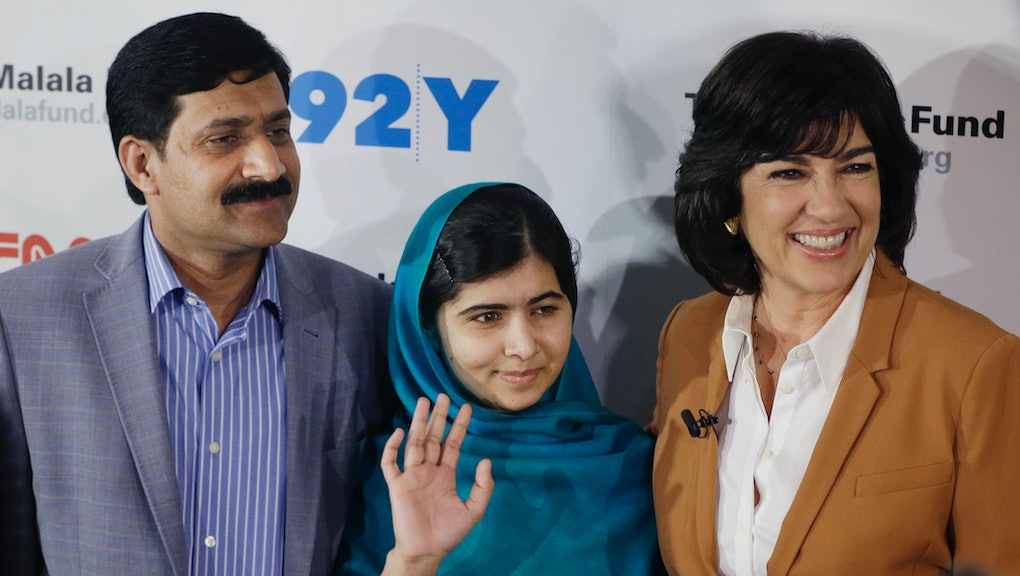 Like his daughter Malala, Ziauddin Yousafzai has committed his life to education and women's rights. Now, after leaving Pakistan's Swat Valley and residing in the United Kingdom, Yousafzai is continuing his fight for girls' education alongside his Nobel Peace Prize laureate daughter.

On Monday, before Malala kicked off her Girl Power Trip, Mic spoke to her dad at the United Nations' General Assembly hall about feminism, Donald Trump, the refugee crisis and the rise of Islamophobia.

Mic: As the father of a global feminist icon, what is your message to other fathers and men in the world?

Ziauddin Yousafzai: Whenever people see Malala being courageous, poised and brave, people assume I have done something special in my mentorship to bring her up. But the reality is that — and I say this to people: "Don't ask me what I did, but rather ask me what I did not do. I did not clip her wings."

So to all parents — especially to fathers, brothers and patriarchal societies, even those in the developed world — I tell them the only thing you need is to believe in the equality between a boy and a girl. There's no difference between a man and a woman. Once you believe in that, it's very easy. That belief and mindset brings a big change. It makes your own life very free. When you respect the freedom of others, you are free yourself.

You're Muslim and you're a feminist. A lot of people — mainly those who have negative perceptions of Islam — find that as a contradiction. Do your feminist beliefs come from Islam?

ZY: When I heard stories of Prophet Muhammad (peace be upon him) of how he would stand for his daughter Fatimah as a sign of respect. He, I would even say, respected her too much. So stories like this inspire me [as a feminist].

But also, as a human being, my conscience tells me — and education that I have — tells me it's very natural to believe in human equality and women's equality.

A few days ago, Trump launched airstrikes targeting Syrian President Bashar Assad's airfield after reports that sarin gas was used on civilians. He also signed an order blocking refugees from entering the U.S. as a way to "protect Americans from terrorist attacks committed by foreign nationals admitted to the [U.S.]." What do you think about all of this?

ZY: It's so sad and tragic that on one hand, you close doors to victims — peaceful people who suffer because of these wars and conflicts. Then, on the other hand, you bomb them and don't let them flee the country. That's just unacceptable.

Islamophobia — particularly anti-Muslim violence and hate crimes — in the U.S. is at its worst now since 9/11. Did you have any fears before boarding your flight to NYC?

ZY: [Islamophobia] is always fearful. I don't live in America, but I can tell you my experience in the U.K. My wife and I usually take a walk outside in Birmingham. But when [the terrorist suspect] ran his car on Westminster Bridge and killed more than five people, my wife said she could not go. She told me she was scared, because anybody can harm us since we aren't from [England]. We are like guests here. We migrated here.

What do you think is at the root of Islamophobia?

ZY: But what's wrong with the western world? They make a mistake when one single incident — done by a lunatic man, like in Westminster Bridge or in San Bernardino, [California] — and say, "oh, these 1.6 billion people are terrorists." It's very unfair. It's very unjust.

Whenever I go to America, or any country in the West, I tell them when you see anything in the news that spreads Islamophobia – whether that's Fox News or any other channel — don't believe it. Don't take it as some divine script from God. Don't take Islam from one bad guy's action. Just ask your Muslim neighbor who he is and what is his faith.

It's unfortunate the media spreads Islamophobia.

What is one message you would like to deliver to Trump?

ZY: [Trump] should know that we all belong to this Earth and it belongs to us. He has this big opportunity to lead this great nation. It is up to him in how he wants to be remembered in the U.S. Does he want to be known as a person who spread division or as a man who brings people together, brought harmony and love to the country and world as a whole?

You always have choices — big or small. America's help with UN funding is huge. If he intends to cut down all the support, it's really inhumane. Humans are suffering in the rest of the world and it's the responsibility of the U.S., and other developed countries, to come forward and help these conflicts, support all people fleeing wars. We will never have the certainty of knowing we're safe. But if we really want to be safe [from terrorism], we have to work for peace all over the world. I think it's all about collective responsibility, as human beings and citizens of the world, to come forward with compassion and love for everybody.

This transcript has been edited for length and clarity.