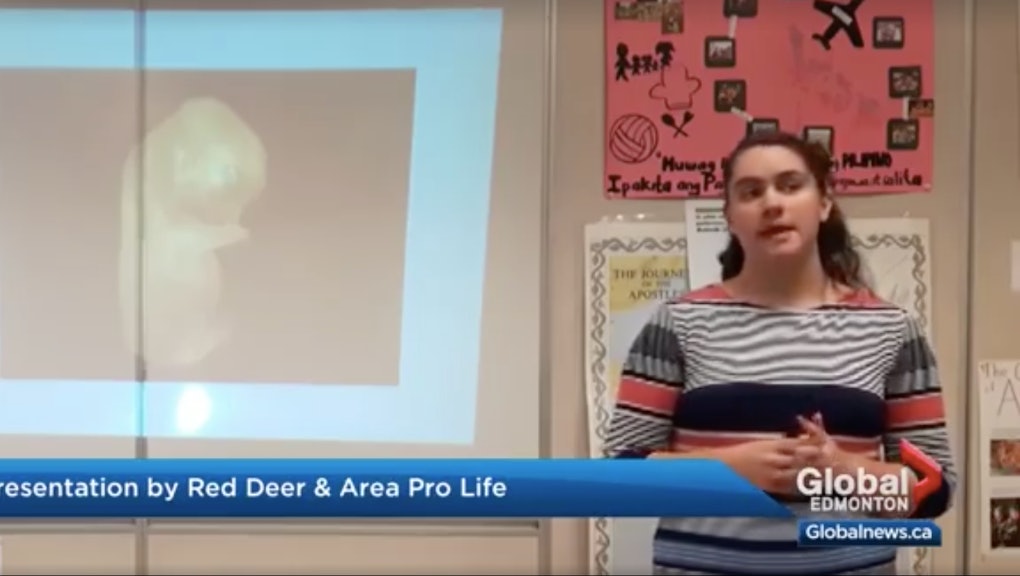 The United States isn't the only country in which outlandish and inaccurate information about abortion is allowed to flow freely. As Refinery 29 reported, a high school in Alberta, Canada, is navigating controversy after a speaker compared abortion to the Holocaust during a presentation.

According to Global News, a speaker for Red Deer and Area Pro Life stopped by a religion class at École Secondaire Notre Dame High School in Red Deer, Alberta, during March. She showed a video from Abort73 entitled "The Case Against Abortion, Personhood" that discussed a "scheme by which severely disabled children could be murdered" in Adolf Hitler's Germany, according to Global News. It made particular reference to Auschwitz.

"Then once the war began," the subtitles reportedly continued, "this killing was extended to disabled adults as well (and then to all 'unwanted' persons)."

The presentation came to administrators' attention after a student filmed it, and eventually the footage made its way to Alberta Education Minister David Eggen, who told Global News that the presentation was "completely outrageous."

"This sort of material doesn't belong in any school, quite frankly," Eggen said.

"Certainly for a Catholic school, abortion is an important topic for them but we don't talk about abortion by lying and exaggerating and comparing it to the Holocaust," Cristina Stasia, founder and chair of Accessing Information Not Myths, a sex education resource, told Global News, adding that the "astounding medically inaccurate information" offered to students was "shocking." AIM is seeking an investigation into sex ed methods across Alberta.

According to Global News, this was not the first time this particular anti-abortion group had visited the high school, and it won't be the last — although this particular video has been banned. Joel Soodsma, who sits on Red Deer and Area Pro-Life's board, later told Global News that the group stands by its presentation.

"We think the comparison is valid," Soodsma said. "We are just a little disappointed in the minister of education for calling it 'hateful propaganda.'"

We're obviously speaking for the babies, the unborn, and I don't think anybody in Canada hates babies — certainly not us. So why it was 'hateful', we don't understand, and why it was 'propaganda' — if it's not a fair comparison, then show us that, but we think it is.

Abortion opponents worldwide have linked termination of pregnancies where the fetus would definitely be born with severe disabilities to executions of disabled people in Nazi Germany, and characterized abortion as a separate Holocaust. The rhetoric in this group's video is full of inaccuracies, and unfortunately, it's far from confined to Canada.