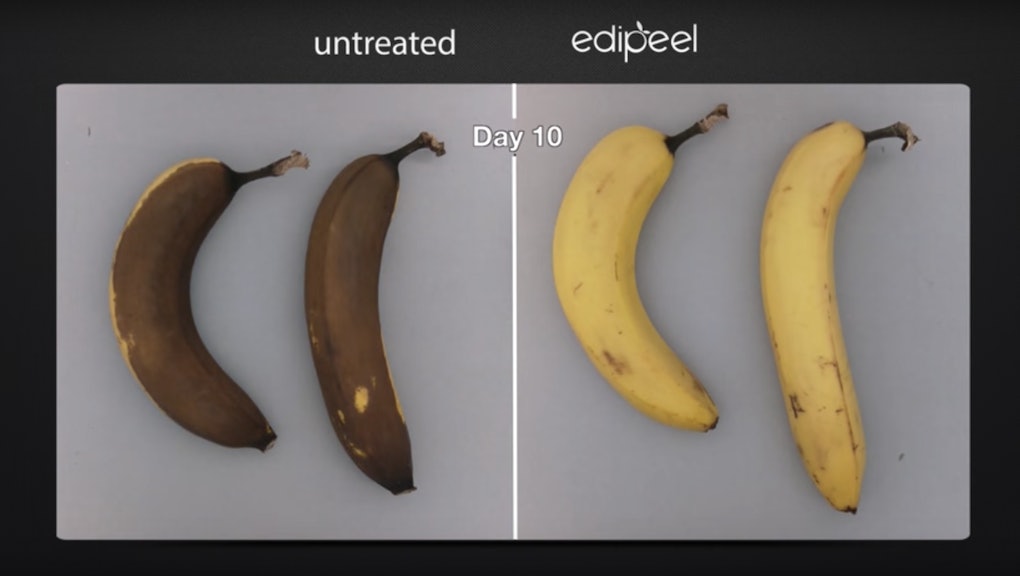 Nothing stinks (literally) like rotten produce. Roughly half of the produce in the U.S. gets tossed out and wasted, but one inventive company hopes to put a dent in that statistic by coating produce with a protective and edible "peel" made from food scraps.

Apeel Sciences, a California start-up that's backed by the Bill and Melinda Gates Foundation, has developed two types of edible protective barriers that could revolutionize the produce aisle. One "peel" called Invisipeel is applied while crops are in a field while another "peel" called Edipeel is applied after farmers harvest crops.

How Apeel extends the shelf life of fruits and veggies

The power of Edipeel lies in the "micro-thin" barrier that rests on top of the peel of produce like avocado, James Rogers, founder and CEO of Apeel, said in an email. "This barrier protects it from abiotic stressors that cause fruits and vegetables to spoil, like water loss and oxidation, as well as biotic factors, like bacteria."

The gifs below demonstrate how Edipeel can keep fruits fresh for longer.

It's always a race against time when it comes to keeping produce fresh. Currently, many packers and growers use waxes and chemical treatments to prolong the lifespan of produce. For example, apples in the U.S. often have a wax applied to them so they retain moisture and appear shiny. (The wax is safe to eat, Snopes noted.) You can see the wax if you pour boiling water on certain kinds of apples, like this YouTuber did.

Unlike waxes and chemical treatments, "Apeel's solution works with nature, allowing for the right exchange of oxygen so that the produce can continue to ripen, just at a much more gradual rate," Rogers said.

Because the "peels" are made from discarded foods like tomato skins and watermelon rinds, Apeel is actually a double threat when it comes to reducing food waste. "The plant extracts that we use for our formulations are all found in huge quantities in the fruits and vegetables you eat every day," Rogers noted. Grape pressings, orange peels, broccoli stems, stalks and leaves are also used to make the edible peels.

The tricky part: There's no "one size fits all" recipe for the peels — each type of produce requires a unique formulation. To test out formulations, Apeel needs a large quantity of each type of produce, Rogers said. The short growing season for certain kinds of fruit and veggies means the team has to work quickly, he noted.

"Natural spoilage begins the moment fresh produce is harvested so the earlier Edipeel can be applied, the better," Rogers said, explaining that farmers will either spray or dip crops during the harvesting process.

For Apeel, the biggest challenge is scaling up production to meet demand from large farms. Rogers said he hopes to make the product more widely available in Kenya and Nigeria.

"If we can slow down the rate that produce spoils, we can get more fresh, nutritious fruits and vegetables to more people around the world so less people go hungry. This has been Apeel's mission since day one," Rogers said.