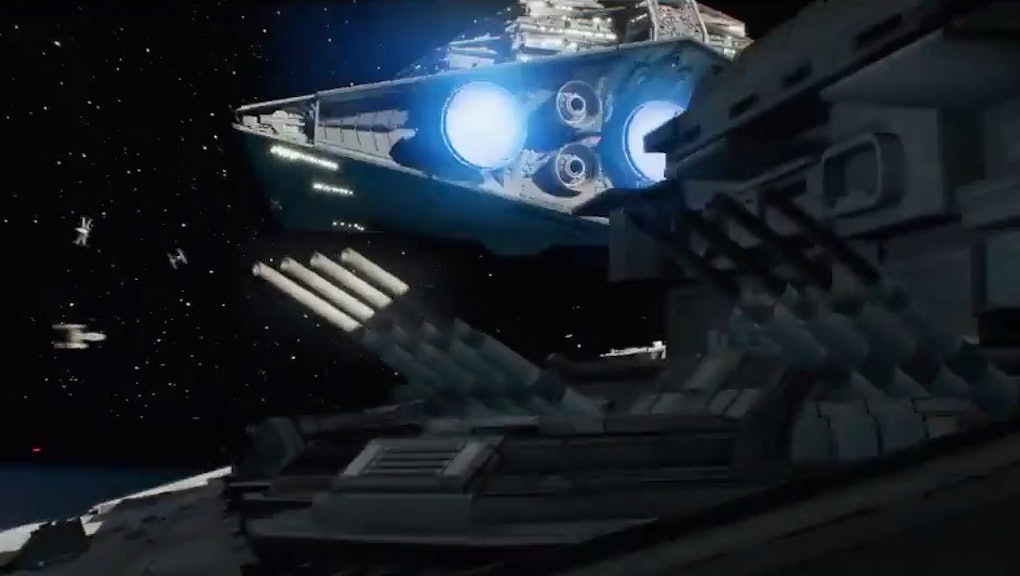 The cat is out of the bag with the leak of the Star Wars Battlefront 2 trailer, and besides the odd choice of name — being that it's the fourth game in the series and shares its name with the second — it looks like it'll have some of the features fans craved from EA's first entry in the series.

While critics praised Star Wars Battlefront (2015) for its graphical prowess and fast-paced arcade action, many were disappointed by the lack of variety in the initial maps and the horrible way the DLC ultimately fractured the community. In comparison with the previous Battlefront entries by Pandemic Games, EA's first crack at the series seemed a bit barren, but they'll have a chance to make it right this year. Below we'll show you our six greatest wishes for Star Wars Battlefront 2 (2017).

I've got nothing but love for the original trilogy but limiting Star Wars Battlefront (2015) to just characters, vehicles and locations from Episodes IV, V and VI — and kind of The Force Awakens — severely limited the gameplay. The first two Battlefront games featured locations from the prequel and original trilogies and weren't afraid to get a little non-canon if it helped gameplay.

Furthermore, Battlefront (2015) released a month before The Force Awakens came out, but only explored that movie in the Battle of Jakku expansion which was only tangentially related to the events of the film. The Battlefront series has the potential to take players all over the Star Wars galaxy. The centerpiece for a game like this should be the latest content in the Star Wars universe. Not just maps set in familiar areas like Endor, Tatooine, and Bespin.

Season passes for games are a way of life now, and that's an unfortunate trend we must face. However, it's a real problem if dividing the player base between those who do and don't have new content ruins the experience for everyone.

That's what happened with Star Wars Battlefront (2015). You could only join playlists arranged by downloadable content in that game, so you could only enter matchmaking for the original base set of content or one of the four DLC packs.

With matchmaking handled this way, there wasn't a method to just cycle through all the maps you owned. Additionally, there was no way for the whole player-base to be matched together. If you wanted to play Death Star maps, you had to enter a queue with other players that only wanted to play the Death Star DLC. This split the active player-base five ways and made finding a game that much harder.

With Star Wars Battlefront 2 (2017), I'd like to see the season pass only offer timed early access to DLC and pre-order content. Another solution could be the ability to enter a central matchmaking queue that could allow those that just wanted to play, regardless of the map, to jump into the action quicker. Downloadable content should add to a player's experience, not make it more frustrating.

The amazing array of Star Wars vehicles that are available to use in the Battlefront series is one of the most fun aspects of the franchise. However, Battlefront (2015) moved away from the system used in previous series entries, where vehicles spawned in a set location and could then be boarded by players, to a power-up/pickup system.

By changing vehicles to having a more random appearance, Battlefront (2015) lost a vital aspect of the franchise. While vehicles were previously a major part of team strategy and essential tools of offense and defense, their latest iteration relegated them to being a novelty. We'd like to see a return to the old system and the return of some large maps where vehicles can be the star of the battle instead of a cheap way to get a few kills.

For anyone who's played a Battlefield game, the leveling system in Battlefront (2015) should be familiar. However, there's a major issue with balance in EA's Battlefront title that needs to be ironed out before the release of Battlefront 2 (2017). At level one, players start on an even keel with a decent automatic laser rifle — either the E-11 for the Imperials or the DH-17 for the Rebels. However, once you start leveling you get access to heavy blaster pistols, jetpacks, missile launchers, and other ordnance that destroys beginnings who don't have the equipment to manage a response. Matchmaking is supposed to pair players with those at the same experience level, but it has issues that sometimes mean high-experience players are paired with those who have just started playing.

Regardless of experience, the imbalanced heroes and villains make Battlefield (2015) a crapshoot. Though they don't appear in all modes, heroes and villains give a player a random chance to take the role of a major character from the Star Wars series. These characters are armed with powerful abilities and a ton of health, so they can completely decimate a team with ease. This means that even if you and your team are working together flawlessly, an opposing player can spawn as Darth Vader, or Luke Skywalker by random chance and wipe you all out without batting an eye. Heroes and villains are fortunately killable and time limited, but they should fit into gameplay in a way that doesn't make them cheap.

Space maps were introduced in the original Star Wars Battlefront II and brought a new and different dynamic compared to ground combat. Instead of running or driving toward the enemy base, space maps pitted starship against starship in an objective based mode. Some players would have to take the role of fighter pilots to defend their ships from enemies, while others would have to attack opposing starships with bombers. However, to take out the primary enemy ship, it would have to be boarded by ground troops.

Working as a team in three diverse playstyles proved quite the challenge, and if you didn't work together, you'd quickly fall to an enemy team that did. The lack of space maps in Star Wars Battlefront (2015) was a disappointment to fans of the series, and it would be great to see what EA can accomplish with current tech.