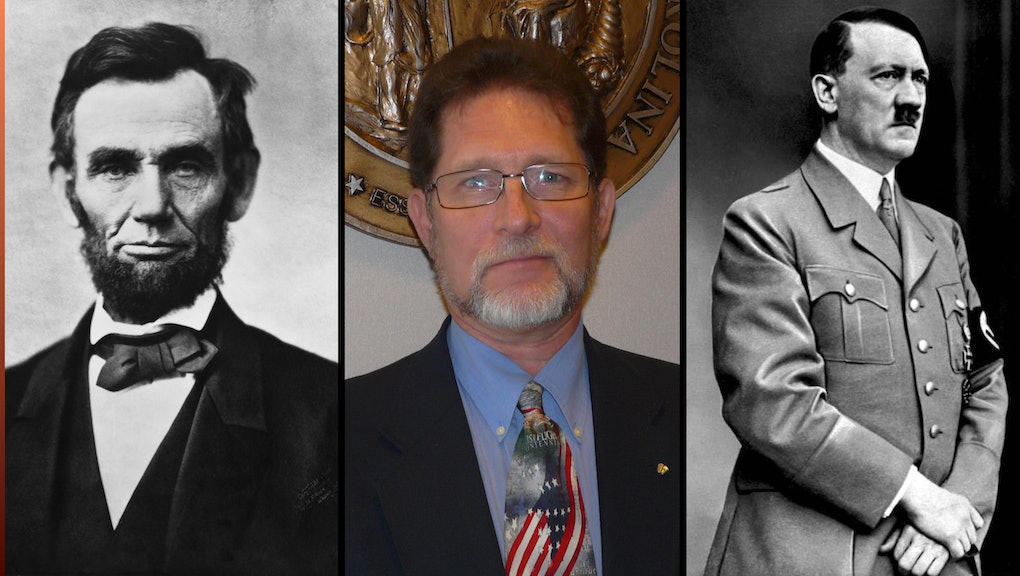 Fresh off of White House press secretary Sean Spicer's already-notorious gaffe denying Nazi dictator Adolf Hitler's use of chemical weapons, another Republican official has waded right into the completely unnecessary but inexplicably ongoing debate about how bad Hitler was.

According to the Charlotte News-Observer, North Carolina state Rep. Larry Pittman of Concord wrote in a Facebook post that President Abraham Lincoln was no better than Hitler, who exterminated millions of Jews and others deemed undesirable by the Nazi regime and launched a world war which killed tens of millions more.

In a Facebook post defending his bill to order North Carolina's state government to ignore the Supreme Court's 2015 decision legalizing same-sex marriage nationwide, Pittman wrote "... If Hitler had won, should the world just get over it?"

"Lincoln was the same sort [of] tyrant, and personally responsible for the deaths of over 800,000 Americans in a war that was unnecessary and unconstitutional," Pittman added.

While Lincoln did overstep his constitutional powers during the American Civil War, most notably by ordering the suspension of habeas corpus (right to fair trial) and declaring martial law, Pittman is engaging in some serious neo-Confederate revisionism. The Confederates launched the first shots of the war at South Carolina's Fort Sumter, and were notably motivated by preserving by force one of the most atrocious institutions in U.S. history: industrial-scale slavery throughout the entire antebellum South.

Lincoln, of course, also freed the slaves. Though it took an entire abolitionist movement to convince him to do so, the whole Emancipation Proclamation thing seems rather antithetical to Hitler's outlook on the matter.

Pittman's remarks are seemingly in sync with the increasingly racially hostile tone of the Republican Party's far-right factions amid the rise of President Donald Trump, which has energized white supremacists across the country. Some other prominent GOP officials like Maine Gov. Paul LePage have not abandoned Lincoln's legacy, but used it as an excuse to whitewash Trump's history of bigoted remarks.

Spicer was hit with accusations of Holocaust denial this week after he justified the Trump administration's air strike on Syrian strongman Bashar al-Assad, who has used chemical weapons on civilians, by saying even "someone as despicable as Hitler ... didn't even sink to using chemical weapons." Though Spicer quickly clarified he only meant to say Hitler did not use chemical weapons in open warfare rather than in concentration camps, the damage to his reputation was already done.