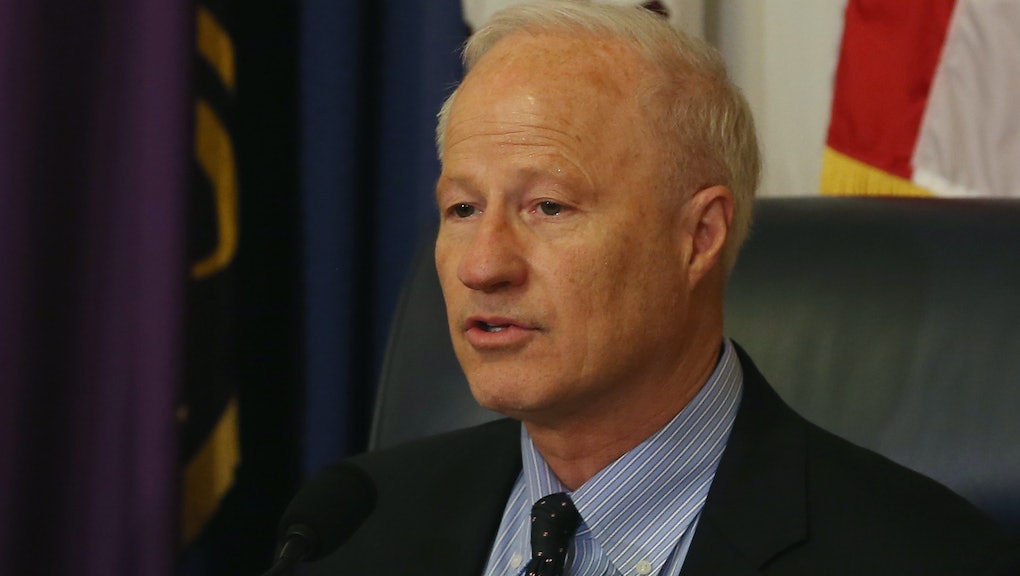 Rep. Mike Coffman (R-Colo.), one of the most vulnerable GOP House incumbents in the 2018 midterm elections, faced a hostile town hall crowd in his suburban Denver district Wednesday night. Constituents took Coffman to task over everything from his support of the failed Republican health care bill to White House press secretary Sean Spicer.

At one point, a woman who said her great-grandparents survived the Holocaust stood up to speak out against Spicer's favorable comparison of Adolf Hitler to Syrian strongman Bashar Assad — on the curious grounds that Hitler didn't use chemical weapons. Spicer made a rare, full-throated apology for the remarks, but that wasn't enough for Coffman's constituent.

"Spicer made a terrible mistake yesterday," Coffman said, according to CNN.

The crowd cut Coffman off before he could explain what Spicer said, leading Coffman to call for Spicer to step down.

"He needs to go," Coffman said.

Coffman's constituents also peppered him with angry questions over his support for the American Health Care Act, the Republican plan to repeal and replace the Affordable Care Act that crashed and burned in embarrassing fashion last month. Coffman supported the bill, despite the fact it had just 17% support among Americans.

"I'm sorry to say I was shocked when you declared your intention to vote for the American Health Care Act," Steven Haas, a registered Republican, said at the town hall, according to Politico. "That is not the way we do things here in Colorado."

The contentious town hall is a worrisome sign for Coffman, who faces re-election in a district Hillary Clinton carried by 9 points, according to the Cook Political Report, a nonpartisan outlet that specializes in congressional campaign analysis.

Coffman will need to convince voters who backed both him and Clinton to continue sending him to Congress, while at the same time appealing to base Republican voters who still back President Donald Trump.

It's a tough line to walk, and one that showed Wednesday night.

"I voted for you because I thought you'd be a leader," one constituent said at the town hall, according to Politico's report. "I don't see you leading."

Coffman is not the first member of Congress to face angry town halls.

Republicans across the country have been hammered by voters back home in their districts since Trump's election.

But Trump's approval rating has fallen steadily since he was sworn in on Jan. 20, especially following his ACA repeal efforts. Even in reliably red districts, Republicans are being forced to to stare down angry constituents at town halls this week — the first of a two-week recess for the Passover and Easter holidays.

Rep. Joe Wilson, the South Carolina Republican who shouted "you lie" at former President Barack Obama in 2009, faced the same chant from his own constituents at a town hall on Monday. Trump won Wilson's district by a 20-point margin, a sign that no one is safe from the anti-Trump anger sweeping the country.