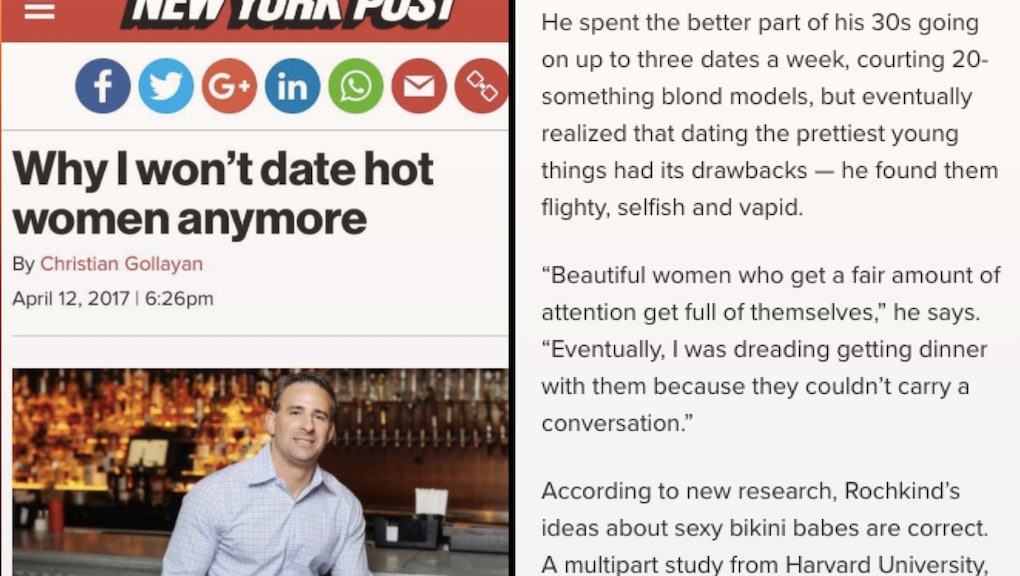 Men have different ways of showing their commitment to feminism. One courageous man, for example, is doing his part to smash the patriarchy by only dating average-looking women. Inspiring!

The New York Post published a piece Wednesday titled "Why I Won't Date Hot Women Anymore," profiling such a man: an insufferable private equity executive named David Rochkind. The 40-year-old Upper West Side resident humbly told the Post there was a time when he could have anyone he wanted, which meant he always went after the "hottest girl you could find."

After learning that hot women can't "carry a conversation," Rochkind reformed and started dating his fiancée, Carly Spindel, whom the Post calls a "merely beautiful woman."

As you can imagine, Twitter had some harsh words for the Rochkind and some words of advice for Spindel.

And at least one Twitter user saw an opportunity in Rochkind's swearing off of "hot women":

Rochkind joins the ranks of men like Dave Hon, the man who bravely penned the column "Why I'll Never Date a Feminist" in September to similar outrage.

To these men and others we say: Boy, bye.