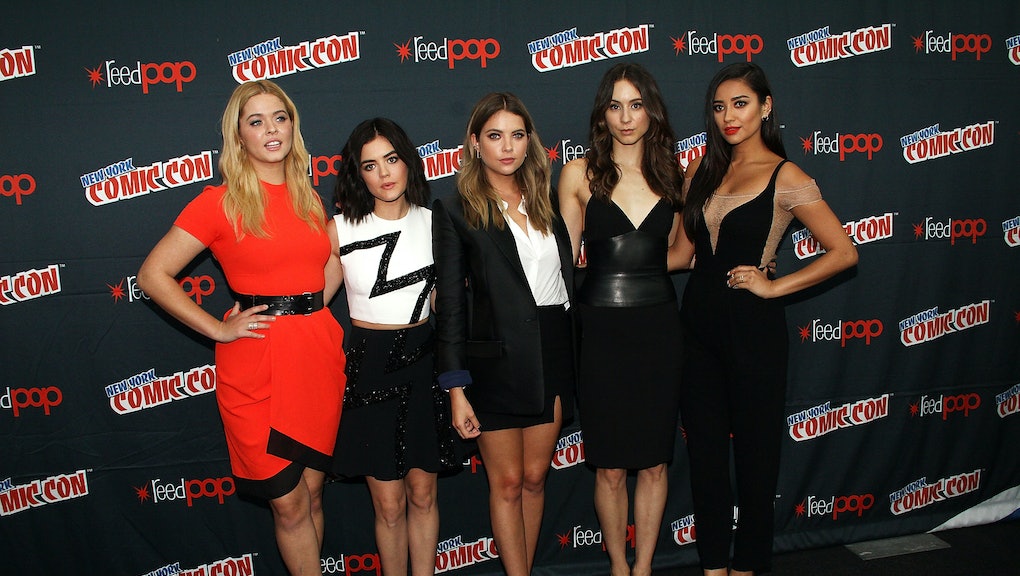 Who is Uber A on 'Pretty Little Liars'? Here are 10 of the most likely suspects.

Pretty Little Liars will kick off its last ten episodes on April 18, and the final season of the Freeform series will reveal the identity of Uber A, also known as A.D. The mysterious villain, who has been attacking the girls and taunting them with threatening emojis, is dark, violent and obsessed with Rosewood's team of best friends. Theories abound as to who the latest villain could be — and, thanks to the complicated plots from the past six seasons, the possibilities are seemingly endless. Below are just a few of the prime suspects for the Freeform series' Big Bad.

None of the dads on Pretty Little Liars are exactly contenders for father of the year,  but Aria's dad is by far the worst. His behavior has always been less than honest — cheating on his wife and asking his daughter to keep it a secret from her is just the start — and his fixation on Aria and Fitts was creepy, to say the least. Byron definitely has secrets, and him being one of the people who's tortured the girls for years wouldn't be a surprise.

Lucas has been a prime suspect for seasons, and we know he worked with Mona in the past. The high school dork turned wealthy business mogul just happened to be back in Rosewood at the same time the girls returned to town, and he seems a little too eager to help Hanna out.  He's carried a torch for the group's favorite blonde for years, and he's too smart for his own good. Who knows what he's capable of?

Last year's finale concluded with a gasping Jenna proclaiming, "You're A.D.," to an unseen face. Those two words alone may imply her innocence in the latest events, but we all know that Pretty Little Liars has endless tricks up its sleeve and that Jenna has been obsessed with revenge on the girls for years. (Remember when she shouted at them over an intercom blaming them for blinding her before chasing them around an abandoned house with a gun?) And she's capable of keeping secrets — like pretending to be blind when she could see. There's no way she's not involved in some way.

After the girls found Alison alive, the queen bee appeared to be a newly reformed good girl. She even decided to stay in Rosewood to take care of her sister and teach school. Before she disappeared, Alison was a scheming, plotting, duplicitous and manipulative teenage mean girl, but now she's a floral-dress-and-cardigan-wearing model citizen? This transformation is hard to believe.

Converter's zeal seems to run in the family. Jason, who used to drink heavily, is sober and apparently has all the answers, even going so far as to volunteer in Ethiopia. Then there's the matter of his longstanding thing for Aria. Was he really attracted to her, or did he just want a way to learn her secrets? And no one is that tan, blonde and chiseled without harboring some kind of secret.

Spencer held it together for seasons, until some truly extraordinary circumstances landed her in the Radley Sanitarium (In Pretty Little Liars, "extraordinary circumstances" translates into thinking her boyfriend had been plotting against her before stumbling upon what she thinks is his dead body in the woods). In the final moments of last season's finale, viewers learned Mary Drake was her mother. Given her ability and obsession with investigating, it's possible Spencer had known that all along and didn't let anyone know — and that might push the tightly wound perfectionist over the edge.

She hated Alison, she's always been possessive of Emily and she returned to Rosewood right as Emily was getting involved with Sabrina. What a coincidence! Not to mention, she has a dark side: Remember when she almost drowned Emily — before they started dating?

The dangerously charming Brit has been questionable from the pilot episode. And he's remained within arm's reach reach of the Liars since then, consistently a part of the latest threat or danger — as well as charming both Spencer and Hanna and being involved in Charlotte's life as well. We know he'll be back for the last 10 episodes, so the only question is "Why?"

Spencer's older sister always seemed too perfect: too smart, too poised and way too good at avoiding questions. Whenever Spencer found the courage to confront Melissa, she was always thwarted by Melissa deflecting and turning the question around on Spencer. Based on her connections to the police, that dangerously charming roommate of hers not and her ability to fake an entire pregnancy, it seems like nothing is impossible for the older Hastings sister.

Yes, she died in season two, but mysteriously returning from the dead is not unheard of in Rosewood. Maya always had secrets, as Emily learned again and again. Based on showrunner I. Marlene King's cryptic Tweet in response to a fan's query about Maya, let's just say this mysterious girl being Uber A is not impossible.