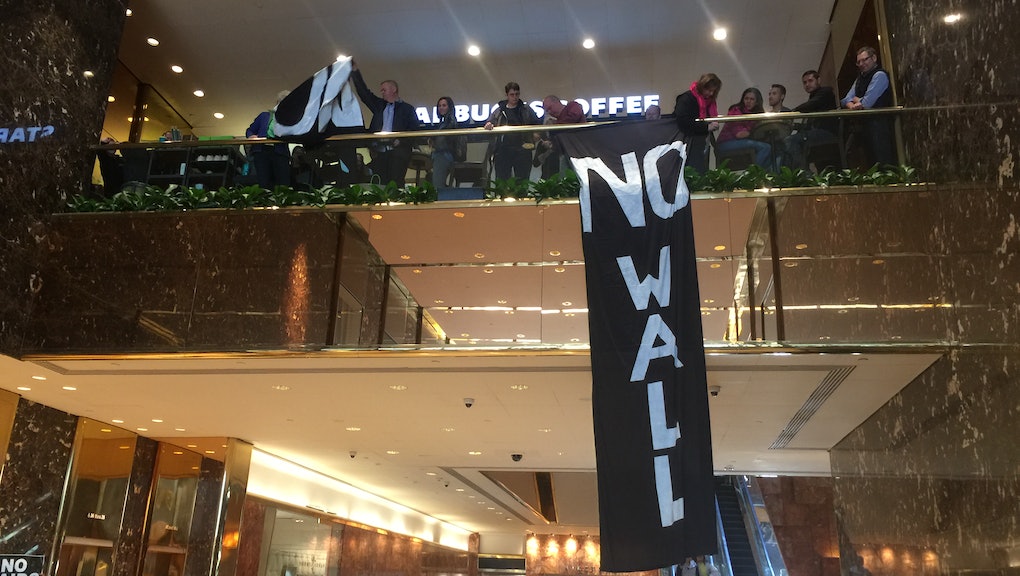 Nearing the 100-day mark in the presidency of Donald Trump — his so-called "Muslim ban" struck down, health care repeal stalled and approval ratings in the gutter — protesters are still raising a ruckus over his xenophobic and unsavory policy proposals.

Demonstrators shut down the entrance to Trump Tower on Thursday, taking over the lobby and sitting in protest of Trump's border wall proposal and immigration raids. The protesters, many of whom were elderly, were from a New York City direct action group called Rise and Resist, formed in response to Trump's election.

The protesters dropped banners reading "No raids" and "No wall" from the Starbucks balcony in the entrance hall to Trump Tower, tossing piles of leaflets to the ground and barricading the entrance to the famed elevators power brokers and politicians often ride to meet with now-President Donald Trump.

"Say it loud, say it clear, immigrants are welcome here," they chanted as security cleared the lobby.

Within ten minutes, barricades went up in front of the tower. With all casual visitors turned away, police spent hours dealing with the demonstrators.

Police arrested at least a two dozen protesters, dragging some elderly protesters and carrying others into police vans along the side entrances on 56th and 57th Streets.

As police put up more barricades, tourists stopped by, asking police officers if they were there because President Donald Trump was about to leave the building, walking away disappointed.