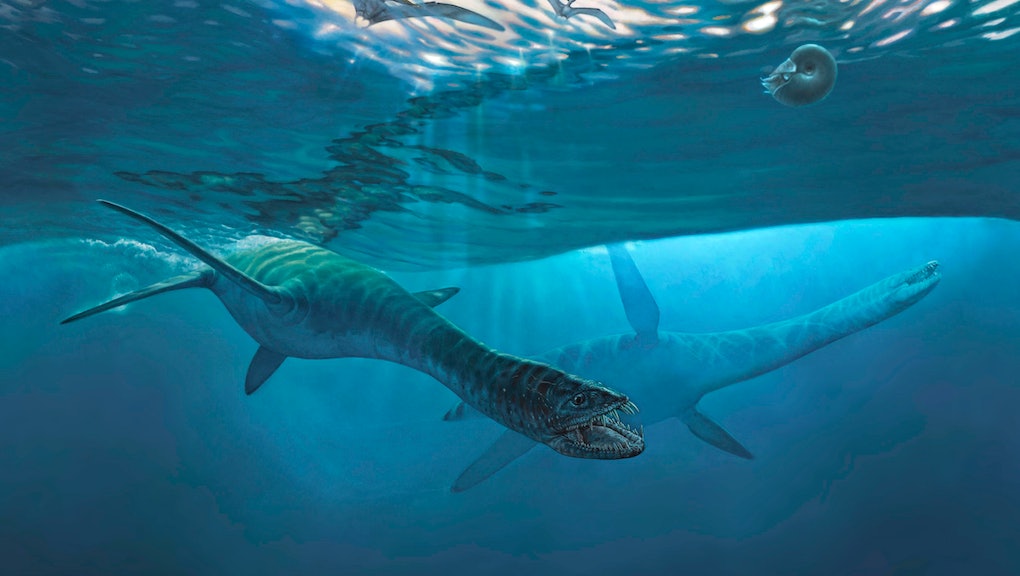 A hunter in Montana accidentally discovered this prehistoric sea monster

Seven years after an elk hunter accidentally stumbled on a fossil in Montana's Charles M. Russell National Wildlife Refuge, the new species he found by mistake has a name — Nakonanectes bradti.

"Nakonanectes" is to honor the native Nakona people of what is now Montana, and "bradti" is after David Bradt, the hunter who discovered the fossil, according to a statement from the University of Alaska, Fairbanks.

When Bradt first discovered the fossil in a stream in 2010, he believed it was from a dinosaur. "It's about the size of a cow, and I'm thinking it's a triceratops," he told the Associated Press. But when paleontologists excavated and studied the fossil, it turned out it belonged to a prehistoric sea creature that lived in an inland sea east of the Rocky Mountains some 70 million years ago, according to the AP.

The creature, as paleontologists realized, was a previously undiscovered species of elasmosaur, a carnivorous sea-dweller that had a tiny head and large, paddle-shaped limbs. Most elasmosaurs, the AP reported, had long necks that stretched up to 18 feet long. But Nakonanectes bradti, the new species that Bradt stumbled upon, had a much shorter neck.

"This group is famous for having ridiculously long necks, I mean necks that have as many as 76 vertebrae," Patrick Druckenmiller, a paleontologist at the University of Alaska Museum of the North, told the AP. "What absolutely shocked us when we dug it out — it only had somewhere around 40 vertebrae."

Nakonanectes bradti, the short-necked elasmosaur, has now officially joined the canon of known prehistoric sea creatures. The inland sea in which Nakonanectes bradti lived covered a large swath of what is now North America — it stretched from Montana to Minnesota and from Canada to the Gulf of Mexico, the AP reported.

There could be more fossils out there that belong to other as-yet-undiscovered species, Druckenmiller said. Someone just needs to find them.