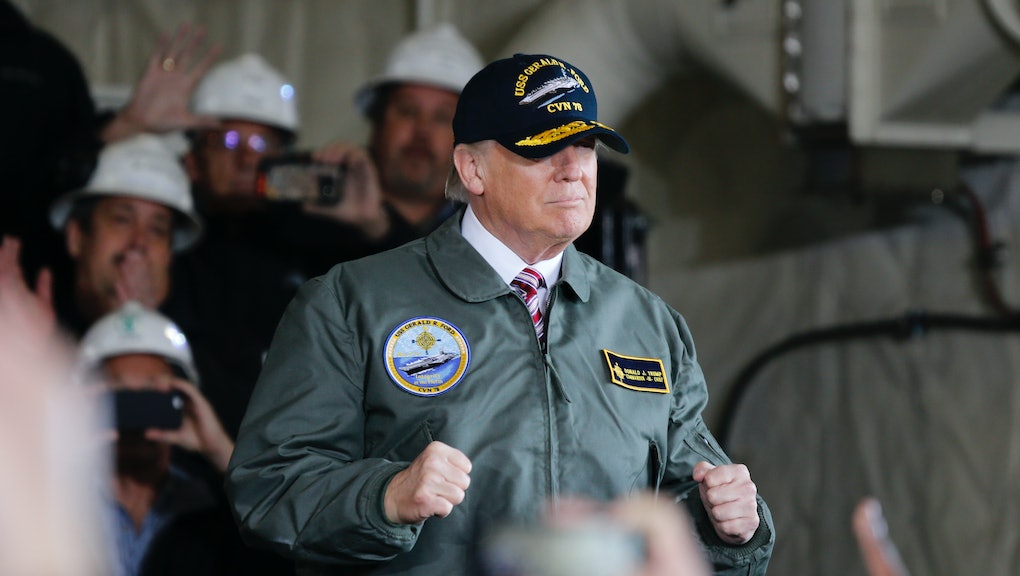 Who is driving Trump's new foreign policy, him or the military?

The last 24 hours have been an exercise in unbridled American bellicosity that the country hasn't seen since the early days of the Iraq War. First, the Trump administration dropped the "Mother of All Bombs," America's largest non-nuclear munition, on an ISIS target in Afghanistan. A few hours later, the administration signaled a potential pre-emptive strike against the rogue nuclear state of North Korea in anticipation of that country's potential nuclear test this weekend.

All of this represents a dramatic shift in Trump's foreign policy agenda and raises an important question: Has our impulsive president suddenly got a taste for war-making, or is he letting the many military leaders in his Cabinet run the show?

There is evidence for both hypotheses in the way Trump now talks about military action. When asked if he had made the call on whether to drop the MOAB in Afghanistan, Trump told reporters, "What I do is I authorize my military... We have given them total authorization, and that's what they're doing." The statement seemed to imply that military leaders had gone ahead with the strike without Trump's direct sign-off.

Then came troubling North Korea news. The impoverished and isolated Asian nation is getting ready for the birthday of its country's late supreme leader Kim Il Sung on Saturday. Many expect the current leader, Kim Jong Un, to test a sixth nuclear weapon. Speaking to NBC News, Trump officials signaled a potential pre-emptive strike, and the Washington Post suggested there are plans for a retaliatory attack if North Korea goes through with a test.

Given what we know about Trump, it's not hard to imagine that the praise he received from pundits and establishment figures after his missile strike in Syria may spur him toward a more aggressive foreign policy. It's also easy to see how the recent drop in stature by Trump's chief political strategist Steve Bannon has created space for military officials to move in and push a more activist postures in world affairs.

The distinction has real-world implications for the future of foreign policy. Is this the policy of military professionals or an erratic egotist with a short attention span? Has the U.S. military-industrial complex really been just one weak-willed commander in chief away from threatening pre-emptive strikes against a nuclear power or are they just carrying out Trump's orders? Events in North Korea this weekend could be an eye-opener for understanding who is really running the show.

Today: Activists prepare for Saturday's Tax Day protest, when thousands of people around the country are set to protest the fact that we still haven't seen President Donald Trump's tax returns.

More: There's a lot of chatter about another new Trump war front, this time against nuclear-armed North Korea.

Even more: Today is the last day of early voting before Tuesday's special election for Congress in Georgia's 6th Congressional District.

Trump's schedule: Trump is in Mar-a-Lago, with nothing on his official schedule. Golf, anyone?

Government shutdowns are back!

Washington is rebooting America's least favorite political drama, the government shutdown. This time, the Democrats are in the opposition. Trump floated the idea this week of cutting Affordable Care Act subsidies to bring Democrats to the table for health care talks — effectively taking low-income Americans' insurance as a political hostage. An aide to House Democratic Leader Nancy Pelosi of California told the Hill that move would be a "threat to keeping government open." The fact that Democrats are now the ones shutting down the government and Republicans are trying to keep it running is sure to make for a lot of hypocrisy trolling on both sides. The real thing to watch is how much Republicans actually want to own taking money away from health care exchanges and how successful Democrats can be in making sure voters know that's what's happening.

Tax Day protests around the corner

Even though Tax Day has moved to April 18 this year, plenty of people will be busy on April 15 trying to get Trump to finally release his tax returns. NBC News reported that this will be the largest protest action since the record-breaking Women's March on Washington in January, and the National Park Service is estimating around 10,000 marchers in Washington, D.C., alone. Follow along with Mic's live coverage over of the protests over the weekend.

An 'Apprentice' alum running for office in New Jersey is following in Trump's footsteps: A video tape has come to light showing him making explicit remarks about women (Mic)