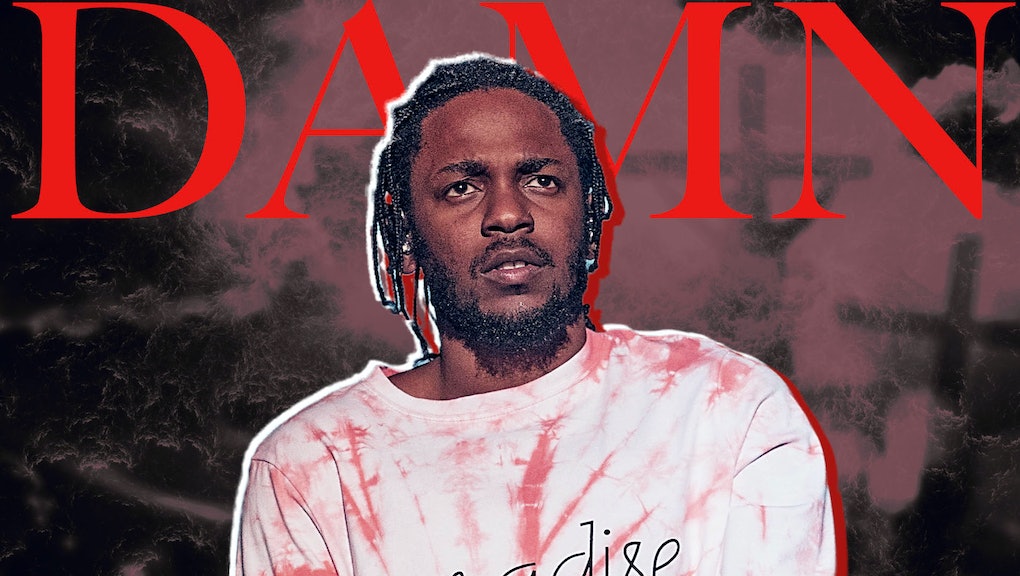 Kendrick Lamar 'Damn.': A glossary of all the spiritual, political and personal references

Kendrick Lamar's releases are not like other albums. They're great American novels in sonic form, literary epics disguised as blockbuster rap releases. Each of his last four records — from 2012's Good Kid, M.A.A.D. City up through Friday's Damn. release — has arrived brimming with religious symbology, literary allusions and biographical details from his Compton upbringing.

It usually takes several listens to begin to see all the ways the concepts weave to flesh out Lamar's revelations. To help expedite that process, we've put together a glossary for the key terms and references that the album leans on to deliver its message.

With a pair of headphones and some command+F work, the dedicated Kendrick scholar will make quick work of that journey from the album's surface to its heart.

Anthony was the oldest of seven

Anthony Tiffith is the label boss of Top Dawg Entertainment, which signed Kendrick Lamar when he was just 15 years old. In a 2013 Vibe profile, Tiffith shared a story of the first time he saw Lamar work in the studio:

When he first came to the studio. I put him in the booth and put this double time beat on, trying to throw him off. He went in there and started going off! So I'm trying to play like I'm not paying attention. He notices I'm not moving and starts going crazy. So I look up and I'm like, 'God damn. He's a monster.' So the next day I had a contract for him [Laughs].

Carl is Kendrick Lamar's cousin. His voicemail message opens "Fear." — on which Duckworth advises Lamar to quit the negative attitude and remember the words of the Good Book.

"Until we come back to these laws, statutes and commandments, and do what the Lord said, these curses are gonna be upon us," Carl tells Lamar. "We're gonna be at a lower state in this life that we live here in today, in the United States of America."

Just say his name and I promise that you'll see Candyman

This is a reference to the 1992 horror film Candyman, about a murderous, hook-handed monster that torments a town after an unwitting grad student says his name five times in the mirror. The line doubles as a potential shot at Jay Electronica, who mentioned Kendrick Lamar's name in a diss-filled Periscope rant.

Compton was the American dream. Sunny California with a palm tree in the front yard, the camper, the boat. Temptingly close to the Los Angeles ghetto in the 50's and 60's, it became "The Black American Dream." ... But the dream that many blacks thought they were buying has turned sour. Though the mayor and four out of five city councilmen are black, they have been unable to solve the problems of crime and growing welfare which is slowing turning suburban Compton into an extension of the black inner city. Crime is now as high as the ghetto.

Fake my death, go to Cuba, that's the only option

At the end of the second verse, Lamar entertains the thought of shirking the pressures of the rap life by faking his death and bouncing off to Cuba. Another hip-hop legend is rumored to have done the same: the "immortal" Tupac.

Deuteronomy 28:28 reads, "The Lord shall smite thee with madness, and blindness, and astonishment of heart."

Carl Duckworth's advice to Kendrick centers around this key passage in the biblical book of Deutronomy. The lines act as a warning to the Israelites about what will happen to them if they stray from their faith. Hebrew Israelites have frequently relied on verse 28 to prove they are the chosen people described in the Bible. As Carl says in his voicemail:

Because he said he's gonna punish us, the so-called Blacks, Hispanics and Native-American Indians are the true children of Israel. We are the Israelites, according to the Bible.

Before Kendrick Lamar became Kendrick Lamar, he rapped under the name K. Dot. As an acronym, D.O.T. generally stands for "damage over time." Used in the context of "Element." it serves as a promise that Kendrick is in the struggle for the long haul, picking apart his rivals' careers slowly over years.

See at this chicken spot

Ducky is short for Duckworth, Kendrick's real last name. Lamar uses it in "Duckworth" to tell a story about his father, Kenneth Duckworth, having a near fatal run-in with Anthony "Top Dawg" Tiffith.

A high-end French cognac, Kendrick likens drinking D'USSÉ to "drinking the Kool-Aid," a maxim that's long been used to denote a blind, cult-like dedication to a given lifestyle. That phrase comes from the Jonestown Massacre, in which 909 members of the People's Temple cult drank poisoned Kool-Aid in an act of ritual suicide. Lamar suggests that indulging in D'USSÉ, and the rest of rap's high-end vices, will lead to a similar doom.

Bad attitude for your nanny

Another city in Los Angeles County, Gardena borders Compton, where Kendrick grew up. Lamar seems to have memories there; perhaps it's where he spent time courting his fiancé,  Whitney Alford.

Somebody tell Geraldo this nigga got some ambition

In 2015, Geraldo Rivera, a Fox News pundit, attempted to make an example of Kendrick Lamar and use his 2015 BET Awards performance as a way to criticize the influence hip-hop has had on black culture. "This is why I say that hip-hop has done more damage to young African Americans than racism in recent years," Rivera said at the time. Lamar takes Fox to task throughout the album.

This that Grey Poupon, that Evian, that TED Talk, ayy

A brand of semi-fancy French mustard, it's been a common rhyme used to brag about status throughout hip-hop history. Vox authored an excellent explainer about it here:

I'm a Israelite, don't call me Black no mo'

The Israelites are the chosen people according to the Bible, as detailed in Deuteronomy. Here, Lamar appears to reject use of the word "black" to describe his identity and instead aligns himself with the Hebrew Israelites, a largely black religious group that believes they're descendants of the 12 tribes of Israel.

The Biblical verse James 4:4 offers another condemnation of the material world, saying it distracts one from coming to know God:

You adulterous people, don't you know that friendship with the world means enmity against God? Therefore, anyone who chooses to be a friend of the world becomes an enemy of God.

Better not hear 'bout you humpin' on Keisha's daughter

Keisha is a fictional prostitute that has appeared on several of Kendrick Lamar's albums, with his deepest examination of her struggle coming in Section .80's "Keisha's Song (Her Pain)."

It's the one and only, the world's greatest, the Kid Capri

"One of the most legendary DJs in the history of the game," according to Complex, Kid Capri appears throughout the album throwing out his characteristic hype track ad-libs, helping the album give off the aura of a classic hip-hop mixtape.

One of Kendrick's longest-running nicknames has a kick to it.

This how it is when you're in the Matrix

Kendrick has returned to the 1999 film The Matrix time and time again in his lyrics, mostly interpreting its plot as an allegory for freeing one's mind from the material world. A shot of the film's famous blue pill, red pill scene also recently spurred rumors that a second album would be following Damn. on Easter Sunday.

See once upon a time inside the Nickerson Garden projects

Nickerson Gardens is a public housing unit in Watts, California, where Anthony "Top Dawg" Tiffith grew up, and where the Bounty Hunter Bloods were formed, according to Genius.

Yoga on a Monday, stretchin' to Nirvana

Kendrick plays on the dual meaning of "Nirvana" in "DNA.," simultaneously referring to the ill-fated '90s grunge band and the state of final spiritual peace one achieves when they remove their spirit from the cycles of birth and death in Buddhism. The means of achieving it are markedly similar to those required of Christians seeking to enter heaven — detachment from material wealth, concentrated, selfless thought and deeply lived compassion for all living beings.

I feel like this gotta be the feelin' what 'Pac was

A nickname for one of West Coast rap's greats, Tupac Shakur, Lamar has long felt a strong kinship with the fallen rapper. Here, Lamar cites Tupac's apocalyptic fantasies, which the rapper detailed in his music from his debut, 2pacalypse Now, to his last, The Don Killuminati: The 7 Day Theory.

I can feel it, the phoenix sure to watch us

The Phoenix is a mythical bird that is cyclically reborn out of the ashes of his former self. It's a symbol long associated with the sun and later, Jesus Christ, who was reborn on Easter three days after his crucifixion on Good Friday.

I be hangin' out at Tam's, I be on Stockton

Short for East Stockton Street is where the Compton Swap Meet, a site for many of Lamar's Compton tales and the location where Lamar filmed parts of his "King Kunta" video, once stood. It permanently closed in 2015. "Tam's" is short for Tam's Burgers, where Lamar goes for "street-sloppy burgers and shakes" as he told Complex in 2012.

I need some water

Lamar's "Lust." makes a double-entendre out of water, using it to refer to two separate desires. The more obvious in this context is the phrase "thirsty," lusting after the sins of the flesh. But it also alludes to thirst for God, which Kendrick Lamar sang about extensively in "Sing About Me, I'm Dying of Thirst." Water is a key symbol in Christian theology, figuring into the baptism, Jesus' walking on water miracle and the transfiguration of water into wine.

Yeshua is the Hebrew spelling of the name Jesus, the god-hero of the Christian faith. Lamar frequently uses aspects of Christian mythology to paint himself as a similarly persecuted savior for rap, one of the most recent being his "Humble." video where he sits at the center of a scene reminiscent of the Last Supper before Jesus' betrayal at the hands of Judas Iscariot.