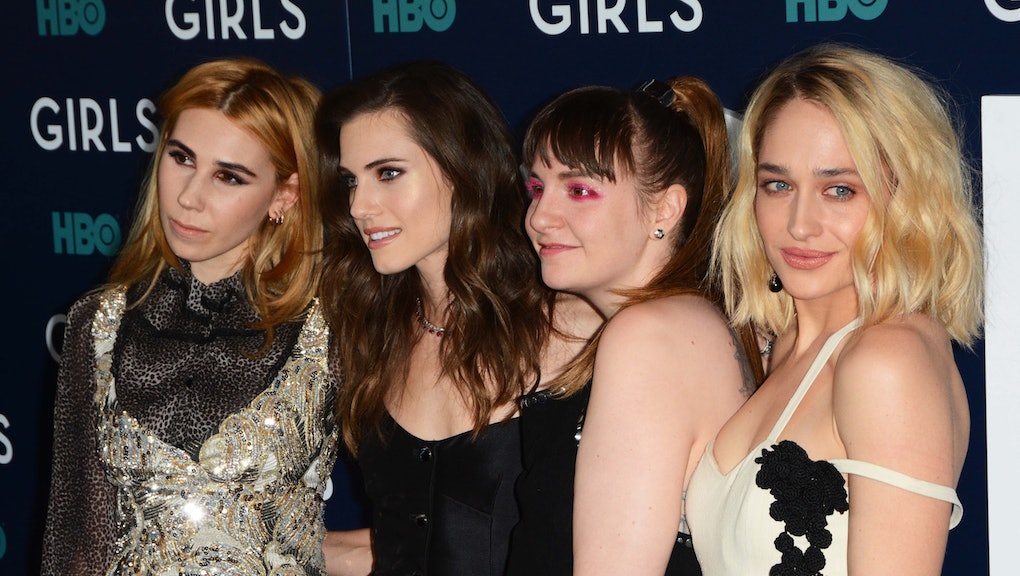 When Lena Dunham debuted Girls in 2012, critics compared it to Sex and the City, a show that ended eight years before Dunham would arrive on HBO. The comparison was apt: Both shows broke boundaries around sexuality, showed women concerned about their professional lives as much as their romantic ones and placed female friendships at their zeniths.

It was such an easy one-to-one comparison to make that Dunham wrote a coy reference to the iconic show into her series premiere. "You're like a Carrie with some Samantha aspects," Shoshanna told Jessa assuredly.

Girls has been largely received as inarguably feminist television that improved on Sex and the City, which, in 2017, doesn't really hold up. While in 1998, the mere fact that women were allowed to talk candidly about pleasure and desire on TV made it groundbreaking, many of its representations of sexuality and identity are now considered misguided or just plain offensive. There was a desperate need to update the show for a new generation that sees sexuality as more fluid and different body types as more beautiful — and Girls was it.

Still, Dunham's creation ran up against many of the same problems as Sex and the City. Like Carrie, Samantha, Miranda and Charlotte, Dunham's foursome was strikingly white and well-off; though they lived in New York City, one of the most diverse places in the country, their lives were shockingly devoid of any characters from different backgrounds.

These pitfalls, critics said, were reflective of the limits of Dunham's own white feminism. So when Girls aired its series finale Sunday night, viewers were already skeptical of where else the show could go. And while it's important not to conflate a character with someone's real life, both Dunham's brand of feminism and the feminism on Girls has proven itself to be insufficient for young women whose experiences extend further than that of four upper middle class white women living in Brooklyn.

Dunham's update to Sex and the City came first and foremost by way of her willingness to present her own body as the norm. Hannah Horvath didn't flaunt her body so much as display a lack of awareness towards it. If it was hot outside, she would stay cool by wearing the short-shorts that rode up just a little too much. If she was taking a workout class with her mom at a women's retreat, she'd wear a sports bra because why not? And if she'd just snorted a few lines of cocaine, well, she'd wear a mesh tank top that exposed her breasts.

Dunham's body positivity was ahead of its time. In 2012 it was all but unheard of to see a plus-size model on the runway or, say, on the cover of Elle magazine. Larger actresses like Melissa McCarthy were still cast as the "fat friend," the butt of the joke who was never allowed to have the same vibrant love or sex lives as her friends. Dunham pushed the still-nascent body positivity conversation forward unapologetically, even amid criticism that she was revealing too much too often.

This contribution to feminism is one we might take for granted now. As Jia Tolentino wrote at the New Yorker after binge-watching all six seasons of Girls, "The fact that I can watch Girls like this, five years on, seems like evidence of how well, and how specifically, the show has constructed its particular universe — as well as how quickly the show has entrenched its most radical aspects as normal."

Girls' brand of feminism, though, seems to suffer from the same blind spots as Dunham's.

The show revolved around four white women whose inner and outer circles had only a few people of color in sight. Critics slammed the Girls creator on this point early on, and Dunham found herself facing a conundrum she thought best solved by writing in a black boyfriend for Hannah in season two. While Dunham maintained she'd cast actor Donald Glover as Hannah's black Republican fling before the diversity backlash, she later admitted to Vulture that the character helped prove to the audience that she'd heard their criticism and was in a "dialogue" with them.

That self awareness, however, didn't last long. Recently, Dunham recalled a conversation she had with her boyfriend amid the controversy, at which time she insisted, "No one would be calling me a racist if they knew how badly I wanted to fuck Drake."

In 2013, comedian Lisa Lampanelli posted a photo of herself with Dunham, referring to the Girls creator as her "n***a." Many said Dunham stayed silent about the controversial caption for too long, and argued her excuse that she wasn't fond of "Twitter debates" was insufficient.

And then at the 2016 Met Gala debacle, Dunham accused Odell Beckham Jr. of ignoring her because he couldn't sexualize her, buying into racist stereotypes about black men's sexuality. Dunham apologized for this slight, too — but fans have had a difficult time ignoring the accumulation of missteps.

Writing a feminist show is no easy feat, and being a celebrity feminist has quickly become a slippery, somewhat impossible designation. From its first episode, Girls had been destined for the harsh criticism it received over six seasons. Feminist, women-created projects have always been subject to closer scrutiny than anything men have ever offered, in part due to misogyny and in part due to fellow feminists who expect more of their chosen spokespeople.

But if we zoom out, we might find — like Tolentino — that Girls is a "different and better" show than we'd been led to imagine. We might see that Dunham had created something powerful and, in some measure, relatable, even if none of us ever wanted to admit we found anything relatable in Hannah, Jessa, Shoshanna, or dare we say, Marnie's unlikeable characters.

On Sunday night, a new generation of feminists said goodbye to a show that both pushed how we see women on television and showed us the limits of certain types of feminism. Dunham's show spit us out five years later in a cultural moment where portraying young messy female characters is both far more common and still incredibly difficult to pull off.

"I hope that Girls is going to represent the moment in which it became OK for women to show the full range of their complexities," Dunham said in a goodbye video for HBO. "Being messy, or inappropriate, or sexual, or having dark urges or acting like a fucking bitch became all right and became something you were allowed to show on TV."

These were certainly among the show's accomplishments. And through these achievements other shows like Broad City, Insecure and Fleabag were able to thrive without looking anything like Girls — and, best of all, without being incessantly compared to Sex and the City.

Girls was an important show that poked at conventional visions of women on television and Dunham herself broke boundaries by being the youngest woman to ever write, produce and star in her own HBO series. But, today's vigorous feminist appetite for diverse depictions of people on television seems to have surpassed it's ingenuity.

Hopefully, the next generation of feminist shows can answer the questions Girls couldn't.