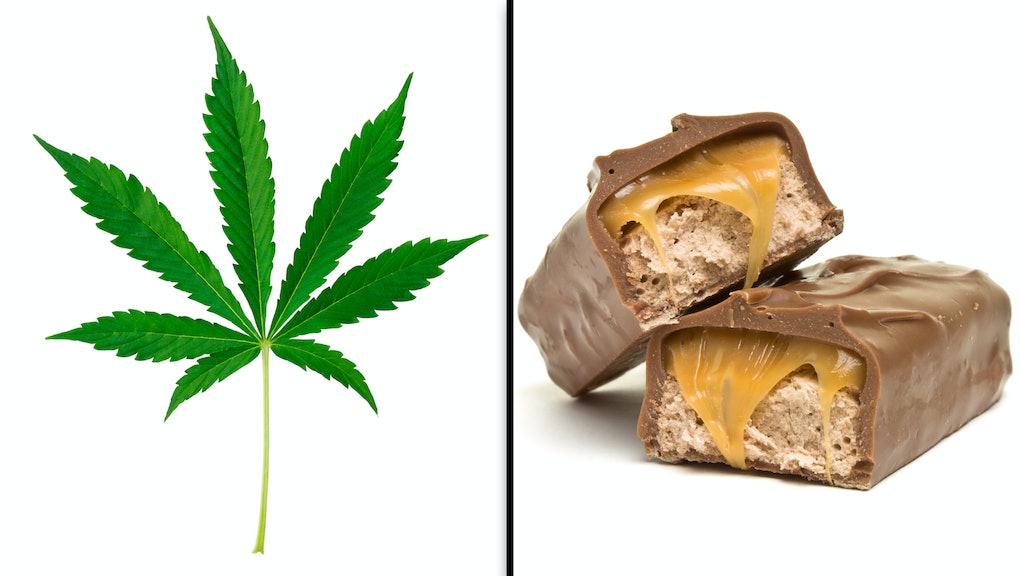 Some Americans think marijuana is harmful. Way more say the same about sugar.

When it comes to consuming potentially harmful substances, it appears Americans would rather spark a joint than unwrap another candy bar.

That's just one startling conclusion of a new study published by Toronto-based market research agency DIG Insights. Its "Cannabis Culture Report" pulls together survey responses about marijuana usage, legalization and more from 2,000 U.S. and Canadian citizens between the ages of 18 and 65.

Here's what they discovered.

Across the board, it seems as if weed has become an accepted fact of life. A clear majority of Americans (57%) support legalization, for example, with even higher support among men (61%), and that percentage climbs even higher for younger men (79%). Millennials of both genders are strongly in favor, with 68% approval in that age cohort, and 37% of people in states where marijuana is still prohibited say they are likely to use it more if it's legalized. About two in 10 Americans (22%) have used recreational marijuana in the past year.

Usage is higher among younger, poorer Americans looking to unwind

DIG found that usage is highest among Americans ages 18-34 (30%), with 11% of men in this age group using weed daily. Those making less than $60K annually are also more likely to indulge — 27% consume marijuana. Of those who make weed a habit, 24% said it was to "reduce stress and relieve anxiety," while 31% said it was to "promote relaxation and wellbeing."

Once they're high, it doesn't seem as if these users are getting up to any trouble. The most popular activities they engaged in under the influence were watching TV (52%), eating (45%), listening to music (41%) and socializing (33%). Some 31% of those surveyed said they drink alcohol when stoned, but strangely, people over 35 were most likely to combine the two intoxicants.

The myths about marijuana's dangers are fading fast

But far more telling are the shifting attitudes about weed's supposed downside. In an era when White House press secretary Sean Spicer is erroneously comparing marijuana use to the opioid crisis and staunchly anti-pot Attorney General Jeff Sessions has hinted at a crackdown on the drug — even where it's legal — Americans simply aren't buying the moral panic.

A minuscule 16% of Americans consider marijuana "very harmful," while 27% say the same of alcohol, 23% say it of processed sugar, and 33% believe saturated fat poses that level of risk — suggesting that junk food is now seen as a bigger threat to our national health than pot. And while a troubling 25% state that they have a close friend or relative whose life was negatively affected by marijuana, 51% think weed is potentially beneficial for users, and only 32% subscribe to the notion that regular users are less successful in life.

The dangers of sugar, meanwhile, are well-established

Although marijuana use may have some adverse effects in the long term, research is scarce and sketchy, in part because a continued federal ban on the drug makes it difficult to legally study. We know a lot more about what regular sugar consumption does to your body over the years, and it's not pretty.

Sugar is addictive, for starters. Sugar — and not fat — may be the true villain in the obesity epidemic. And even if you're not overweight, sugar may raise the risk of heart disease. It has a toxic effect on the liver, not unlike alcohol. It could fuel the growth of cancer, make our cells age faster and help cause type 2 diabetes. Some researchers have gone so far as to call sugar a "toxin."

No wonder people are now more wary of sugar than weed.

It's never been easier (or safer) to purchase marijuana

Finally, 73% of Americans reported feeling quite safe when buying marijuana directly — even though 47% of those customers are purchasing it from someone at their residence, not a licensed dispensary — and half say they've never been concerned about police intervention. Even where it's legal, just 57% of marijuana users buy it from a dispensary, again confirming people's casual relationship with its broader illegality. The typical order is a quarter ounce or less, and the average price per gram is a very reasonable $10.

What does it all mean?

Between people's increasing comfort with marijuana culture, their belief in its positive aspects and relative distrust of far more common American vices like drinking and fast food, it certainly looks as if the country is trending in a weed-friendly direction. Of course, voters and legislators have a long way to go before the U.S. becomes a pot-lover's paradise. The next few election cycles are sure to be pivotal as we decide what shape our federal policy should take.