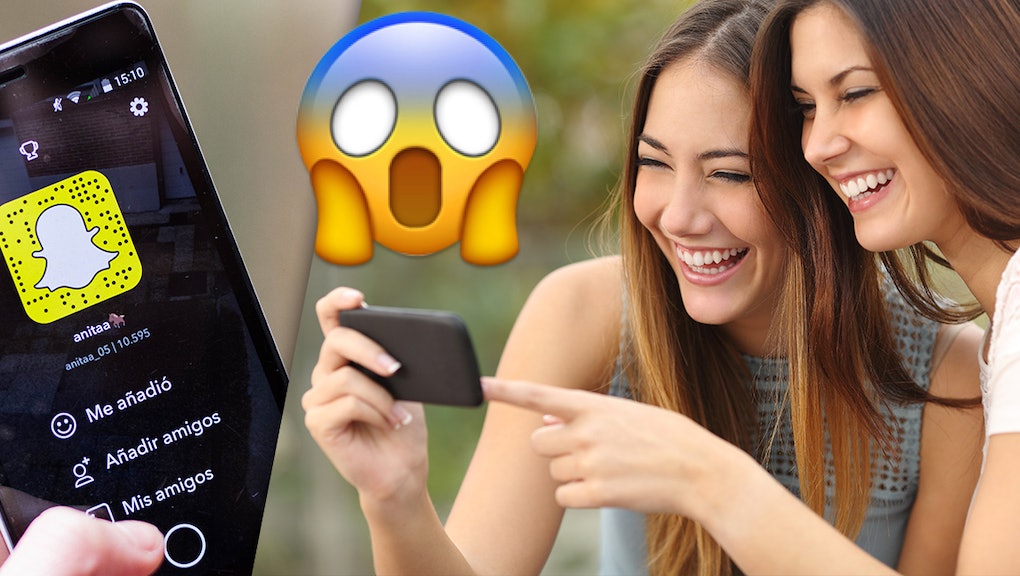 Navigating the social dynamics of an app like Snapchat can be challenging.

Like any social network, Snapchat has its own unspoken code of conduct that can seem like an utter mystery to outsiders. Some people are barely learning which way to swipe when they inadvertently commit their first Snapchat faux pas, much less have any idea about things like the meaning of a streak.

We spoke to 17 teens about Snapchat etiquette, the app's universal dos and don'ts, and how to become a top-notch snapper. Here are all the etiquette tips you need to know.

We've all seen the person who goes to a show and snaps 87 videos of the band on stage. We get it, you went to a concert.

"If you're at a cool location, just snap one or two pics," says Rafael Singer, a 14-year-old from Los Angeles. "We just want to see where you are and the cool location you're at. Once you give a general idea of the place you're at, that's enough. You don't need to post your whole album on Snap; that's spammy."

It's also a lot for someone to tap through. "People don't really want to tap through too much stuff," says Michael Sheldon, a 16-year-old in Arlington, Virginia.

"Stories are cool and people enjoy them to see a few five-second glimpses of what people are doing, but they don't want to see a five-minute-long thing," Sheldon explains.

2. Don't DM your friends snaps that appear in your story

Speaking of stories, if you follow someone on Snapchat, chances are you're going to view their story. One of the cruelest things you can do to a person is to direct-snap duplicate content from your story to their inbox.

It would be like if every time I posted an Instagram, I direct-messaged my post to all my friends and said, "Did you see this?" They saw it.

It would be like if every time I posted an Instagram, I direct-messaged my post to all my friends and said, "Did you see this?" They saw it.

"Everyone already got the memo!" Singer says. "It's annoying to see it twice."

Peter Santa Ana, an 18-year-old in Honolulu, agrees. "When you do that, it's like, why did you even send that to me? I saw it."

3. Tailor your direct snap to the person you're sending it to

When you do send direct snaps, think about the person you're sending it to. Avoid blasting out the same pic to all of your friends.

Direct snaps are meant to be a personal message, one-to-one, and so the implication is that you're sending the photo to just that person.

"Don't send people snaps that seem like one-to-one when you've actually sent it to so many other people," says Kelly Bell, a 15-year-old in San Diego.

"It's annoying because you think you're friends with someone and have a close relationship with them, because, like, hey, they direct-message you. But really, they're just bored and send that to 40 other people. It makes you feel awkward."

Another thing that can make people feel awkward is "open-boxing." That's when you open someone's direct snap, but don't reply — not even with an "lol." This is extremely rude. It sends a message that you're intentionally blowing off your friend.

"People don't like when they're … left hanging, and that's exactly what you do when you open-box them," says Alondra Tacuyan, an 18-year-old from Mukiltel, Washington. "Snapchat is one of the most-checked apps and it's really obvious when someone doesn't respond to you or opens and ignores your message. People really pay attention to whenever it happens."

"If you're friends with somebody but you open their snaps and don't respond, you don't really want to do that," adds Will McKelvain, a 15-year-old from Arlington, Virginia.

5. If you do get open-boxed, take the hint

If someone continually opens your snaps and ignores them, it's time to stop direct-snapping them.

"If someone's not interested in snapping you, like if they open your snaps and don't respond, don't continue to snap them — it's sort of rude," Sheldon says.

Snapchat isn't like Instagram or Twitter. There are no public follower counts and it's not a race to see how many connections you can amass. Keep your network small, and limit it to people you really talk to.

"I usually try to [limit] my friends to people I know and people I could have a conversation with," McKelvain says. "If you just friend as many people as you can, it's really shallow and people catch on to that."

"My mom has her own friends on Snapchat now," Weeks says. "They even have their own streaks! I taught her. I think she has, like, five."

So, what does "streaks" mean, exactly? Snapchat streaking means sending consecutive snaps back and forth directly with someone for as long as you can. Snapchat rewards streaks with certain emojis based on the amount of time you've been streaking.

But that doesn't mean you should send someone spam every day just to keep a streak alive.

"Don't send a completely black screen for streaks; it's so lame and boring," Peter Santa Ana says. "It's like, what's the point of the streak? Make it a conversation."

8. Selfies are OK — in moderation

While selfies have become known as Snapchat's signature content, try to mix it up and post photos of things other than your face occasionally. People like to see what you're doing or where you are, and an endless stream of someone's face can get dull.

"Don't take really long videos of your face and put them on your story, especially with weird filters," says Jules Spector, a 16-year-old in Brooklyn. "It's sort of uncomfortable. That's just a no."

While it may feel awkward at first, the default viewing experience on Snapchat is in vertical view.

There's nothing more cumbersome than having to turn your phone and view a snap. If you want to show a larger scene, just pan the camera or make a video.

Ultimately, there are no hard rules when it comes to Snapchat etiquette. While these tips may serve as guidance, the most important thing is to be yourself.

People like Snapchat because it provides a raw and unstaged look into someone's life, so try not to take it too seriously. All the teens we spoke to admitted to breaking at least one of the above "rules" at some point.

"I've learned these all the hard way," Jules says. "Not the videos-of-my-face thing, but other stuff. Ultimately it's your account, so do what you want."

Darien, a 13-year-old from Westport, Connecticut, says that it's up to your friends to decide what's weird or not. She says her friends from school would make fun of the snaps her friends from camp would think are cool, and vice versa. It all depends on your network.

Sam DeMaria, a 15-year-old from Dobbs Ferry, New York, sums it up this way: "I say, have fun, go crazy. Really, it doesn't matter."

This article was originally published on April 21, 2017