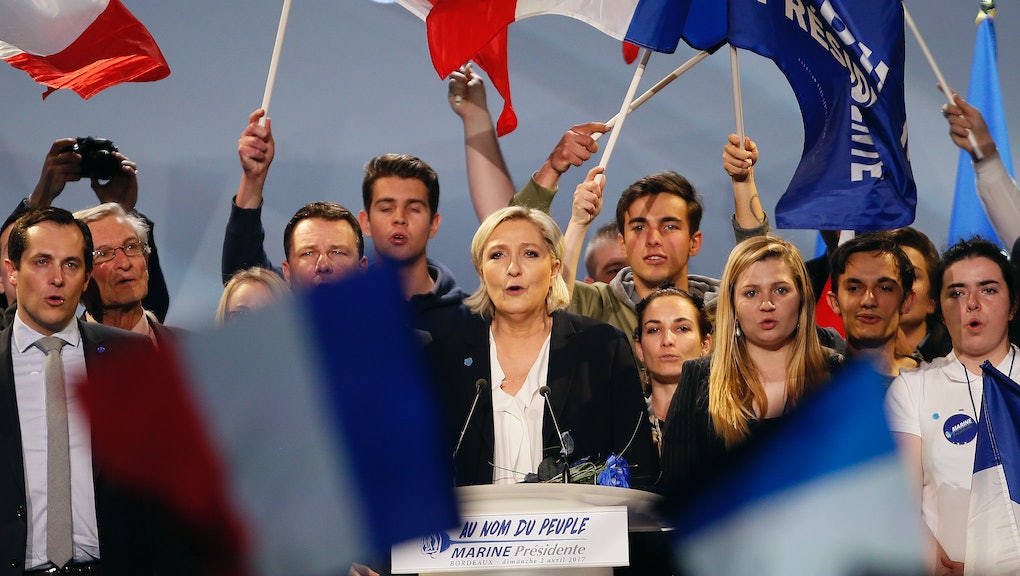 Bernard-Henri Lévy: Le Pen won't win because "France is not ready for a fascist regime"

Thursday's deadly shooting of a police officer on Paris' Champs-Élysées by a suspected terrorist has cast a dark cloud over the country's upcoming presidential election, which is set to take place over the weekend.

In response to the apparent terrorist attack, France's far-right presidential contender Marine Le Pen has called on the country to immediately close its borders and expel foreign nationals on the country's terrorist watchlist.

President Donald Trump predicted the attack will directly impact the outcome of the election. "Another terrorist attack in Paris," Trump wrote on Twitter. "The people of France will not take much more of this. Will have a big effect on presidential election!"

With just two days to go before the first round of voting on Sunday, the incident serves to underscore the high stakes in what has become yet another highly contested election that marks a crucial test of the future strength of far-right nationalism in Europe.

Right now, the election boils down to a contest between Le Pen, who is the leader of the far-right National Front, and Emmanuel Macron, the 39-year-old centrist candidate, who previously served as France's economic minister. The two candidates are deadlocked atop the polls.

The next closest candidates are former Prime Minister François Fillon, who is mired in various corruption scandals, and Jean-Luc Mélenchon, the far-left candidate who has been surging in recent weeks. The top two candidates will enter a runoff vote on May 7, and polls currently indicate that Macron would likely defeat Le Pen if the two entered a head-to-head vote.

The election has France on edge. I recently spoke with Bernard-Henri Lévy, or BHL as he is affectionately known, who is one of the country's leading public intellectuals and an outspoken critic of Le Pen. Over breakfast in Manhattan, BHL told me flatly that Le Pen will not win the presidency.

"I predict Marine Le Pen will not be elected because she's a fascist, and France is not ready for a fascist regime today," he said. "France was once ready for fascism, before World War I. And surely there is a connection to her amongst 25 to 30% of the population. But she will not win today."

"I predict Marine Le Pen will not be elected because she's a fascist, and France is not ready for a fascist regime today."

I reminded BHL, however, that elites similarly discounted Donald Trump in the U.S., to which he conceded there's no telling what could happen in the campaign's final days. My conversation with BHL also occurred before the latest attack, which could serve to embolden Le Pen, who has campaigned on a hardline platform on immigration and terrorism.

The truth is no one knows what will happen, but what's clear is the French election has far broader implications beyond the country's borders. The contest poses the next major test for the strength of populist politicians worldwide, on the back of Trump's surprise victory and the Brexit vote in the United Kingdom.

In a recent blow to the far right, the Dutch Islamophobe politician Geert Wilders recently lost by a significant margin in the Netherlands. Yet far-right parties remain on the rise in Europe. The French election, along with Germany's September federal election vote, will serve as an important signal for whether Trump's election was merely a blip, or if far-right nationalism is here to stay on the world stage.

Marine Le Pen's father, Jean-Marie Le Pen, is a former presidential candidate and founder of the National Front, and he is a notorious Holocaust denier who once advocated for quarantining people with HIV.

Just as a Le Pen victory would send shockwaves across Western Europe, it would also be a boon to Russian President Vladimir Putin, who has made no secret about his support for Le Pen. Putin even recently met with the candidate in Moscow.

During our conversation, BHL repeatedly referred to Le Pen, Putin and Trump as "the triad," unified by their desire to peddle "the hoax that there is a connection between the refugee crisis and terrorism." Just like Trump, Le Pen has expressed her admiration for Putin and also backed the Russian annexation of the Crimea.

In Le Pen, Putin sees a potential ally who could shift the balance of power in Europe and help create chaos that would allow Russia to grow its influence across the continent.

Putin has said publicly that Russia has no intention of meddling in the French election. Yet, in December, it was revealed that Le Pen requested a $30 million dollar loan for her campaign from a Russian bank with close ties to Putin. The National Front, Le Pen's party, has also admitted taking a $11.7 million loan from a Russian bank in 2014 after being denied funding from French financial institutions.

To most political observers, it's clear Putin is working actively to tip the balance in Le Pen's favor.

"The Kremlin has a candidate in mind, just as it had one in mind for the U.S. election."

"The Kremlin has a candidate in mind, just as it had one in mind for the U.S. election," said Naz Durakoglu, a senior fellow at the Atlantic Council who previously served as an official working on European issues in Barack Obama's Department of State. "For Putin, [a Le Pen victory] would be a big deal visually, for the world to know that the Kremlin is able to boost a candidate that is so far right. Le Pen also has the ability to actually change policies that really matter for Russia, whether they be sanctions or any kind of international policy."

France's top intelligence agency, the Directorate-General for External Security, also believes Russia is working actively to support Le Pen's candidacy in other ways. According to reports from the Atlantic Council's Digital Forensic Research Lab, Russia may be employing an army of social media bots to amplify positive messages about Le Pen. The messages appear to have their origins in Russian state-run media outlets and are aimed at spreading negative messages that discredit her opponents.

"They get the messages out through RT or Sputnik — two state-run Russian media outlets — "and then they use a number of botnets and social media platforms to amplify that message," Durakoglu said. "They're amplifying a message about how Le Pen is amazing and also about how Macron and others are terrible. It's astonishing that this is a foreign government intervening in elections over and over again."

Just as in the United States, WikiLeaks has also joined the fray and recently published 3,600 documents on candidate Fillon.

Whatever the outcome, there's much at stake in an election that both Trump and Putin are watching closely. If Le Pen follows in the footsteps of Trump and pulls off an upset, the result will be a major show of force for Russia with far-reaching implications for the global order.

"France could be the next win for Russia," Durakoglu said, "and if it turns out the way they want it to, they will look really powerful."