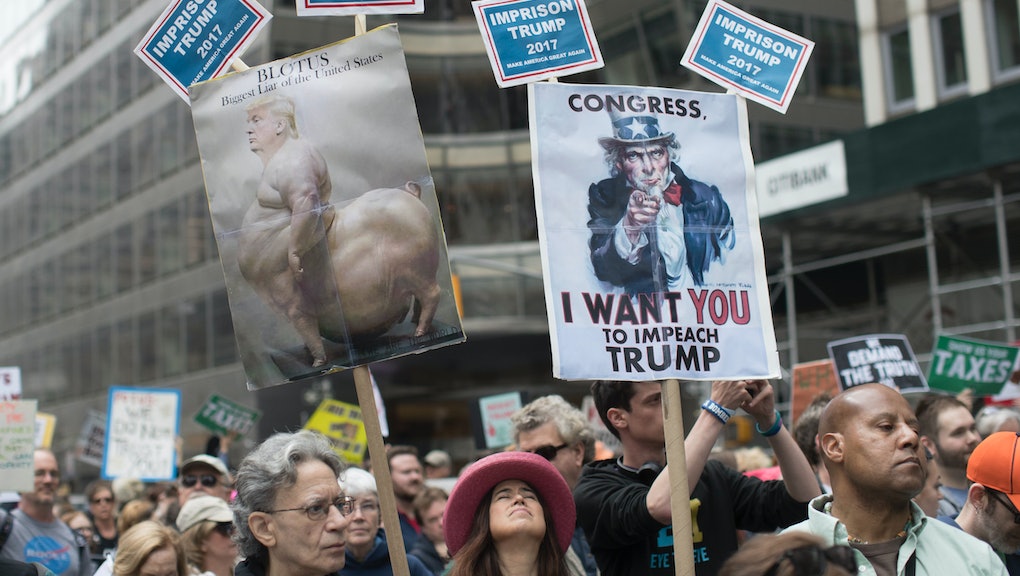 Trump said nobody cared about his tax returns. The Tax March protests prove him wrong.

Protesters across the country on Saturday turned up in large numbers to demand that President Donald Trump release his tax returns — something he said "people didn't care" about.

Tax March demonstrators flooded the streets of Washington, D.C., New York and other cities to protest Trump, who was the first presidential candidate in modern history not to release his tax returns.

Protesters say the returns could reveal if Trump has any conflicts of interest and if he has contributed his fair share of taxes.

The protests, which included a march on Mar-a-Lago — Trump's private Florida resort where he is spending the weekend — also featured prominent U.S. leaders, including Rep. Maxine Waters (D-Calif.).

"We're going to stop his ass," Waters said before the protest to wild cheers.

Protesters turned up by the thousands at marches across the country Saturday, ahead of Tax Day on Tuesday.

Organizers say that 25,000 protesters demonstrated in the Tax March in D.C. and the march was anticipated to be the largest since the Women's March in January.

Images of the protests in D.C., New York, Los Angeles, Chicago and more than 100 other cities spread across social media.

A large crowd of anti-Trump protesters also turned up at Mar-a-Lago in Florida Saturday afternoon. The president, who is at his resort for the seventh weekend since becoming president, reportedly took a different route from Trump International Golf Club to Mar-a-Lago to avoid the protesters.

Jennifer Epstein, a White House reporter for Bloomberg, tweeted a video of protesters along the route from the golf course to the Palm Beach club.