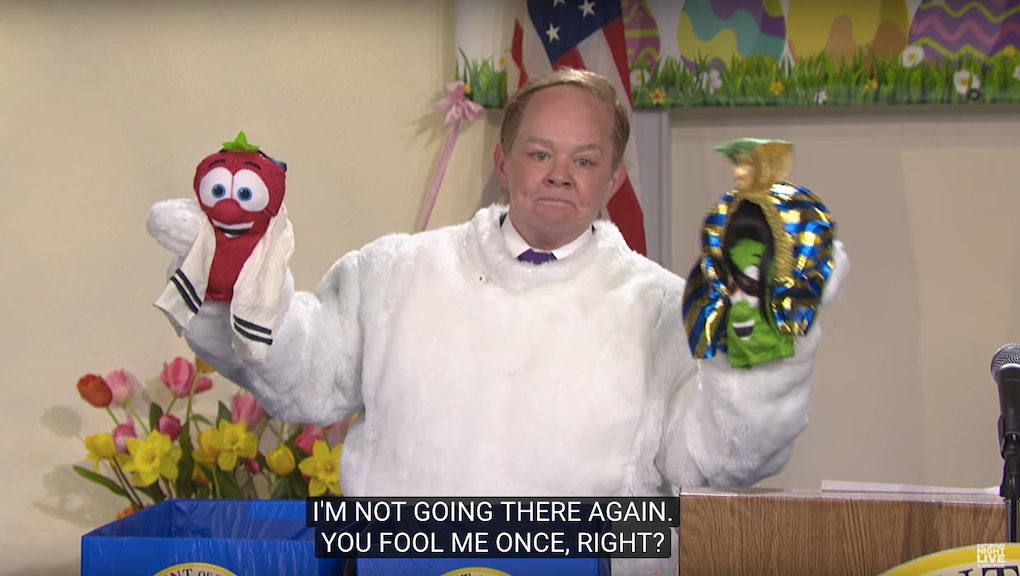 Two things Sean Spicer may never live down? His stint as the White House Easter Bunny, and those stunning comments on Hitler and chemical weapons.

So naturally, Saturday Night Live brought the two themes together for the Spicey-est spoof press conference yet.

Melissa McCarthy reprised her role as the White House press secretary on this week's episode, marching onstage in a terrifying bunny suit and scattering some children ostensibly gathered for Monday's disappointing Easter egg roll to deliver a very gruff apology.

"Shut up," McCarthy-as-Spicer barks at reporters, tossing the rabbit head aside. "Don't push me, I'm sweating my Easter eggs off in this thing." (Spicer once told Politico that things get "very hot" in the bunny suit.)

"Everybody shut up, so I can apologize," McCarthy's Spicer continues. "Yes, you all got your wish this week, didn't you? Spicey finally made a mistake."

"Spicey" then goes on to recall the astounding gaffe he made Tuesday, while explaining President Donald Trump's decision to bomb Syria in response to the chemical attack Syrian President Bashar Assad — or, as McCarthy's Spicer called him "Bazooka Felicia Amad Rashad" — launched against his own people.

The real Spicer said that Hitler "didn't even use chemical weapons," which is patently false. He then attempted to backtrack and failed, explaining that Hitler was not using gas on his people "the same way that Assad is doing" and offered some nonsense about "Holocaust centers."

"And everybody freaked," as McCarthy's Spicer put it. "They were all like boo hoo, boo hoo what about the Holocaust centers? And yeah I know they're not really called Holocaust centers, duh. I know that. I'm aware. I clearly meant to say concentration clubs, okay? Let it drop."

"It would be really great if the nitpickers could try to see the big picture and didn't solely focus on every little slur and lie I say," McCarthy-as-Spicer added.