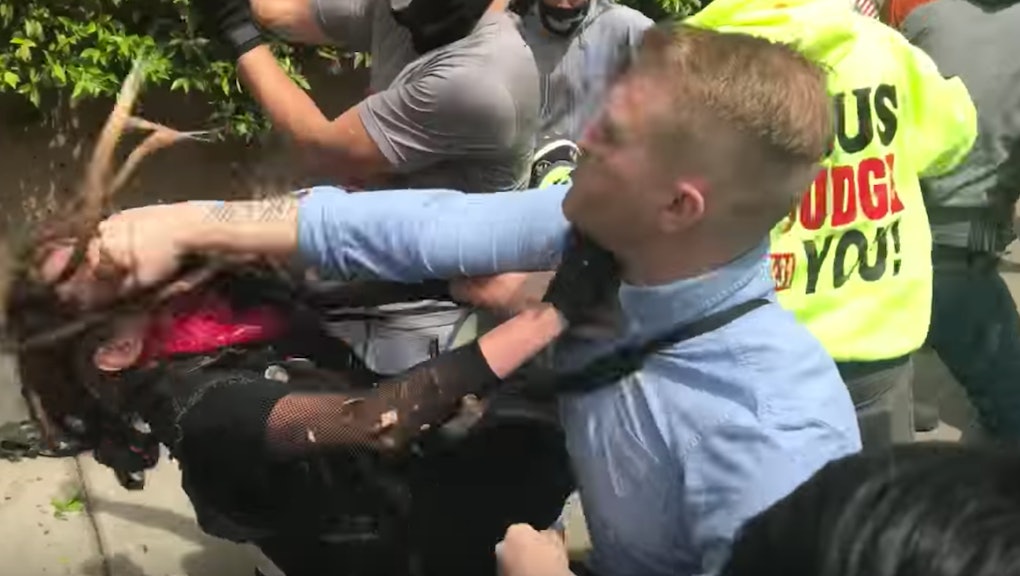 The fight that broke out between the two groups was recorded and posted on YouTube by the organization WeAreChange. In the video, which at time of writing has accumulated nearly 250,000 views, a female protester can be seen getting punched in the face by a male demonstrator.

The demonstrator who punched the woman appears to be Nathan Damigo, a white supremacist member of the "alt-right" movement. It is unclear from the video what transpired in the lead-up to the punch between the two demonstrators.

Damigo was confirmed to be at Saturday's pro-Trump rally, posting a live video of the event via Periscope. The Modesto Bee and Los Angeles Times reporter Hailey Branson-Potts — who profiled Damigo for the L.A. Times back in December — both identified Damigo as the man punching the woman.

The white supremacist, a 30-year-old student at Cal State Stanislaus, is the founder of the alt-right group Identity Evropa. According to the L.A. Times, the group describes itself as a "generation of awakened Europeans ... [who] oppose those who would defame our history and rich cultural heritage." To apply, aspiring members are asked to indicate whether "you and your spouse/partner [are] of European, non-Semitic heritage."

In 2007, Damigo was convicted of armed robbery after robbing a cab driver he suspected of being Iraqi at gunpoint. He spent four years in prison for his crime, the L.A. Times notes, where he became influenced by such books as My Awakening by Ku Klux Klan leader David Duke.

Many on social media are calling for Damigo's arrest in the wake of his alleged punching, and a web page has been set up by the Stop Hate Alliance imploring CSU Stanislaus' leadership to expel the student for his actions.

At least 20 arrests were made during Saturday's protest, SF Gate noted. Though billed as a "peaceful, free-speech" rally celebrating Patriot's Day, the event quickly descended into a battle between alt-right Trump supporters and liberal "antifa" — meaning anti-fascist — demonstrators.

A barrier dividing the two groups was broken during the protest, prompting the protesters to begin a violent brawl. During the rally, the opposing groups reportedly threw shoes, bottles and fireworks at each other, and 11 people were injured during the conflict.